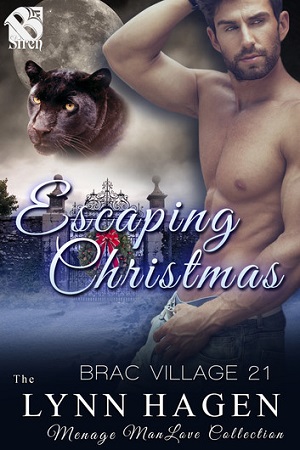 Review: Each book in the Brac Village collection features a new romantic couple. To enjoy the overall story arc and crossover characters, I would recommend reading the series in sequential order. However with this series, I would start reading Brac Pack first. It will lead you into Christian’s Coven, Zeus’s Pack, Demon Warriors and so forth. This is one action packed adventure.

Robbie and Abner have been mated just a few weeks, however Robbie has been hiding a secret from Abner, or so he thinks. He is an impala shifter. It is almost Christmas time, but to Robbie that is one day away from hell. Abner however loves the holiday and whats more he loves Robbie. He is a human living in a paranormal world, although he only thinks bear shifters exist. His eyes are about to be open to a lot more, especially when Malachi shows up.

Malachi is a panther shifter and he has found his mates, two of them, who would have thought. Although it was not the best of meeting them since he drenched them with muddy water. Things are going to get crazy, especially since a deer is stalking Robbie and there is a rogue on the loose.

As always Lynn has done an amazing job with this story. It caught my attention from the start and kept it all the way to the end. Although Kota will be begging Blair’s forgiveness. As always this is a world I would love to live in. Sexy men who turn into shifters, crazy mates, danger and excitement and hot sex is just a bit of what you get with this story. I had a blast reading it and can not wait to get my hands on the next book.