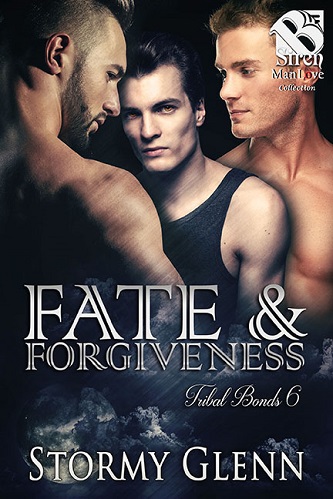 Blurb: Roman is a hunter, tasked with finding and eliminating those who break the laws set down in a treaty between the humans and the paranormals. After being held captive and tortured for months, he’s more than ready to track down the one man he couldn’t stop thinking about. It was just too bad Seth wasn’t where he left him.

Wolf shifter Seth Connelly has a deep hatred of hunters. In his mind, they have done nothing but kill his kind for centuries. He fully believes that every last one of them needs to be wiped from the earth. When he meets an attractive man in a local bar and takes him home for the night, Seth never dreams that the man he spends the night with is his mate—and a hunter.

Vampire Casey is sent to deliver a message to a wolf shifter hiding out in the mountains. Before he can reach his destination, he’s attacked. He shows up on Seth’s doorstep, bloody and bruised, and never dreaming fate had a plan for him even he couldn’t imagine.

Standing on different sides of a war that is quickly coming, Roman, Seth, and Casey have to learn to put their hatred aside and work together to eliminate a new threat to them all. Failure to do so could mean more than their lives. It could mean the end of everything, including the growing love that neither of them can deny…but sometimes, hatreds run very deep.

Review: Each book in the Tribal Bonds collection features a different romantic couple. To enjoy the overall story arc and crossover characters, I would recommend reading the series in sequential order.

Seth has met his mate, loved his mate then abandoned by him. It would seem that Seth being a wolf shifter was to much for the big bad hunter. Then when he almost got a friend killed because of his anger, he just wanted to be off the grid. To bad his brother wouldn’t let him. But he had not expected the cute vampire who was bloody to not only be on his step but to be another mate. Not that the ass believed the man, he had no clue what he was in for.

Roman was not only a human but a hunter who hated most paranormals, or so he used to in the past. He was getting over it but to find out that the man he slept with was his mate was a bit of a difficult thing to get over. However he wanted to make up for it. So imagine his surprise to find out about Casey.

Casey was a vampire sent on a mission to deliver a message. He had not expected to get beat up by others nor had he expected to wake up to a mate. Not that the man believed him. Casey was a sweet soul who just wanted his mate. When danger showed up and Casey is placed in danger, guess who shows up to help him.

I am not normally a fan of threesomes but Stormy always has me changing my mind. Out of all the characters I must say that Casey is the one I liked the most. He is just a cutie. However I did understand Seth’s pain as well. These three together is one hot sexy time. Danger, excitement and so much more is what you get with this story. And let me tell you that I had to finish the whole book in one sitting. I can guarantee that this is one of those books that will be read more than once.

I had a blast reading this and can’t wait to read the next one. I would definitely recommend this book and the ones before it.