Hi guys! We have Andrew Grey popping in today with his newest release Fire and Agate, we have a short guest post from Andrew, and a great excerpt so check out the post and enjoy! ❤ ~Pixie~ 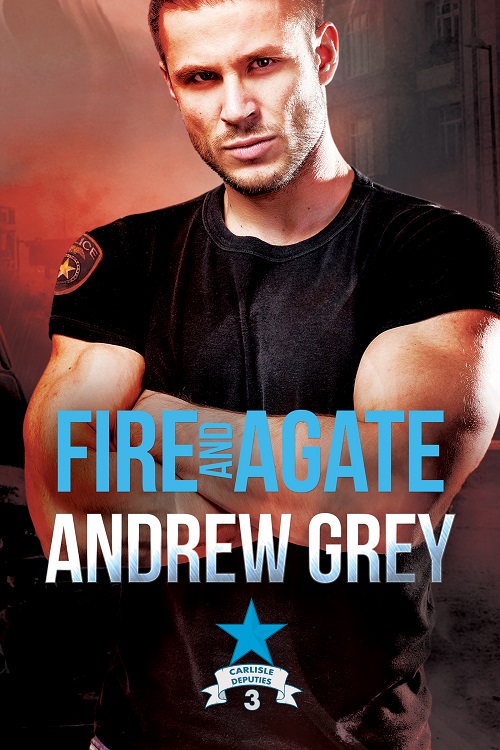 When Chris Anducci is moved off jail duty and into the sheriff’s office, he doesn’t expect his first assignment to be protecting a witness against a human trafficking ring. Knowing the new sheriff doesn’t abide screw-ups, Chris reluctantly agrees to work the case.

Chris opens his home to Pavle, but he doesn’t expect Pavle and his story to get under his skin… and stay there. Soon they discover they have more in common than either of them thought. Slowly Pavle comes out of his shell and Chris finds someone who touches his heart. But as the men looking for Pavle close in, they will stop at nothing to get him out of the way. But even if Chris can keep him safe, he might not be able to protect his heart if Pavle moves back home.

1)  Lethal Weapon –  I just love this story and the young Mel Gibson is hot.

2)  Beverly Hills Cop – Amazing movie and with so much humor.

3)  Gosford Park – a mystery with a bumbling cop.  Think Downton Abbey with murder

4)  Widows Peak – While not a cop movie, it is a mystery and you will love the twist at the end.

5)  Blazing Saddles – Laugh my butt off Slowly a figure, curled up and small, made an appearance from around the side of the dresser. The first thing Chris noticed were the biggest, brownest eyes he had ever seen, filled with the pain of years of hurt. They blinked, and then Pavle stepped farther into the light. Even standing, he looked half hunched over.

“This is Deputy Chris. He’s here because he’s going to help keep you safe.”

Pavle raised his head slightly, his black hair, long and uneven, falling to the sides of his face.

“Hello,” Chris said, mimicking the soft tone the others had used. “I’m Chris. They told me you needed help, so I’m going to protect you so no one hurts you anymore.” In that moment, he made up his mind to do whatever was needed to help this man, and if that meant moving him into his home to protect him, so be it.

“I’d like it if you went with Deputy Chris. He is a good man and will not hurt you,” Marie explained slowly and gently.

Chris didn’t expect Pavle to believe her or to agree to come. “It’s okay if you don’t want to,” Chris said, crouching down so he was at the same level as Pavle. “This is your choice.”

“Choice?” Pavle asked in a raspy voice that tore at Chris’s insides, looking at him and then back to Marie.

“No. He is good man. Caring. He will help you.” Marie seemed to have infinite patience.

Pavle blinked, standing still, then nodded and walked to Chris. It seemed as though he either didn’t understand or thought he didn’t have a choice, even though he was being given one. Chris held out his hands, palms up, to show that he wasn’t going to hit him. When Pavle looked at him with those huge eyes and the face of an angel, he looked much younger than the twenty-four listed in his file. Maybe that was his previous owner’s fetish. Still, after all he’d been through, Pavle’s handsomeness and light shone through, with soft features and an almost delicate frame.

Marie extended her hand to take Pavle’s gently. He went with her in silence. She led him out of the house, and once they were in the sun, Chris got a better look at him. Pavle was pale, probably from years of being inside. Chris reminded himself to ask Marie about any past injuries. He suspected that Pavle had been treated very badly in the past and he needed to know if he was okay physically.

“Thank you for doing this,” Marie said once she had opened the door to Chris’s car and gotten Pavle settled in the passenger seat. He sat without moving or looking to either side. “You have to keep him safe. He is the main witness against the man who held him for nearly two years. We need to get that man and then trace back to the people who sold Pavle to him. We’re pulling each thread to see what we can unravel.”

“I’ll follow you to your house and help Pavle get settled.”

As Marie got to her car, Pavle reacted for the first time.

“She’s just riding separately. She will be back in a few minutes.”

Chris drove the short distance to his house and pulled into the garage. He didn’t want Pavle to be seen, and yet he also didn’t want him to feel like a prisoner again by being hidden. He got out and waited, hoping Pavle would get out on his own. After a few moments, Pavle opened the door and climbed out of the car. Chris opened the door to the yard and motioned for Pavle to go ahead of him.

Marie came though behind him, and Chris closed the garage doors and joined the two of them in the yard. Pavle looked around, saying nothing. Chris wished he would say something… anything. He was way too quiet, and that worried Chris because he had no idea what he was thinking, and damn it all, those eyes still held buckets of fear.

“It’s okay. This is where you are going to stay.” Marie gently coaxed Pavle toward the house, and he shuffled along, looking at the yard. Hopefully he liked what he saw. Chris had spent too many hours working out stress for the garden to be unappreciated.

Chris opened the back door, went inside, and turned on lights, letting Marie bring Pavle in the kitchen, motioning toward the living room. Maybe this was the biggest mistake of his life. He wasn’t equipped to handle someone as fragile and frightened as Pavle. Chris had no clue what he needed or even how to get through to him.

“I sold?” Pavle finally asked barely above a whisper.

Chris caught Marie’s gaze, and his heart twisted in his chest. God, this was going to wrench his guts six ways from Sunday.

“No. This is where you are going to live. You are not going to be sold to anyone any more. Deputy Chris is here to help you and nothing more.” She patted his hand and took Pavle through to the other room.

Chris got three glasses of water and put some cookies on a plate. He needed some sugar if he was going to get through this in one piece.

Marie and Pavle were talking softly on the sofa when Chris handed each of them a glass and offered them cookies. Marie took one, and Pavle stared at the plate as though it were a foreign object. Finally, he took one and ate a small bite before shoving the whole thing in his mouth, chewing and swallowing like he hadn’t eaten in days, then he drank the entire glass of water.

Chris offered him another, and Pavle took it in disbelief, ate it quickly, and then rested his hands in his lap.