Hi guys, we have Aidan Wayne popping in today with their new release His Leading Men, we have a great excerpt and a brilliant giveaway so check out the post and enter the giveaway! ❤ ~Pixie~ 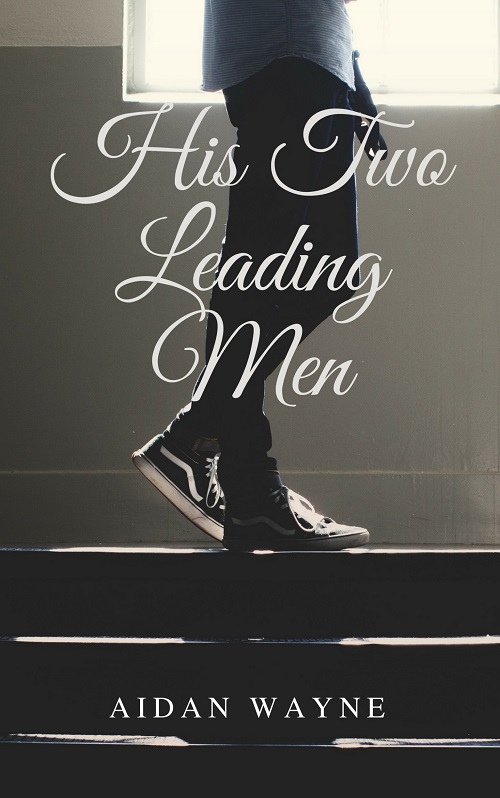 On the surface, he’s living the New York Dream – acclaimed by critics for his stunning debut, playing to packed audiences every night.

They don’t know the truth.

Battling crippling anxiety, every show is a struggle for Skye. Only one thing gives him the courage to step into the spotlight every performance – the steady, calming support of costumer Russell. But Skye can’t burden Russell with all his demons…

When wealthy patron Brent takes an interest in Skye, everything the actor knows is turned upside down. Charismatic and confident, Brent is everything Skye isn’t… and just what he needs. But how can he choose between gentle Russell and magnetic Brent? Russell means so much to him, but the chemistry between Skye and Brent is undeniable.

Or does he have to choose at all…? Quick changes, Skye decided as he scrambled offstage yet again, were the worst part of any show. It was the start of full-dress rehearsal week for the Broadway debut show Child’s Play, so he was figuring out how to get into and out of his costumes–and in time to scale the ladder to the height of center stage so he could descend from the ceiling. He’d botched it twice already, not making it in time for his cue, and he was a mess of nerves trying to get decked out in his light-up tuxedo while he paid attention to the music.

“Hey,” his quick-changer murmured as he affixed Skye’s mask. “You’ve got this.”

Right. Skye nodded and hurried over to the ladder.

After rehearsal was over and the cast was undressing and taking off makeup, Skye decided to track down the quick-changer. His calm amidst the storm had really helped, and Skye wanted to say thanks.

It had been chaotic and dark, but Skye didn’t have a problem remembering what he looked like. Taller than Skye, with dark brown skin and kind eyes.

He found him fixing costume pieces on their hangers, and seeing him in full light–he looked more like someone who should be modeling clothes, over making them. “Hi,” Skye said, trying to sound more confident and less shy. “Uh, I’m Skye. I don’t think we’ve been introduced?”

The quick-changer chuckled, a low, throaty sound, and held out a hand. “Russell,” he said. “And I know who you are. Hard to miss the Power Prince.”

Right. Skye was still in full makeup. He, at least, was easy to recognize. He ruefully rubbed the back of his neck. Skye tried his best to get to know the stage crew, but between them and the cast there were a lot of people to keep track of. Once the show was up and running for a few weeks he’d definitely be better at it, but people sort of stayed in their little boxes during rehearsals. They didn’t meld properly into one complete unit the show actually started. But Russell he wasn’t going to forget. “I just wanted to say thanks.”

“For, you know, encouraging me back there. I really needed it. And it helped a lot.”

Russell smiled at him. “Happy to help.”

“Yeah, uh–” It didn’t feel like enough, just saying thanks. And he didn’t know the guy yet–but it’d be a good idea to get to know him. Especially considering he’d be the one helping Skye strip down and then dress back up twice a show. “Are you busy, now that rehearsal is done for the day?”

Russell shook his head. “Just need to finish prepping this all for tomorrow. Shouldn’t take me long. Why?”

“You want to grab a bite to eat together?”

“Want to meet by the back door when you’re ready? I have to take all this off anyway.”

Russell chuckled again. “I might be done before you are, but sure, yeah. Meet you then.”

He left to go peel off his costume, unpin his wig, and take off all the stage makeup. In the end, he just wiped off as much as he could manage. He was pretty sure all Broadway actors had perpetually lined eyes at this point. Well, it wasn’t like he minded that much–it did make his eyes pop.

When he was dressed in real-people clothes again, he grabbed up his bag and left for the backstage door. A few people were still milling around, but Russell was standing a little off to one side. Not checking his phone or anything, just watching what was going on around him.

Skye went up to him. “Hey,” he said. “Thanks for waiting. Looks like you were right; you were done before I was.”

Russell blinked at him and then laughed. “So that’s what you look like when you’re out of makeup. I’ve been wondering.”

Russell shrugged. “I mean, I’ve seen everyone’s playbill headshots, but by the time I get to most of you, you’re all in makeup, if not costumed.”

“I thought you were one of the costumers.”

“Yeah, but that mostly means I’m sewing or repairing or washing. I just get put on the quick-changes once we get into dress shows. I’ve got fast fingers.”

Skye laughed. “Okay, good to know. And, I mean, I appreciated them. You’re going to be the one working with me?” Hopefully he didn’t sound to eager.

“Yup. For the changes on that side of the stage that need an extra pair of hands, I’m your guy.”

“So where we headed?”

“Oh, uh,” Skye might not’ve thought that far. “What are you in the mood for?”

“You pick. You were the one who did the inviting, after all.” Russell grinned at him.

Skye tried not to panic. He wasn’t so great at choosing things. “Um.” There was that burger joint a block away that he and the others frequented a lot, that might be a good place. But maybe that was too fast-foody? There was a sushi bar pretty close by too, but Russell might not like that. Maybe–

“Actually,” Russell said after what was probably too long a pause on Skye’s part, “I could really do with a burger. That sound good to you?” Aidan Wayne has been publishing LGBTQ+ fiction since 2016. While they usually stick with contemporary romance (both adult and YA), some soft sci-fi/fantasy has been known to sneak in as well. They primarily write character-driven stories with happy endings, because, dammit, queer people deserve happy endings too. Win one of 5 ebooks of Rule of Thirds!