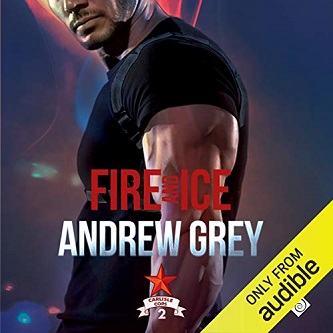 Blurb: Carter Schunk is a dedicated police officer with a difficult past and a big heart. When he’s called to a domestic disturbance, he finds a fatally injured woman and a child, Alex, who is in desperate need of care. Child Services is called, and the last man on earth Carter wants to see walks through the door. Carter had a fling with Donald a year ago and found him as cold as ice since it ended.

Donald (Ice) Ickle has had a hard life he shares with no one, and he’s closed his heart to all. It’s partly to keep himself from getting hurt and partly the way he deals with a job he’s good at be-cause he does what needs to be done without getting emotionally involved. When he meets Carter again, he maintains his usual distance, but Carter gets under his skin, and against his bet-ter judgment,Donald lets Carter guilt him into taking Alex when there isn’t other foster care avail-able. Carter even offers to help care for the boy.

Donald has a past he doesn’t want to discuss with anyone, least of all Carter, who has his own past he’d just as soon keep to himself. But it’s Alex’s secrets that could either pull them together or rip them apart – secrets the boy isn’t able to tell them and yet could be the key to happiness for all of them.

Review: Fire and Ice is the second book in Andrew Grey’s Carlisle Cops series. You don’t need to have read the previous book in the series. I’ve read and listened to Carlisle Cops and Carlisle Deputies completely out of order. And while the characters from previous books pop up and you know that they are together, there is nothing vital mentioned that I found difficult to put together on my own. But that being said, it’s such a great series, it probably would be easier to start from the beginning and work your way through.

This is a great book for anyone that loves a good romance mixed up with a cop drama and includes a heart wrenching story with kids. For me Andrew Grey is an instant read. I connect to his writing style and the great way that he manages to includes kids in many of his books, they are not there for decoration and are a very important character along with the two romantic leads. In fact, I’ve read the book before, loved it and so was super keen to get into the audio book.

The narration of this book was by Randy Fuller. I am not unfamiliar with Fuller’s work. Fuller has performed the narration for Carlisle Cops and Carlisle Deputies, so I have quickly become accustomed to him being “the voice” of the series. His voice has a gravelly timbre that really suits the dangerous and raw emotion aspects of the plot line. I particularly enjoyed his portrayal of emotionally closed-off social worker, Donald Ickle. In addition, he has a very reasonable, well-paced tone in his voice when it comes to portraying level-headed characters, in this book that being Carter Schunk. (It is actually the latter trait that makes Fuller’s narration of The President’s Husband one of my favourite books to re-listen to, but that is not the point of this review).

Carter Schunk loves his work and is dedicated to his job helping the people of Carlisle. He got the reputation of being a whiz with computers and so for the longest time spent most of his time behind the desk, being the man behind the screen and a great asset to the cops on the team. But now he has been able to move behind the desk and hit the streets. One of his first calls is to a domestic violence dispute which ended in the death of a woman. Instinct meant that Carter found scared, dirty and abused little boy call Alex. Carter has an instant connection with the kid and when child services struggles to help the boy due to lack of resources, Carter manages to goad Donald Ickle to help Alex himself.

Donald Ickle has earned the name Ice or Ice-Ickle, and for very good reason. Donald became a social worker so that he could help kids that needed it, much like he had needed help when he had been a child. Taken away from his mother and with no known family, he had lived his life in the system. He’s psychologically scarred and his defence is to push away anyone that wants to get close to him. He and Carter have already had a thing and Carter has already had his feelings hurt, but there is so much going on beneath the surface.

Carter doesn’t give up, not on Alex and definitely not on Donald. It is dangerous that the two men grow close to the little boy, and it is the little boy that brings them together. But this is just a deep and heartfelt plot that sees all three characters undergo a lot of changes throughout the book. These are really well developed characters and the feelings I got from them were intense. For this reason I adored Fire and Ice. Although, add in great chemistry and totally relatable characters and a slow burn romance, I was a very happy person by the end of it. That’s not to say I shed quite a few tears throughout the book.