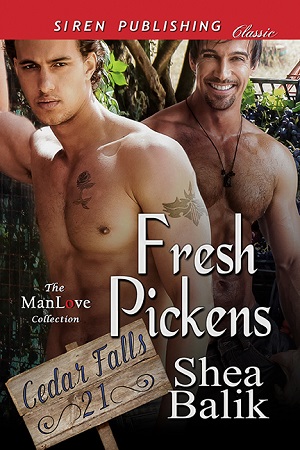 Blurb: Welcome to Cedar Falls, a small North Carolina town nestled amongst the Smokey Mountains. Where the people are friendly and the men are hot.

Several years ago Charles Jackson made a mistake, a big one. He bullied several people for being gay. When his mama found out, she gave him a tongue lashing that still stung years later. Charles had been trying to change since then but the residents of Cedar Falls wouldn’t give him an opportunity to prove it.

Austin Reed hadn’t wanted to give Charles a chance, but the more he got to know Charles, the more he found the man funny, sweet, and nothing like the bigoted bully he had been.

Now, the two must find a way to forgive the past and move into the future if they hope to find their happily ever after.

Review: Each book in the Cedar Falls collection features a new romantic couple. To enjoy the overall story arc and crossover characters, I would recommend reading the series in sequential order.

This wonderful series also has a new branch that just came out. The new series is called Syn’s Playground, so you need to check it out. I came across this wonderful author with the first book in this series, and I knew I was caught. She became one of my favorite authors and also became an automatic buy. Lets face it Jesse was the one that caught me hook, line and sinker.

When Jesse and his friends met up at the casino, the Jackson boys bullied them and then proceeded to get kicked out of the casino. Not too many places for a bully to go, however Charles was a big surprise and he was also in for a surprise. He never really wanted to hurt anyone and now he was trying to make up for it. To his luck it was Jesse that gave him the chance to prove he had changed.

Austin was suppose to give the okay for the new place to go up, he just wasn’t to sure about giving Charles the chance. Then he took the time to get to know him, and things are going to heat up.

I was glad that Charles had changed and was given the chance to prove it. He was a blast to read about and I just absolutely loved him and Austin. The story just kept on giving me what I really needed in a story, and I can not wait till the next book comes out. I love the little surprises and I love how the guys are always willing to help another.

I would definitely recommend not only this book but the whole series. This is one author that you will love to read.