Hi peeps! We have Avon Gale and Piper Vaughn stopping by today with the tour for their new release Goalie Interference, we have a great excerpt and an awesome Q&A, so check out the post and enjoy! ❤️ ~Pixie~ 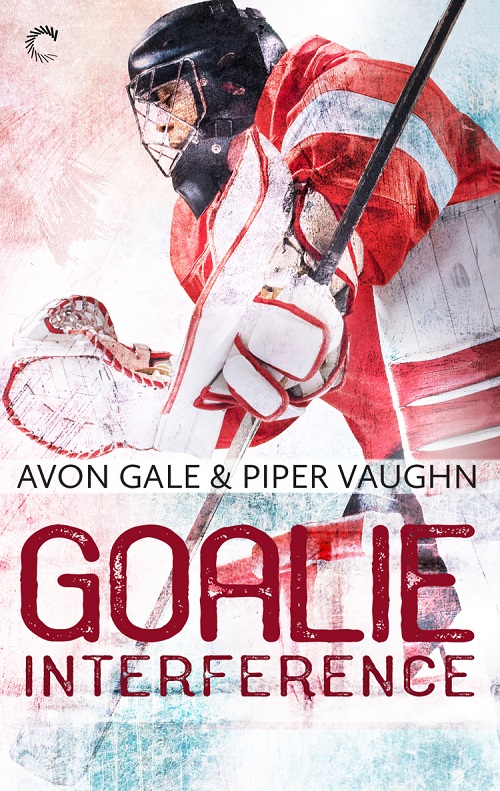 It’s goalie vs. goalie in this brand-new enemies-to-lovers hockey romance from Avon Gale and Piper Vaughn…

Ryu Mori has had a stellar season as goalie for the Atlanta Venom. So when he’s called into management’s office, he’s expecting to hear he’s the new starting goalie for the team, not that some new guy—an incredibly hot, annoyingly bratty rookie—is here to compete for his spot.

Not everyone gets to play in the best league in the world. Emmitt Armstrong knows that, and he’s not about to waste the opportunity after grinding his way from the bottom to the top. If the Venom are looking for a meek, mild-mannered pushover, they’ve got the wrong guy.

Ryu doesn’t want to admit the other goalie’s smart mouth turns him on. Beating Armstrong at practice feels good, sure, but there are other, more fun ways to shut his rival up.

In this league, it’s winner takes all. But there’s more to life than winning, and if Emmitt and Ryu can get past their egos and competitive natures, they might just discover they work better as partners than they ever imagined possible. Name the five biggest distractions from your writing.

-My cat. Look, she’s too cute to resist. She deserves all the pets and treats and love.

What is your ideal writing space?

In a perfect world, I’d have my own office, with a door that locked. There’d be a desk/work station, book shelves stuffed to the brim with paperbacks and knickknacks, a cozy reading nook in the corner for when I needed a break, a few plants near the window, and space to display all of the vintage typewriters I’ve collected over the years.

What do you like to do when you’re not writing?

I love to travel, listen to music (my tastes are eclectic, but at heart, I’m still a 90s grunge and alternative kid), read, and marathon TV shows or true crime podcasts. I also love cross stitching, which I’ve only been doing for about 4 months now, but I’m totally obsessed with the craft and have amassed quite the collection of supplies and patterns and have even started hand-dyeing my own fabric and creating my own designs.

What drew you to this genre?

I’ve been a romance reader pretty much from the start, when I first got my hands on a few Harlequin category romances around the age of eleven. YA was a much smaller genre at the time, and while I was reading some of it—Christopher Pike, LJ Smith, RL Stine, Sweet Valley High, etc.—a lot of it also contained romantic subplots. At the end of the day, I just really enjoy watching two (or more) people form a connection and fall in love, with all the ups and downs that come along with that journey. And given that I grew up around a fair amount of death and violence, I really clung hard to the idea of happily ever afters. I still do.

Name the five biggest distractions from your writing.

Definitely video games. I love them, especially epic RPGs with a huge world map and a thousand pointless sidequests. There’s nothing I love more than fighting with my ragtag group of party members, gallivanting from town to dungeon, rage-quitting boss battles (they cheat!) and putting off saving the world to collect vegetables for that one merchant, or find the lost sheep of a poor villager. I love RPGs because they’re basically found family narratives with a strong emphasis on the power of friendship, which are also things I love to write about in my books.

After that, it’d have to be crafting — I like to knit, embroider, sew, paint, make jewelry, anything like that. I’m always up for learning a new craft (sewing and embroidery are my most recent) and I can spend a lot of time in our local yarn shop, the quilt store with the fabric I won’t let myself buy because I am still not that great at sewing in a straight line, or Michaels looking at embroidery thread.

YouTube — I watch a lot of YouTube videos, as the shorter format works well with my attention span. I love Jenny Nicholson, who has hilarious videos about bad fanfic, movies, and theme parks — I highly recommend her snark-tastic video about that awful “Escape from Tomorrow” movie shot guerilla-style in Disney parks.

My four month old kitten is also a distraction from writing, sometimes a welcome one and sometimes not so much. But it’s hard not to play with her when she’s so cute!!

For the last one, I guess I’d have to say cleaning. Sometimes I have found myself vacuuming instead of writing, in which case I’m sure somewhere my mom is weeping quality for the twelve year old I might have been, haha!

What do you like to do when you’re not writing?

Video games are my biggest hobby at the moment, alongside with crafting (though the kitten makes doing that sort of hard, she likes to pounce on literally everything but especially string/yarn!). I also love to travel, especially road tripping to visit friends or go to concerts. I love to swim, either outside in a nice cold river/lake or at the gym. I obviously love reading, I still love my fandom and shrieking over fanart/fic, and I love watching horror movies. I’m pretty easily entertained, to be honest!

What drew you to this genre?

I’ve been a romance reader since I was about 11, and I started reading gothic romance (“The Lost Duchess of Greyden Castle” was my first!) and then moved on to contemporary and historical. I love character-driven stories, especially ones with a happy ending. Romance has always appealed to my positivity and inherently optimistic nature, and I love being able to write in the genre I’ve read and enjoyed for so long. I especially love seeing queer characters thrive and end up happy, those narratives were ones I didn’t have growing up and I’m committed to making sure they’re out there.

“Can I tell you something and you’ll keep your mouth shut about it?” Emmitt asked. “I’m serious, man. This cannot go beyond you and me.”

“Dude! When do I not keep my mouth shut?” Morley scowled. “Like, when are people gonna get it that I’m like, a good guy?”

Emmitt smiled. “You are. I know. Sorry, it’s just…I might be seeing someone.”

Morley stared at him. “Is it another dentist?”

It took Emmitt a moment to remember how he’d told Morley about his ex, and he laughed despite himself. “No. This time it’s actually a hockey player and…yeah.”

Morley did a fist bump and shouted, “People owe me money, motherfuckers!”

“What?” Emmitt hissed. “This is why you’re not getting any cred! People? Who, people?”

“On the Internet,” Morley said, mysteriously. “Don’t worry. I don’t use my real name.”

Emmitt just stared at him. “I don’t want to know about this. I don’t. I’m not asking. And I can’t tell you who it is, because he’s not out, so don’t ask, okay?”

Emmitt blinked. “What? Where? Why?”

“Enemies to lovers, man. It’s a Thing.” Morley waved a hand. “Don’t worry about it.”

“Okay?” Emmitt gave a helpless laugh. “I don’t know what to even say about that, except I hope those stories end better than my relationship did. It’s not the goalie for the Marauders, by the way. Our archrivals? Give me some credit, dude.”

Avon Gale lives in a liberal Midwestern college town, where she spends her days getting heavily invested in everything from craft projects to video games. She likes road trips by car, rock concerts, thunderstorms, IPAs, Kentucky bourbon and tattoos. As a queer author, Avon is committed to providing happy endings for all and loves to tell stories that focus on found families, strong and open communication, and friendship. She loves writing about quirky people who might not be perfect, but always find a place where they belong.

Avon is represented by Courtney Miller-Callihan at Handspun Literary Agency.

Piper Vaughn is a queer Latinx author and longtime romance reader. Since writing their first love story at age eleven, they’ve known writing in some form was exactly what they wanted to do. A reader to the core, Piper loves nothing more than getting lost in a great book.

Piper grew up in a diverse neighborhood in Chicago and loves putting faces and characters of every ethnicity in their stories, making their fictional worlds as colorful as the real one. Above all, Piper believes there’s no one way to have an HEA, and every person deserves to see themselves reflected on the page.