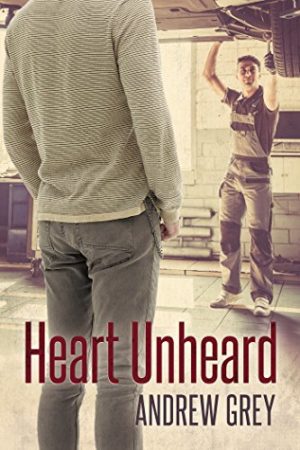 Blurb: The attraction between Brent Berkheimer and Scott Spearman peels the wallpaper, but Brent is Scott’s boss, and they’re both too professional to go beyond flirting. Their priorities realign after Scott is badly injured in an accident that costs him his hearing, and Brent realizes what is truly important… he wants Scott.

Scott pushes Brent away at first, fearing a new romance will just add to his problems, but perhaps he will find unexpected strength and solace in Brent’s support as he struggles to communicate with the world in a new way.

Just as they decide the chance of a happy future together is worth the risk, Scott and Brent discover darker challenges in their way—including evidence that the “accident” Scott suffered may not have been so accidental.

Review: Heart Unheard is a wonderfully written book by Andrew Grey, the second in the Hearts Entwined series. Heart Unheard is everything that I have come to expect from Grey’s books. Each and every one of Grey’s books are a must read for me. This is a slow burn, sweet romance that is totally relatable with characters who are perfectly flawed. One thing that I really love about this series is that one half of the featured couple has some sort of physical disability, once again lending towards my thought that all the heroes are perfectly flawed.

Heart Unheard is about Brent and Scott, Brent is the manager of the garage where he and Scott work. They’ve been attracted to each other for years, however, Brent has worried over the fact that he’s Scott’s boss and that he is older.

All that changes when fate steps in. Scott is injured in a car accident. He is lucky to be alive, getting away with only a brain injury that has caused Scott to become deaf. This brings Brent to his senses and what follows is a wonderful little romance of two ordinary guys dealing with a less than ideal situation. Scott is a survivor and he needs to learn that even though he doesn’t see himself as whole anymore, Brent doesn’t want to lose his chance for a happily ever after.

As I said, this is a sweet romance, there is plenty of emotion and love without the need for melodrama or unnecessary angst. I’m not a fan of books that make a song and dance out of age gaps (to me 10 years or less is not a big deal) and that is just another thing for me to like about this book. My only criticism I have of this book is that sometimes I thought the pace dropped off a little and I found my attention wandering.

I enjoyed getting to see James and Trevor from book 1, Heart Unseen, since Trevor is Brent’s boss (the garage owner). I look forward to the third book in the series, Heart Untouched which is out in October though, from what I saw in the blurb, I’m not sure if there will be any links to Trevor, James, Scott or Brent.