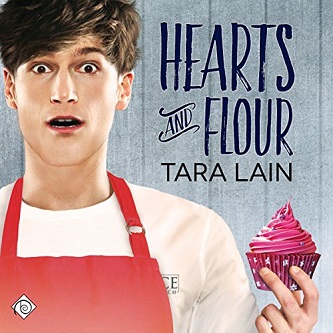 Blurb: Can a raw food enthusiast find love with a guy who bakes cupcakes?

When Micah Truveen’s devoted health-food customers start showing up with white flour, Micah wants to chew nails! To make his misery worse, he finds his yoga teacher boyfriend in bed with another guy the day before Valentine’s Day. Micah decides to drown his misery at a friend’s an-ti-Valentine’s Day orgiastic hookup party – and meets the beautiful Queen, a gorgeous cross-dresser who’s got Southern sugah in his mouth and the right equipment under the dress.

But when the hookup turns serious, Micah has to compromise to protect Queen’s secrets from his beloved grandmother. With everything against them, can two hearts rise above the flour?

Review: Hearts and Flour is a standalone, short story by Tara Lain (under 4 hours so perfect for commuting). I really like Tara Lain and although it is not a part of any series, it has the same Laguna setting as with her series’ Love in Laguna and Balls to the Wall.

The introduces us to Micah. He’s a raw vegan whose passion is running his raw vegan juice bar in Laguna, taking pleasure in helping his customer be healthy and stick to a vegetable-based diet. But life changes when his yoga-instructor boyfriend cheats on him and a cup cake store opens near his, drawing his very healthy customers to indulge in sinful cakes. Things start to turn around when he goes to a friend’s anti-Valentine party, where he meets drag-queen, Queen (? Not sure, Queen doesn’t like labels but feels a certain freedom wearing women’s clothing but identifies as a man). Things go well, really well. Then they meet again, first as Queen but then again as Quentin and either way, Micah is captured.

Quentin moved to California from the South with his elderly grandmother, who is quite spritely despite her age. He thinks they moved because the California climate is easier on the woman who practically raised him. The two have settled into their new home. Quentin and his grandmother have opened their own cupcake store. His grandmother goes to yoga. And despite being closeted, at least to his grandmother, Quentin meets other gay men and feels the instant attraction to Micah.

For obvious reasons, despite the fantastic chemistry, there is a definite stumbling block to this relationship!

The book was narrated by Ry Forest. I had to look it up to realise that I have heard Forest and immensely enjoyed the narration performed for Lain’s Love You So series. Still, that didn’t give me any expectations. However, I really enjoyed the narration of Hearts and Flour. Both characters were given very distinct voices, as a bonus I loved Quentin/Queen’s southern accent. I also loved his portrayal of Quentin’s 80-odd year-old grandmother who is very much a Southern Lady. Excellently done.

If this was a longer story we would be wanting to find out more about Micah and how his deep-seated issues led him to be a raw vegan, but for the length of the book we got the perfect amount of information, even if Micah was a bit of an overbearing drama queen at one stage.

I recommend this one to anyone who wants a quick, simple romance that will warm you. There is no angst, an annoying and manipulative ex and two enjoy sweet MCs who need some love in their lives.