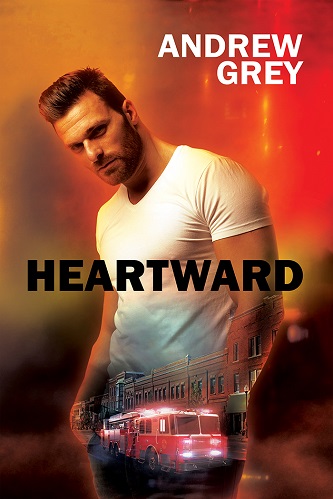 Blurb: He doesn’t know that home is where his heart will be….

Firefighter Tyler Banik has seen his share of adventure while working disaster relief with the Red Cross. But now that he’s adopted Abey, he’s ready to leave the danger behind and put down roots. That means returning to his hometown—where the last thing he anticipates is falling for his high school nemesis.

Alan Pettaprin isn’t the boy he used to be. As a business owner and council member, he’s working hard to improve life in Scottville for everyone. Nobody is more surprised than Alan when Tyler returns, but he’s glad. For him, it’s a chance to set things right. Little does he guess he and Tyler will find the missing pieces of themselves in each other. Old rivalries are left in the ashes, passion burns bright, and the possibility for a future together stretches in front of them….

But not everyone in town is glad to see Tyler return….

Review: Heartward is a standalone by Andrew Grey. I am unashamedly a massive fan of Grey’s books, he has a great knack for writing stories of tough men in uniform, who are really just down to earth, ordinary men, as well as heartfelt stories involving vulnerable children. And luckily for us, Heartward, is a wonderful combination of these.

The story starts out with firefighter Tyler Banik. He’s left his hometown some years ago in his wish to help people, which led him to working disaster relief all over the world. However, things have changed now that Tyler has adopted a traumatised child named Abey. To give Abey stability that he needs and the support that Tyler needs as a single dad, Tyler returns to his hometown where his parents still live. Tyler has got a new job as part of the local crew of firefighters, and while it is a change of pace, he sees a lot that needs fixing – particularly when he comes face to face with an incompetent superior who holds a lot of power.

Then there is Alan Pettapin, he and Tyler were something of enemies in high school, in one of those ways where the rift was caused by assumptions and jealousies in the way that teenagers are so good at doing. However, Alan has changed – for the better – he is a successful business owner, and much like Tyler, wishes to help people. That is how Alan has ended up on the local council, but much like Tyler he knows that there are people in power abusing their privileges.

Between getting to know each other – properly, as adults, finding the actual enemies, and Tyler finding his feet again and pouring his devotion onto Abey, the two men manage to find love as they grow closer.

Abey, the little boy that Tyler adopts is adorable and so completely vulnerable because of the circumstances he had been in before Tyler finds him. His story really tugs at the heart strings and his character also gives Tyler so much depth as he learn their shared backstory. Then there is the part of the plot which deals with corrupt council officials, I really likes this because as a reader we get a real strong indication of the shared moral values held by Tyler and Alan and just how much they care for other people. Finally, there is the personal aspect, which is essentially how Tyler and Alan move from high school enemies meeting as adults to two men falling in love. Each aspect of this story gives great insight and depth to the characters, which just added to the chemistry I felt on the page between the two men.