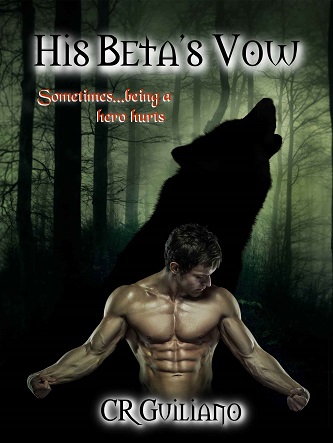 Vann was thrilled for his alpha, Dryden claiming his mate, and now expecting a pup. Thanks to the alpha-beta link between them, the only downside was how much Dryden’s happiness emphasized Vann’s own loneliness.

There was a wolf who caught Vann’s eye, possibly his fated mate, but Vann couldn’t claim a male. It was too engrained in him to seek out a female mate. An alpha female.

Then, the unimaginable happened. Once again, Arri was abducted, and held captive. Except this time, Vann was as much a prisoner as Arri. Day after day, Vann endured Kale’s cruel torture so that Arri would be as safe as possible.

But the pup was coming soon…

…and Vann’s vow as alpha guardian took on a whole new meaning.

Unable to bear the shame, and guilt of his actions, and unwilling to return to Woodlynn to face his alpha, Vann fled, abandoning Dryden now that the male had his mate back safe, and sound.

Dryden was beyond worried that his lead beta, his alpha guardian—his best friend—had disappeared without a trace. Knowing what drove the male to take off didn’t matter to Dryden. Vann had saved his mate, his family. He’d fulfilled his vow, and then some. Dryden was indebted to Vann, and missed the beta desperately, more than he thought possible.

But Vann’s disappearance was only the tip of the iceberg. There was no peace for his family, he was depending on Rovyn more, and more, and yet, couldn’t because the beta had claimed his mate, and needed time with Anrean.

Then there was Border pack, his brother Massey having stepped down, and gone home, leaving Dryden as alpha to both Woodlynn, and Border. Not something that was going over well with the Border wolves. Even Kasp, a psychotic wolf who once belonged to Woodlynn a few years ago was challenging his right to lead Border as the alpha who bested Sbrel.

And to top it all off, Truin, one of his beta-in-trainings, and Vann’s fated mate, had left in search of the missing alpha-guardian, without permission.

His life in chaos, Dryden wasn’t sure what was going to happen. Would he defeat the challengers bent on destroying him? Would he, and Arri ever have time to raise their pup without constant threats?

Would Vann ever return?

Review: The first thing I am going to say is, that the length of the blurb was crazy. After reading it, I pretty much knew what it was totally about. Then there is the problems that the book had with certain words misused and simple errors that should have been caught in beta read.

Vann saves his alpha mate and child, but feels the guilt of what he has done. He runs as fast as he can. His mate, a mate that he didn’t want follows him. Truin follows his mate, without permission and leaves his alpha wondering what the hell is going on.

This story just about drove me nuts. It has the same issues as the first book had. The editor and beta readers should have caught the mistakes, but did not. This story was jumping around so much that I am surprised I didn’t get whiplash. This book fell short on so many levels because it has the same drama as the first book. There were no surprises other than the fact that Vann runs away like a coward. Or I should say like a guilty coward. I am glad that the other beta got his mate, but it still follows the same weak little omega and a strong wolf.

This story had great potential but the author is just not following through. The blurb gave most of it away so I already knew most of what was going on. There was just lots of filler in this book that was not needed. I am sorry but so far I am not impressed with this book nor this series. Let us hope that book three has a bit more shock to it. Also I hope the next book is about the actual characters and there is no cliff hanger at the end. Very disappointed in this one.