Hi guys! We have Sarah Hadley Brooks stopping by today with her release Holding On, we have a great excerpt and a brilliant giveaway so check out the post and enter the giveaway for a chance to a backlist ebook of Sarah’s! <3 ~Pixie~ 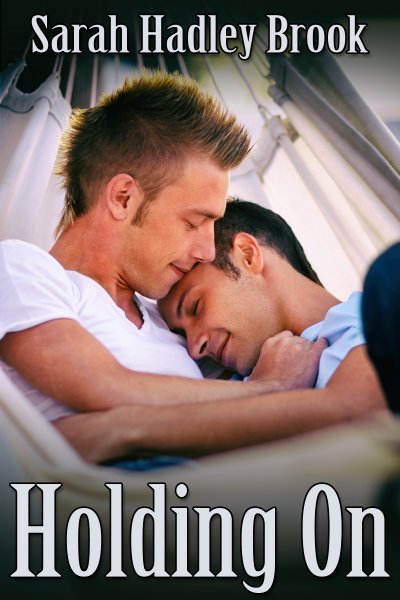 Eighteen-year-old Aaron Pickard is dealing with a lot: he’s falling for his straight best friend, his mother has ended up in the hospital after a violent assault by his father, and he’s trying to decide when to come out. Tack on the stress of an upcoming prom and graduation, a part-time job, and the possibility he could lose his best friend, and he’s an emotional wreck.

Aaron’s best friend Jeff Leaton provides a soft place for him to fall when his life is thrown into chaos, literally holding him each night as they fall asleep. As Jeff helps Aaron navigate through the mess that has become his new normal, Aaron’s feelings for Jeff intensify.

Aaron’s pretty sure it’s all going to end badly, but he’s holding on to hope.

Something was changing between my best friend and me. I wasn’t sure exactly what was going on, but I would often find him staring at me while we were at work. And I was sure he was touching me more often, which I loved. I hadn’t really put a name to it, but I was pretty sure I was falling hard for Jeff. As weird as it seemed, it also felt so natural. I kept reminding myself he was straight and I was inventing things where there were none.

Yet every night when we went to bed, we ended up in the same position: on our sides, my back against his chest, his arm around my waist. Many times I woke up and our fingers were entwined. His warm breath on my neck drove me crazy and there were times I ached to turn in his arms and kiss him. I knew I was playing a dangerous game. I knew it was wrong. I knew he was straight. I knew it all and yet I still fell head over heels for him.

My grandpa was finally able to take some time and we went out looking for cars. It took a couple of days, but we finally found something I liked that I could afford and Grandpa felt was a good, safe car. I admit, I didn’t really know much about cars, so I deferred to him, but I liked my little black 1999 Honda Civic.

As we were hanging out playing video games on Jeff’s PS4 the next afternoon, my phone rang and I didn’t recognize the number. I looked at Jeff and shrugged as I answered.
“Hello?”

“Yes … who is this?” The voice was vaguely familiar but I couldn’t place it.

Jeff was watching me and I mouthed ‘Jon’ to him. It took him a second, but I could tell the second he remembered who Jon was. His lips pressed into a thin, flat line and he paused the game, turning his attention to me.

“I wanted to see if you were coming to Kevin’s birthday party tomorrow night.”

God, in all the drama of the last week I had forgotten about it. “Hang on a sec,” I said and muted my phone.

Jeff was glaring at me. “What the hell does he want?”

I was a little taken aback by the anger in his voice. “He’s just asking if we’re going to Kevin’s party.”

I had assumed he meant us, but maybe he hadn’t. “Are we or not?”

He grunted and I took that as a yes. “Yeah, we’ll be there,” I said after I unclicked mute.

Jeff rolled his eyes and gave me an ‘I told you so’ look. I blushed and turned back to the phone.

Jon and I talked a few more minutes and I told him I would see him there and hung up.

“Let’s get back to the game,” I said as I grabbed my controller.

“He’s got the hots for you,” he replied.

“So?” I looked into his eyes. “Are you saying he shouldn’t? Are you surprised that a cute guy might like me?” I was irked. He was being an ass.

His anger faltered for a moment before he pulled himself together. “That’s not what I was saying. I just … don’t like him.”

“You’re being weird about this. If he wants to ask me out, he can. But he was just asking me about the party. It wasn’t anything like a date. Besides, you said you were in love with someone, remember? I don’t see you calling her and asking her to go with you.”

He paled and looked back at the television screen. “Whatever.”

I won the next three games. 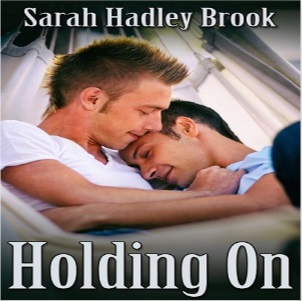 One thought on “Holding On by Sarah Hadley Brook Blog Tour, Excerpt & Giveaway!”