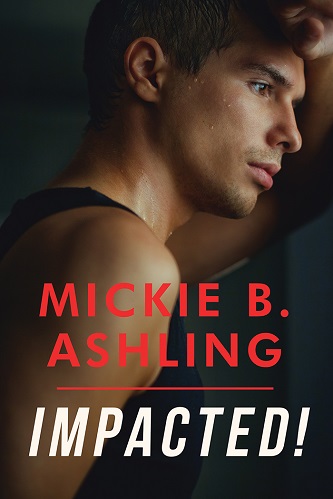 Robin and Scott embark on a journey of exploration into their kinkier sides and discover they’re more than compatible—they’re a perfect match. But keeping employer/employee and Dom/sub separate at the office presents difficulties, and to make matters even more complicated, the owner of the dental practice is an acknowledged homophobe.

They fall in love, but Robin chafes at all the secrecy, refusing to live in the shadows. Scott isn’t as brave; he’s desperate to protect his job and his future. Will they be able to find some middle ground… or will their entire relationship fall apart because of fear?

Review: Impacted! is the first book in Mickie B Ashling’s Bay Area Professionals series. I’m aware of the author, however, I can’t say I ever remembering reading Ashling’s work, so I went into this book blind about anything except the blurb. Being that there is already four books in the series I can see that this could become quite the saga, but I will park those thoughts for now until I get to the rest of the books.

The story is about Scott Gregory, he’s a closeted sub working for a homophobic jerk while at the same time being one of the best dental surgeons around. On vacation, he had an amazing night with a Dom called Red, who understood Scott’s needs as a submissive, but it was only a one night stand. However, everything changes when Scott is back at work and the new dental hygienist ends up being Red, real name Robin Kennedy.

I don’t want to go more into this because while the characters are complicated, much more on blurb and we’d be in major spoiler territory. Scott and Robin are an excellent couple, they have chemistry, baggage and will to make it as a couple, which makes for a compelling story. I found the side story where Scott’s best friend explores her kinks with the support of Scott and Red interesting too, despite the fact I’m not into reading women in sex scenes. So fair warning if you’re like me, but at the same time it is not a lot and everything is done tastefully.