Hi guys! We have V.L. Locey stopping by today with the tour for her new release Improper Fraction, we have a great excerpt, a brilliant giveaway and my review, so check out the post and enter the giveaway! <3 ~Pixie~ 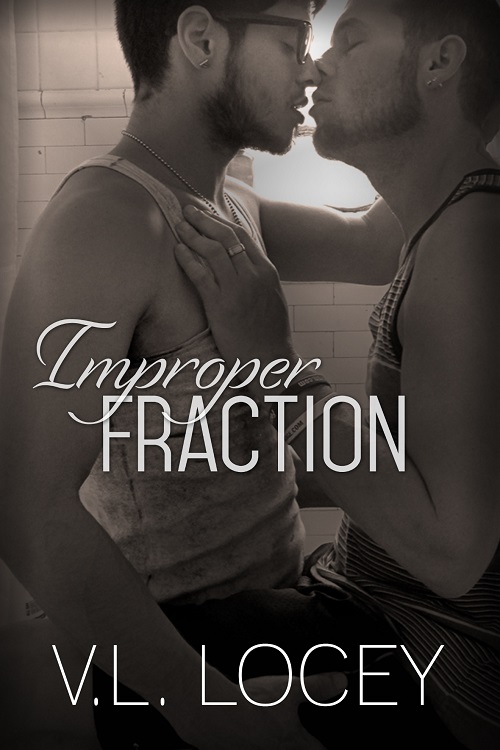 O’Malley Ramsey, math aficionado, grew up next door to Garrison Rook, All-American athlete. While O’Malley dreamed of numbers and kissing Garrison, Garrison’s tastes ran to home runs and hot chicks. During a family celebration the night before both young men were heading off for college, O’Malley joyously discovers that Garrison isn’t quite as straight as the star athlete had been pretending to be. Vows to return to each other quickly followed a few clumsy kisses in the old treehouse in the Rook’s backyard.

Four years later, the two ex-friends meet up at a summer camp where O’Malley is serving as a counselor. Garrison is desperate to make things right with his childhood friend, but can O’Malley, still nursing the pain and mistrust of Garrison’s betrayal, ever forgive or love Garrison again?

There have always been two constants in my life: an admiration for the elegance of numbers, and the adoration of Garrison Rook. Those two things have not always run parallel to each other, but they are large components in what makes the sum of O’Malley Ramsey.

I’ve loved numbers since kindergarten. There are days that it feels as if I’ve loved Garrison just as long, but that’s not true. I met Garrison in first grade so numbers and math have a slight edge. Garrison was everything that I was not – even when we were seven. He was physical, rough-and-tumble, gregarious, admired, and always the first chosen for anything ever done in gym class. His hair and eyes were brown. He was the first person I knew to get a tattoo.

Garrison played sports all the time. Tennis, soccer, and lacrosse but his real love was baseball. And he was good at it. So good a full scholarship to a college way up in Vancouver had been presented to him on his sixteenth birthday. I had been there, at that party with him and his family, when the announcement came. After hearing the news, I snuck off to my next door neighbor’s teal and white powder room. At the age of sixteen, that was probably the biggest difference between Garrison and me. I was sniffling behind a bathroom door about his leaving in two years and he was bouncing off the walls with excitement like a deranged bottle rocket. Of course, if he had known how I felt about him leaving he would have tempered his excitement to make me feel better. That was Garrison and that was a part of why I had loved him so much.

Maybe my infatuation for Garrison began as admiration for his athletic skills and outgoing nature, or maybe it was the way he stood up for those who weren’t as perfect as he was. Or, perhaps, it was just an intermingling of cosmic lines of destiny that had brought two kids to the same first grade class in Willow Glen, South Carolina, fifteen years ago and bound them as friends. Space holds infinite possibilities after all.

That was what I told myself anyway when, upon high school graduation day, Garrison and I were crammed into the treehouse Mr. Rook had built for us back when we had been ten. The fort sat high up in a grand old oak in the Rook’s backyard.

We both had to sit hunched over with our legs tucked into our chests.

“This place was much roomier when we were kids.” Garrison chuckled then handed me a pilfered beer from the six pack he had lifted from the fridge in the garage. Soft laughter from the remaining adults at his graduation party filtered in through the two open windows on either side of the tiny wooden house thirty feet in the air. It had just been a small family affair, as per Garrison’s request. He did have an early flight in the morning after all. My stomach cramped just thinking about it but I hid my dread well.

“Your legs were shorter,” I replied, tapping the top of the can then carefully popping the top. This was my second stolen can. The first had loosened me up considerably. I snorted at the memory of me trying to polka with Garrison’s great aunt.

“What’s so funny?” he asked then took a long sip of the cold beer. I watched as his throat swallowed the beer. Dark stubble covered his sharp jaw and thick neck. My cargo shorts began to feel tight. I tipped my can up to drain it. “Hey, you better slow down, Mal, or you’ll be puking into your shirt pocket again.”

Did that night a year ago always have to come up? I got wrecked one time after seeing Garrison making out with Dee-Dee Delaney at a beach party and have never heard the end of it.

“I’m wearing a tank top and not a dress shirt this time.” I told him then belched loudly.

“So you are.” Garrison snickered, kicked off his sandals, and then crossed his feet at the ankle. His shorts went to his knees but left his meaty calves bare. I wondered how it would feel to run my hands over his legs and feel the dark hairs caress my palms. When a tingle of lust stretched to life in my lower belly like a drowsy cat, I sucked in a deep breath, blew it out, and glanced out the window to my right. “I kind of wish this night would never end.”

That announcement pulled me from the discomfort of a growing erection and the stars that twinkled in the black velvet sky. I stared right at Garrison. His dark eyes met mine. A moth flittered in drawn by the lone flashlight we had carried up here with us.

“I thought you couldn’t wait to get to baseball camp.”

“Yeah, I mean, I’m stoked to get to camp but I won’t be coming back, you know? I’m going to billet with a family up there in Vancouver and play in a summer league until school starts in the fall.” He tipped up the icy cold one and sucked it dry. I did the same. Maybe a better buzz would dull the pain of losing him in the morning.

We both placed our empties aside and opened another. The talk shifted to other things such as days back in elementary school, our summers spent together biking, hiking, swimming, or just hanging out watching cartoons on Nickelodeon. As we reminisced, we sipped beer. One hour slid into two. We laughed over old jokes, old friends, and old loves.

My old love list was pitifully short. It consisted of Darren, a fellow math-a-holic who had lived here for only eight months before his parents split and he moved to Seattle with his mom. Darren and I had never moved past frotting but the summer that spanned my sophomore to junior year cemented who I was in my mind. It became clear to me that there was nothing like the feeling of a flat chest, whiskers, and a strong hand. I embraced my gayness that summer and made it mine.

Now Garrison was another subject. He had been in demand since the day he was registered for kindergarten it seemed. Everyone wanted Garrison Rook, male and female alike. Even when Darren and I were messing around my heart and soul never wavered from Garrison. I knew it, and Darren knew it as well. When Darren moved there had been no gut-wrenching pain like there was now. Nursing my beer, I sat and snickered over some of the ribald things Garrison was letting slip, hoping that if I got a little more beer into me, I’d be able to get through this last night and not breakdown and cry. Win a $10 Amazon Giftcard!
Win an Ebook of Changing Lines!

Blurb: O’Malley Ramsey, math aficionado, grew up next door to Garrison Rook, All-American athlete. While O’Malley dreamed of numbers and kissing Garrison, Garrison’s tastes ran to home runs and hot chicks. During a family celebration the night before both young men were heading off for college, O’Malley joyously discovers that Garrison isn’t quite as straight as the star athlete had been pretending to be. Vows to return to each other quickly followed a few clumsy kisses in the old treehouse in the Rook’s backyard.

Four years later, the two ex-friends meet up at a summer camp where O’Malley is serving as a counselor. Garrison is desperate to make things right with his childhood friend, but can O’Malley, still nursing the pain and mistrust of Garrison’s betrayal, ever forgive or love Garrison again?

Review: O’Malley had a huge crush on his next door neighbour Garrison, just before they both went off to college he thought his dreams came true when Garrison kisses him and promises that they can be together… but Garrison never came back.

Four years on and O’Malley is happy with the way his life is going, he’s serving as a counsellor at a girls Math camp when he’s stunned to see Garrison turn up, a Garrison who wants his forgiveness and a new chance at love.

This is an enjoyable story of two men trying to put the mistakes of the past behind them and starting anew.

I’ll be honest and say first of all that this book ended up not being my cup of tea, while I thought the storyline was good and the last part of the book was great a lot before that either annoyed me or just felt lacklustre.

First off I thought (based on timelines) that O’Malley and Garrison were supposed to be 22yrs old but based on how O’Malley acted in his own mind I’d say he was 16yrs old, Garrison I’ve given a little more leeway as he’s been struggling with his sexuality but his past actions still miffed me off a bit. O’Malley’s lack of empathy for Garrison’s situation really stuck in my craw and I wanted to tell Garrison he was better off looking for someone else.

Garrison is terrified of coming out and it shows in his actions, but I can’t decide if he really was gay like he finally declared or bisexual (he still liked sex with girls), I think that could have been handled better rather than just the final declaration that Garrison made.

I did end up liking both characters and the situation they found themselves in, but the story did seem to get drawn out for longer than it needed to in the middle. There is some excitement involving homophobes that adds a little action to the book and it ends up bringing O’Malley and Garrison fully together and Garrison more out in the open.

I’d recommend this story to those who love friends to lovers coming out stories, tension and conflict, a dash of angst and a very happy ending.