Hi guys! We have K. Childs popping in today with her new release Jeopardy in Tights, we have a great excerpt and a brilliant $10 NineStar GC giveaway so check out the post and enter the giveaway! ❤️ ~Pixie~ 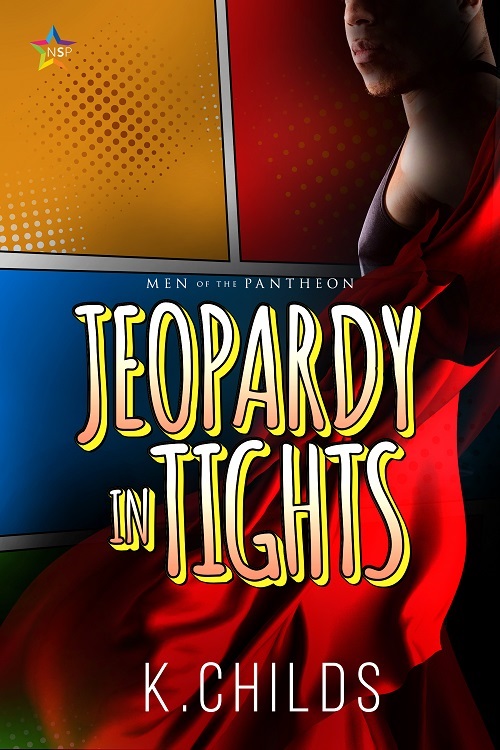 Errol Mason got fired from his last job and put on a blacklist for a good reason. Now, scraping the bottom of the barrel and desperate for any job, he finally lands an interview with Stardust Global.

Errol’s interviewer, company CEO Nathan Parkes, has a secret, one that might get Errol killed. All Nate wants is a meatshield while he goes on a one-man crusade against a bunch of psycho cultists and tries to rescue his missing stepmother. Errol is the meatshield in this equation.

Things start pear-shaped and only get worse from there. Between military small-arms fire, freeway fisticuffs, and escaping the cult’s secret bases, the duo quickly forms a bond of trust and lust.

Warning: references to a past drinking and drug problem (off page) and some on-page violence

Errol Mason stood stark naked in front of about twenty people. His cheap suit, seams torn, had partially melted and unraveled like tissue paper around one of the exposed building support struts. The foyer of Stardust Global was a mess. Standing there nude, in the rubble and debris, he recalled a similar nightmare as a teen.

An hour ago, Errol worried that he’d look shabby for this job interview at Stardust Global. His breath smelled like chicken Cup Noodles—his only diet for weeks now—he needed a haircut, and his shaver had broken halfway down his left cheek, leaving him with a three-week shadow on one side. No water in the apartment, clothing smelling of sweat and mold. Going commando had seemed like a good idea to reduce the smell.

He needed this job.

He was broke: stealing spoons and sugar packets from fast food stores broke. Three months behind on rent broke.

“Did you see that?” Someone took a photo of Errol. Like they’d never seen a naked black man before.

He grabbed what was left of his pants, dusty with soot and partially melted. He didn’t have enough fabric here to cover himself. The scrap fell to pieces in his hands as he pulled out his thin wallet and phone. Wallet singed; old shitty phone, still working.

A lady bravely rushed from the crowd of spectators, holding out a floral yellow towel. Though damp and smelling like women’s body spray, it beat flashing his junk to a bunch of strangers. Errol wrapped the towel around his waist with a “Thanks.”

The obsidian dermis covering Errol’s body dried and cracked as he limped down from the wreckage of concrete and mangled van. His coal-black dermis transformed into flakes, revealing Errol’s dark-brown skin, chilled and covered in gooseflesh from adrenaline.

With the immediate danger over, people began to process, and phones came out. Plenty to see.

Errol hardly took the headline in the destruction of the foyer. That belonged to a skinny bald man in a pair of overalls, slumped over the crumpled hood of the totaled van now supported by a pillar of rubble with a very Errol-shaped hole in it.

The short, unimpressive series of events that had led to Errol’s nakedness were a confusing blur. Errol didn’t sit high on anyone’s list of friends, but he’d done nothing to deserve the lunatic who’d crashed through the glass doors and rammed right into him and the concrete pillars.

Errol had ended up crashing into and through the decorative wall behind the reception desk. The car hit Errol and the support pillar, halting its momentum, and the driver, a skinny bald man, had scrambled out, yelled something about inequality, and sprouted flames from his hands in impressive gouts.

Errol, being rather annoyed from getting hit by cars, picked himself up out of the rubble and marched right through the flame. It burned most of his clothing, but Errol’s dermis, a strange liquid metal coating his body under his clothing, was resistant to most midrange temperatures.

Errol had summarily cracked heads with the madman.

The lunatic now lay sprawled on the hood, dazed and probably concussed.

Errol did not feel the least bit sorry.

His last good shirt was nothing but ruined synthetic fabric rags.

The elevator dinged, and the lobby flooded with more of the well-to-do in their fancy unmelted clothing and uncharred shoes.

He was supposed to be interviewing for a security job. The first interview anyone had given him in eight months.

The man who spoke wore a navy-blue suit and smelled faintly of new leather. He extended a hand for shaking. His nails were neat and manicured, and his palm, when Errol took it, was soft. A man who moisturized. The handshake was limp, gentle. Errol followed the arm up to a face. Smokey-green eyes and thin, pale lips schooled into a polite smile. The gentleman’s soft blond hair swept in a curly wave over one side. Clean-shaven, young; he looked like a model for a men’s fashion magazine.

“Hi.” Errol prided himself on being quick with words. He wasn’t eloquent, but then, he didn’t wear fancy suits or moisturize.

“Nice work taking out the trash.” It was a bit familiar of the gentleman, the way he said it.

“I’m sorry, but I don’t think we’ve met?” Errol would definitely have remembered this guy.

“Nathan Parkes. Stardust Global General Chief Executive.” There was a lot of title in that introduction.

Errol straightened up, clutching his towel. This was the guy who’d emailed him for the job interview. “Oh, hi. I mean, hello.” He looked down. “Sorry, I’m wearing a towel.”

“I asked my assistant to find you something to wear. Least I can do,” Parkes said. “Your résumé says you spent time working for Miltech?”

Errol brushed some of the dermis from his hair, feeling about as self-conscious as one might in a situation like this. “Yeah. I mean, yes. As an armored van escort.”

“And you served in the army during the war?”

Errol nodded. He didn’t like recounting the events or his service during the two-year war and alien invasion that had devastated the planet. He’d spent six months fighting aliens in what had once been Florida. “I was on troop transport.”

“So you’ve been through a few combat experiences? How about de-escalations?” By day, Kristy works as an IT Project Coordinator. She wanted to be a fairy princess when she grew up but sadly discovered the job was no longer on the market. Instead, she embarked on a career to at least write about princesses in castles and grand adventures. She lives in Sydney, Australia, with an abundance of old comics and cute anime figurines.

By night, Kristy is a hippy and foodie, enjoying the life of a city-bred lady and trying all the latest restaurants and foodie crazes she can. She is most at home throwing money around in a handcrafts market, eating gourmet chocolate, discussing the various ramen recipes between restaurants, and browsing second-hand bookstores for undiscovered gems. She is a consummate spinster and lover of animals but has yet to receive a crazy cat lady starter kit.