Hi guys! We have A. Nybo stopping by today with her new release Soul Weave we have a great excerpt so check out the post and enjoy! ❤️ ~Pixie~ 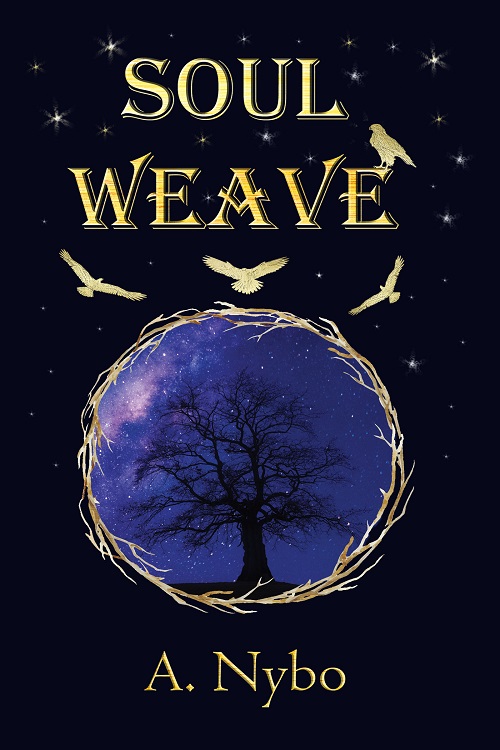 TREACHERY IS afoot among the wizards of Tangia. The wizard king bids his northern champion, Aquilon Tenista, to seek and destroy those responsible for the theft of the wizards’ mindseers. To shield his own mindseer from the thief, Aquilon needs a bag woven of thread spun from his soul in which his can hide. He solicits the aid of Lucien, a clan witch, to weave the bag.

A low-caste widower, Lucien is betrothed to his clan’s war leader. The only way he can delay the arranged marriage long enough to affect his escape is to accept Aquilon’s commission and join his quest.

Watching the enchanting spell weaver interact with the fiber of his soul is pure torment for Aquilon. As the attraction between the two men grow, a sinister presence within the magic cloth begins to emerge. Threads of the enemy’s deception must be severed if they are to have any hope of preventing war and saving their people.

In searching for firewood, his icy feet made walking through the undergrowth painful, but Lucien wasn’t prepared to return to camp for his hide shoes. Stepping gingerly around a prickle bush, he spotted an old gray branch that would burn nicely. As he picked it up, he heard rustling in the undergrowth to his right and quietly straightened to see what caused the noise.

The spark of fear of being confronted by a stranger lessened when he peered into crystalline blue eyes. They sparkled with wisdom and youthful vitality. A charming smile stole across the man’s face.

Lucien covered the feather tattoo on his neck with his hand when he noticed the stranger’s eyes dart to it.

The man appeared to be in his late twenties. His features brimmed with spirit. Tousled black hair hung to broad shoulders, and when he tilted his head slightly, Lucien caught a glimpse of a silver earring.

“I see I have taken you by surprise also.” Straightening, the man peered over the undergrowth and laughed. “It appears we have the same desperate purpose. Is your fire lit yet, sir?”

Lucien managed little more than to snap his mouth closed.

It was dangerous to share a fire with an unknown man. But those eyes…. “Yes.”

“Bring your branch and together we will warm the entire Tabbrela clan territory,” he said humorously.

As the man helped Lucien pick a path through the undergrowth, Lucien snatched glimpses of him. His hide trousers were like any clansman’s, but the floppy-necked green-and-gray-flecked woolen tunic was unlike any other he’d seen.

“Where are you from?” Lucien asked when his branch was taken from him to add to the collection. “You’re not from around here.”

The man tilted his head as he laughed, and his hair fell back to expose the black symbols etched into the thick silver earring. “Am I not dressed appropriately?”

Apparently his assessment hadn’t been quite as covert as he’d intended. Lucien smiled. “That rather depends. For what occasion are you dressing?”

The man’s eyebrows lifted and then lowered in amusement. “I was dressing for the festival to be held between the Jarani and Tabbrela.” Holding his armload of wood away from his body, he looked down at his clothes before turning merry eyes back to Lucien’s. “Do you think I’ve miscalculated?”

“No one will take offense at your attire.” Lucien tried to rid himself of the smile that possessed his lips. “But I think they might wonder who, other than Jarani and Tabbrela, dare come to their festival.”

“Years of experience tell me no bard is turned from a celebration,” he said.

“A bard?” Delight sparked Lucien’s curiosity. “What is your specialty?”

“I play music far better than I tell stories.”

Already Lucien was looking forward to hearing him play. “What instrument?”

Approaching the fire, Lucien tried not to drool at the sight of three rabbits cooking or the warmth the glowing coals promised. The sight of the flames alone was enough to remind him how cold his feet were.

As the bard stoked the fire, Lucien crowded the other side, sitting with his feet almost among the embers.

“Why are you not at the Tabbrela camp?” the bard asked.

Lucien warmed his hands. “Ah, well, that is a story only a bard could do justice to, and I am no bard.”

A wry smile crept to the bard’s lips. “Sir, you have gracious manners, but ‘mind your own business’ would have sufficed.” He feigned a sigh of dejection. “Perhaps I’m not worthy to confide in, but am I worthy enough to share a meal with?”

“Definitely. My name is Lucien.”

His beguiling grin almost persuaded Lucien to relate the woeful tale of his impending life sentence—what others preferred to call “marriage.”

He leveled a cautious gaze at the bard. “Was there something in particular you wanted to know?”

“I do think it a little odd that such a gentle soul is in the sylvans alone when there is warmth, food, and protection at the Tabbrela camp.”

“Being forced to partner their war leader doesn’t sound like protection to me.”

Aquilon’s eyebrows lifted, and he chuckled. “You must be a man of high regard if you find it beneath you to partner a war leader.”

“No, you have the company of a black-feather epicene who would prefer to partner the clan fool should he be the person he loved.” A. Nybo lives in Western Australia. She believes the perfect recipe for reality includes imagining, creating, chocolate and coffee. Amounts and tools for each vary for any given day, but the magic is in the making. Her perfect creative storm is fired by music, travel, nature, and the ever-expanding dimensions of the mind.