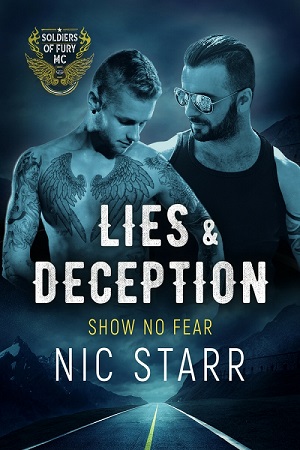 Blurb: Detective Mitch O’Neill is the ideal man to infiltrate the Soldiers of Fury Motorcycle Club. His ex-boyfriend, Peter, is pledged with the club, which provides Mitch with the perfect cover. Despite the relationship ending badly, he’s come to terms with Peter’s drug addiction and his inability to help. All Mitch wants now is to bring down the Soldiers and the club president, Rocky Cummings, once and for all.

Finn Cummings hates everything the motorcycle club stands for, but he’s unable to escape his brother’s clutches. When Mitch is assigned as Finn’s driver, they spend countless hours together, and the saying proves true—opposites do attract. Finn agonizes over his feelings for Mitch—the last thing he wants is to involve himself further with criminals, not when he wants to leave that world. Mitch tries to come to terms with falling for a member of the outlaw club he’s determined to destroy.

If they can survive the fallout from Rocky’s violence and the investigation, they might discover it’s not a case of opposites attract after all.

Review: Undercover detective Mitch has an in with a nasty motorcycle club that they want shut down. His ex was mixed up with the club and is best friends with the club president’s little brother. He just hadn’t expected the brother to be who he was.

Finn loved his father and the brother that died, but Rocky was another subject. The man was a cruel asshat that needed taken out. He was his older brother but he was also as evil as one gets. When Rocky gives Finn a driver, he had not expected Mitch. He also hadn’t expected to be attracted to Mitch. An attraction that could get them killed.

I was at odds end with this story. The characters and plot were well developed and had the perfect amount of depth to it. It was much to slow paced for me to get really into and I admit it was a bit dull also. The romance was more secondary to the actual story which to me was not a good sign. It was stationed in Australia, but it didn’t come off that way at all. There seemed to be one or two words that were reflected there, but the rest of the story didn’t give that vibe. I felt like the blurb gave away the story because before I even started reading I knew who was what and what was going to happen, which didn’t go well.

I did like the murder mystery going on, but there was no real mystery at all. You know who is behind it and why, so no mystery. Then there was the way in to the club which was way easier than any club I heard of. I hate to admit this but the story felt off to me.

I think the idea of a ex-boyfriend who is a druggie keeping his mouth shut about his ex who happens to be a detective, is a bit far fetched. There are not many druggies who would keep their mouths shut. So there were some holes in the story. It did catch my attention but didn’t really keep it like it should have.

It is an enjoyable read but I am afraid that it did nothing for me. However I will hold out till book two on whether I will finish the series or drop it.