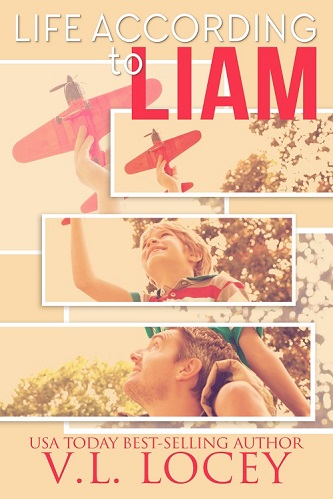 Title: Life According to Liam

Series: According to Liam 01

Blurb: There’s always that chance that your heart’s desire is one click away.

Review: Life According to Liam is a really sweet standalone book by VL Locey. I’ve been loving Locey’s work, particularly since she started writing the world of the Harrisburg Railers and it’s two spin off series with RJ Scott. So a new romance by Locey that includes some ice hockey is always a score for me these days.

As well as being sweet, the other descriptor that comes to mind for the story is charming. The story is pretty much what I expected it to be. The characters are charming and endlessly endearing. Despite MC one being a popular NHL player, he has some great friends that really add to the feel that this is a down to earth character, and totally on the same level as the MC who really is just an ordinary guy, a web designer and blogger. The MCs have some great chemistry but I love how real and relatable they seem as they get to know each other, adding some depth to the romance.

The story opens with Mike Kneller. He’s the web designer and blogger who has a modest following as he writes about his life as a single gay man, helping to raise his nephew with his younger sister and is a massive fan of the Pittsburgh Ravens. Mike was disowned by his family when he came out as gay, a couple years later his then teenage sister, Kelly, turns up needing help because she was disowned for becoming pregnant. Since then, Kelly and Mike’s nephew, Liam, has become his life. They make a beautiful family and Liam is a total joy. The siblings are super close and have a lot of love for each other and Kelly is a bit of a mother hen, towards both her son and her big brother. Mike and Liam also share their love for NHL, in particular the Ravens and their out and proud player, Bryn Mettler. Liam, like all kids, comes out with some quirky one lines, but he loves his Uncle Mike with all his heart and he is part of the reason why this story is just so damn wholesome.

When we meet Bryn Mettler for the first time he is having dinner with his team mates and their wives and/or girlfriends. Being a single gay man, the women in the lives of his team mates want to fix Bryn up with a man so that he isn’t lonely. It’s usual problem of being the only single person in a whole group of couples. It is one of those women that mentions the blog, Life According to Liam, and how the blogger, Mike, is gay and has mentioned that he is attracted to his favourite NHL player. Captured by the blog, Bryn reaches out to Mike, starting a sweet and sometimes rocky journey towards love.