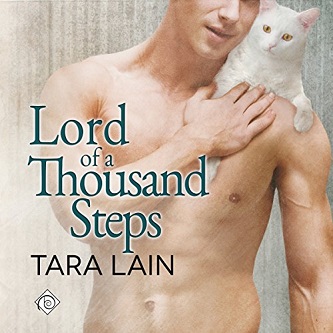 Title: Lord of a Thousand Steps

Blurb: To architecture student Ian Carney, family means everything. Taken in by his brother, Jim, when his father threw him out at 18 for being gay, Ian yearns to create his own family with his boy-friend, Rico. But Rico’s in Mexico caring for a sick father, Ian hasn’t had sex in a month and a half, and his gorgeous boss, Braden Lord, CEO of the architectural firm Ian interns for, is look-ing better and better.

Braden’s life is chaos. Just out of the closet and going through an ugly divorce from his wife of 15 years who’s trying to take custody of his two children, he desperately resolves not to suc-cumb to a completely inappropriate attraction to Ian – even though his kids adore both the man and his crazy cat.

When Rico proves to be a snake in the grass and Ian exercises his powers of seduction, what starts as a friends with benefits fling turns into real life real fast. Can Ian give up his romantic dreams for an old guy who didn’t come out until he carried a mountain of baggage?

Review: Lord of A Thousand Steps is the fourth book in Tara Lain’s Love in Laguna series. This has been a wonderful series to listen to on audio, Lain’s writing translates well to audio narration and the characters are just so relatable. I was looking forward to this book because we’ve already met both characters separately in the previous books. The series revolves around one of the men in the featured couple battling his way out of the closet, while the other is out and proud but needs to support and understand the transition is new man needs so much.

KC Kelly has done a fantastic job performing the narration for this series. He nails the light-hearted moments just as well as he nails the tense moment, with just the right tone and distinct voices for the main characters.

Ian Carney entered this series in book 2, when he showed up on his much older brother Jim’s doorstep with a stray cat he found outside Jim’s place. Ian was about to go to college and be the architect he had always dreamed of being when their father disowned him for being gay. Three years down the track, Ian is living with his brother and his brother’s fiancé and the cat. He has become that architect he has always wanted to be. And the same boyfriend, Rico, he had when he arrived in Laguna is still with him. But when Rico goes to Mexico Ian is understanding and sympathetic of Rico’s situation, with his father potentially dying. Ian is the loyal boyfriend to a fault, even when he feels an attraction to one of his bosses at the firm where he works while attending school.

For Braden Lord, his life is a mess. His professional life is fine, he’s CEO of a major architectural firm. His personal life is a mess. He’s divorcing his wife, trying to keep his kids and she is after everything she can get her grubby hands on, including the company if she can. Braden is ready to not live a lie in the back of the closet. His attraction to the firms intern, Ian, doesn’t help but Braden is far too ethical to allow anything to happen. But fate brings them together, along with Ian’s cat and Braden’s kids, who both love Ian as well. If not for the conspiring ex-wife, their lives seem to just click together as the romance slowly builds once Ian can allow himself to give his heart to another after Rico.

I have to admit that this is probably my least favourite book in the series. I simply found Ian’s situation was vastly more complicated than called for. While there was no cheating or anything, the timeline made the plot feel rather compressed and I didn’t feel the development of the characters quite like I did in the other books until about halfway through this one. The story also employs one plot device that I feel is bit bland – the old evil ex, for both men, the lying rat ex-boyfriend and the bitch ex-wife who doesn’t want her kids so much as she wants revenge. Still, how Lain has written this in works fine and actually adds a little more drama into the overall plot.

Nonetheless, this is an enjoyable book and those that have been following the series will likely appreciate Ian getting his own story, I know I did.