Hi guys! We have Jenn Polish popping in today with her new release Lost Boy, Found Boy, we have a great excerpt and a brilliant giveaway so check out the post and enter the giveaway! ❤ ~Pixie~ 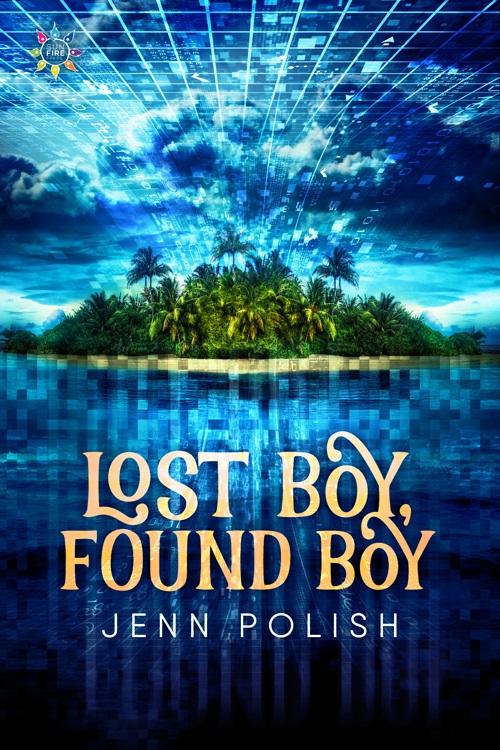 In a futuristic world, Neverland is a holomatrix, Hook is a cyborg, and Tinker Bell is an automated computer interface.

Peter is desperate to save his lover from a military draft that, unbeknownst to him, Mir volunteered for because they are desperate to be able to fly. So, naturally, Peter programs an entire island—Neverland—as a refuge where Mir can fly without having to fight in a war.

But he doesn’t locate Mir right away; instead, he fights for control of the island with automated interface Tinker Bell, and in his attempts to find Mir, others arrive on the island. But Peter’s single-minded focus on Mir generates repercussions for everyone.

The boys knew they slept in pods because it was cheaper than having the oxygen on all night throughout the home.

But there was a rumor, too.

A rumor the pods were programmed to choose them. One at a time.

The younger boys believed it with wide-eyed fear and obedience.

The older boys believed it with solemn remembrance and, sometimes, defiant irreverence.

Peter was a middling boy. Mir was middling, too, and placed with the boys.

The ship’s emblem was burned into the tender flesh of their forearm. They’d been chosen.

They grimaced and closed their eyes, allowing a solitary tear to drop, to sizzle on the still too-hot burgundy disruption in their otherwise-smooth golden-brown skin.

“Peter.” They frowned. Their oldest friend was a light sleeper. They pressed the comm button inside their pod again, making sure it glowed its signature azure, letting them know their voice was, in fact, being transmitted from their pod to Peter’s.

“Peter.” Louder this time, more insistent. Their attention didn’t move from Peter’s face. They wanted to see, just one last time, what the boy looked like when he woke, free of the worry lines that already plagued his face during his more alert moments. Mir wanted to, needed to memorize the way Peter’s crisp green eyes opened sleepily, the way they blinked out of a dreamland and into life. The way they flashed with all the magic of the stars of old the moment his gaze landed on Mir’s face; the way they only sparkled like that for them, the way Mir always made Peter’s mouth tug up into a sleepy, a happy, a blissful smile.

Mir wanted, needed, to record all this, make sure they never, ever forgot the uninhibited joy they and they alone could pull from the boy’s eyes.

Because once Peter saw the bloodied emblem on their forearm—and worse, when he found out why it was there—Mir knew his eyes would never light up like that again. Not for them, anyway.

Sure enough, Mir’s whisper-shout roused the boy this time. He jumped, the artery in his neck leaping with him, pulsing like it was trying to pull his body into flight.

Peter turned on his pillow toward Mir, peering out at them through the untinted glass of his pod. Finding Mir’s eyes waiting, watching him intently, Peter smiled. First in his eyes, with that sparkle that made Mir’s eyes water, that made Mir’s core swoop and their heart bellyflop; then in his lips, the left side first, then the right. He fumbled with sleepy fingers for his comm button.

“What’re you awake for, beautiful? Don’t you know there’s a war on? Sleeping in conserves oxygen reserves,” he quoted blearily, mockingly. Lovingly. He was whispering, even though Mir knew none of the boys could hear them—their comm signals only routed to each other’s pods. Peter had programmed them just for that purpose himself. Still Mir glanced around furtively at the other six pods in the windowless room. They were all tinted to near full darkness, but they imagined the other children’s sleeping forms tucked inside them nonetheless. Oblivious to them, and oblivious to Peter.

Mir didn’t answer, their throat one massive, painful lump. They just stared at Peter, stared at the boy who’d held their hand when they took their first step outside, the boy whose never-ending determination to make play out of even the most mundane tasks made him quite desired amongst all of their friends. They tried to open their mouth, but they nearly choked on their own saliva. Their forearm had long-since stopped burning—they hadn’t even felt the pod marking them, choosing them as they slept, but it stung now—and as they took in Peter’s eyes, they became acutely aware of each new striation in their skin, of the slight swelling surrounding the ship’s emblem that would take them away from Peter forever.

Mir’s eyes just got wider, and Peter squinted across the room at them, watching them swallow. Wishing there were no pods—no air at all, for that matter—between them.

Wordless and shaking, Mir lifted their forearm, rotating their palm so Peter could see the tender underflesh where the choosing had left its mark.

A combination of disbelief and terror settled into Peter’s features, his rounded cheeks and angled chin, his wide eyes and his very, very pink lips. His head shook back and forth like he had a hinge loose in his neck, and his hands haltingly lifted to the glass of his pod, his palms pressing, pressing, trying to traverse the spaces between them.

“I’ve been called to the war, Peter. The Hub needs pilots.” They paused. Peter was still shaking his head in shock, tears steadily streaking down his otherwise still, unblinking face.

No point in beating around the subject now. Best do it while he can’t say anything, anyway, Mir figured. They took a deep breath.

“The Hub needs pilots, and Peter…Peter, this isn’t a random choosing. This wasn’t the draft. I submitted my number for priority consideration last rotation. Right after my sixteenth birthday. I don’t want to fight in any war, Peter, but I need to fly. I need to fly, and the only way I can is if I serve the Hub for a few rotations. I need you to understand.” Mir’s voice broke, and they curled down into their blankets. “I need you to not hate me.”

Neither child knew how long the silence stretched between them, but neither child moved and neither child dared to even breathe too loudly, though Mir shuddered a couple of times.

Even through their shudders, Mir didn’t look up, not once in all their silence; they didn’t shift from their almost bowed position, like one of those ancient carvings of servants before royalty.

“Peter.” The sound was ragged, full of gravel and full of grief. Mir lifted their gaze to look into Peter’s, now, but Peter was staring down at his interior pod controls. He punched in a few numbers before looking up and smiling, the forcedness, the fakeness sending shivers down Mir’s spine. But at least his voice sounded more like his own, with that musical quality, that earthy ebullience underneath it, holding it up.

“And then when you’re done, you can come back and I can program you the fanciest ship to ever enter Hub space.” Mir tried not to flinch away from the vacant flicker in Peter’s eyes, even as he just kept smiling that fake, twisted smile, punching away at his pod’s keypad.

But Peter was gone, the communications cut. Peter had overridden his pod’s safety protocols and popped open the top, despite the surrounding air being devoid of oxygen.

Peter didn’t offer so much as a backward glance to Mir, who just stared, helpless. Who just pounded lightly, open-palmed, on their own pod door, unable to override the safety protocols without help from Peter. Trapped and mandated to sleep until the podroom was oxygenated again at artificial sunrise. Jenn Polish is the author of two young adult books, Lunav and Lost Boy, Found Boy. Their debut novella, Lost Boy, Found Boy, is a scifi re-telling of Peter Pan in which Neverland is a holomatrix, Hook is a bisexual cyborg, and Tink is an asexual lesbian computer interface. Their debut novel, Lunav, a lesbian faerie tale, features dragons that grow on trees and friendship amongst rebellion. They teach Theater and English in the CUNY system, where they are also a doctoral candidate in English. They live in New York with their fiancée and their fantasies of having multiple puppies.