Hi peeps! We have L.A. Bryce stopping by today with the tour for her new release Love, Trust & Secrets, we have a great excerpt and a fantastic giveaway. So check out the post and enter that giveaway!  ❤ ~Pixie~ p.s. keep an eye out for our review coming soon! 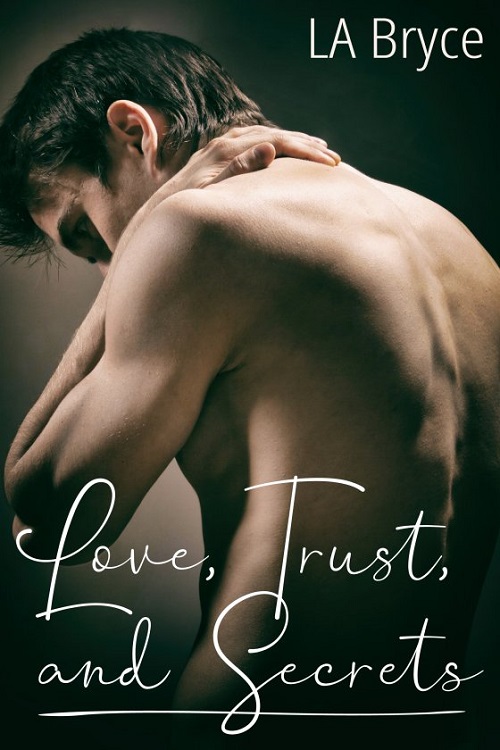 Even though a bad situation brings Tyler and Jarod together, they quickly find the good in their relationship. But when Tyler falls in love and finds the feelings returned, he’s forced to question if his and Jarod’s relationship is worth risking his freedom, his life, and their hearts.

Jarod knows Tyler is hiding something, but his fear of scaring Tyler away has him accepting Tyler’s silence. But instead of keeping Tyler close, Jarod’s avoidance ultimately leads to Tyler being taken away, leaving Jarod clueless and unable to help the man he loves.

Love, Trust, and Secrets is a story whose main focus is the love between two men and all the trial and tribulations that come with that love. He stayed in the shower as long as he could stand. The chilly water invigorated him and made him feel halfway human. After he finished, he got dressed, stepped to his bed, moved the covers, and picked up the phone he’d forgotten at home the night before. It wasn’t a big deal since he didn’t have anyone to call.

He was about to type in his work number when his finger stopped midway to the screen. A message blared in his face. He’d missed five calls. “What the fuck?” He didn’t even know five people who he could have missed.

When he saw they were all from work, his heart stopped. Why would they’ve called him five times? Unless something’s wrong. Very wrong. But that couldn’t be. He’d called the restaurant the night before. He’d needed to get out and had hoped he could make a little money while working off some of the nervous energy flowing through him.

Tyler listened to the first, second, and third messages. Confused, he played the fourth and fifth. They didn’t make sense. His boss had called him five different times, twice on one day and three times on another, trying to get him to come into work. It would’ve been a great gag if his boss had a funny bone, or if he ever laughed. Something was messed up.

Tyler turned on his little transistor radio to find out what day it was. The phone had to be wrong and his boss hallucinating. Tyler was sure the news station would know. The answer came at the same time Tyler’s legs gave out, and he fell on his ass.

“How the fuck did I lose two days?” Holding his knees bent with his head folded down on them, Tyler rocked his body back and forth. “What the hell? If they’d found me, I wouldn’t be here.” What could have happened? Regardless of how many times he asked the question, he didn’t have the answer. When he finally got it, he knew what he had to do. Where he had to go.

But first, he needed to call work and check if he still had a job. He paced the room as he dialed the phone. His breathing ragged, he took deep breaths trying to calm himself as he waited for his boss to answer. Both calls transferred to voice mail. He left a message, praying he’d hear back and the news was positive.

How could he have fucked up so badly? It was time for him to find out.

He picked up the cab closer than he should have, but right then, speed preempted stealth. He paid little attention to his surroundings, his focus on getting to where he needed to be.

At his destination, he hopped out, stomped up the path, and rang the bell. He bounced on his toes as he waited.

The door opened, a man smiled, and Tyler punched him in the face.

Tyler got two hits in before he realized the other man wasn’t fighting back. Instead, the guy stood there for a moment taking what Tyler gave. Then without warning, the guy grabbed onto Tyler, holding him in a tight bear hug.

“Calm down. Not going to let you go until you stop trying to hit me. And my name is Jarod in case you forgot.” Tyler kicked out, and tried to free his arms from the hold as the other man spoke.

“I don’t give a shit who you are. Let me go.” Tyler’s words were stuttered, his breathing too heavy.

Jarod tightened his grip. “Calm down. Stop swinging, and we can talk.”

“Okay. Then just stop swinging at me, and we can go in the house and talk.” Jarod’s voice was too relaxed for the interaction.

It caused Tyler to become more incensed. “Fuck that. I’m not coming in your house. Why? So you can get me drunk again?” Tyler continued to try to break out of the man’s hold. One hand pulled loose, and he used it to hit the guy in the face again.

Barely hearing the words over the pounding in his ears, Tyler froze. If Jarod hadn’t been holding Tyler, he would have fallen down.

I’ve been telling stories for as long as I can remember; my parents tell me it’s been going on even further back than that and not always at the appropriate times. Now I choose to use my gift for good.

I enjoy meeting new people, even if they’re only in my head.

I believe love comes in all different packages and each should be wrapped in a ribbon and cherished.

I’m currently working on a contemporary romance with a splash of suspense. I get a thrill coming up with unexpected and usually dangerous situations for my characters to be in and then thinking of extraordinary ways for them to escape with outcomes that deviate from the expected.

I live with my family in the Northeast where we enjoy white winters, balmy summers, a spring flurried with fragrant flowers, and a fall filled with piles of leaves to dive in to. Our small town offers the old world charm of knowing your neighbor and its location enables us to take off for dinner in a city known for its beautiful skyline or to an afternoon playing in the sand of some of the best beaches found in the United States.

For me, writing is relaxation for the soul and reading is its nourishment.