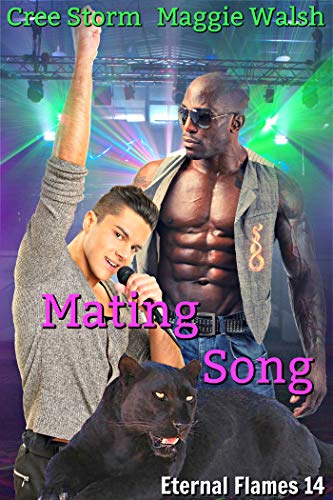 Blurb: This is the fourteenth book of the Eternal Flames series which will now be read at mixed with Eternal Flames Maddox series, you should read those series in order. The reading order can be found on our websites…….maggiewalshauthor.weebly.com and creestorm.weebly.com. This book may have some triggers for people with PTSD, Music had always soothed Deja and helped him through troubling times. So when he meets his mate, Shadow, and sees how his close proximity is hurting him, Deja takes a job he had only dreamed could be possible.

Shadow should be thrilled that his mate has gone off to live in Maddox, but yearns to claim what fate has brought into his life. However, living as long as he has, seeing and experiencing all the ugly life has to offer, he knows he is no good for the sexy man. When it’s opening night and Deja is attacked, things change.

Can Shadow keep his mate at arm’s length, unclaimed, and safe from those that would be out to hurt him?

Review: Each book in the Eternal Flame collection features a new romantic couple. To enjoy the overall story arc and crossover characters, I would recommend reading the series in sequential order. This series is connected to Eternal Flames: Maddox and the Kaliss series.

Shadow has spent most of his time in the military, not only the present one either. For over a hundred years or more, he has served in one place or another. He had been almost killed by his father when he was found with another man, then the ones who took him in told him it was time for him to leave. He had been abandoned so many times he lost count. His soul was darkened by what he had done even if it was for the good guys. Then he found a new family in a goup of men he served with until someone set out to kill them. So when he finds his mate, he does the one thing to protect his heart, he runs.

Deja was two years old when a band of gypsies found him and took him in. His brothers might not be of blood but they were still his brothers. One of his brothers was injured and he just wanted to help him, so he did what he was good at, he sang to him. Then he saw a man staring at him, and somehow knew this man was his. You see Shadow is a panther shifter and Deja is human, or so he thinks. Poor guy is in for more shocks real soon.

Someone is out to get Deja and you know what a fierce panther can do to prey, just wait and see. We don’t really see these two together much in the book till later on, and somehow the authors just work it right. This is one of those books that will be read more than once or even a dozen times. It captivated me from the get go and lets just say I have just finished reading it for the second time. It doesn’t really pull at me as some of the others in this series does, but it still gives me an excellent read. It gave me everything I could ask for in a story such as excitement, action, danger and some hot sexy times.

I absolutely loved this book and can not wait to get my hands on the next story. I would definitely recommend this book as well as the ones that are connected to it. Trust me you will fall in love with them as I did.