Shea Balik has a new MM paranormal dystopian romance out in eBook and audio formats:

Siberian Tiger shifter, Aleksi Rykov, is amused to watch the enemy chasing one of their own, psy, Seth Tilton, until he realizes it’s his mate. Rescuing his mate isn’t difficult for the powerful Alpha but keeping his mate safe from the war raging between their races may be more difficult.

Seth is taking a chance running to the one man he knows can keep him safe, Aleksi. Seth knows the psy’s secrets and the psy will do anything to get him back but with Aleksi’s help Seth can help turn the tide of the war and uncover the horrible truth. The question is will Aleksi be willing to help the enemy?

Both sides are against their mating and doing their best to tear the two apart but Aleksi and Seth are determined to stay together against all odds. Can Aleksi and Seth manage to find happiness by mating the enemy? 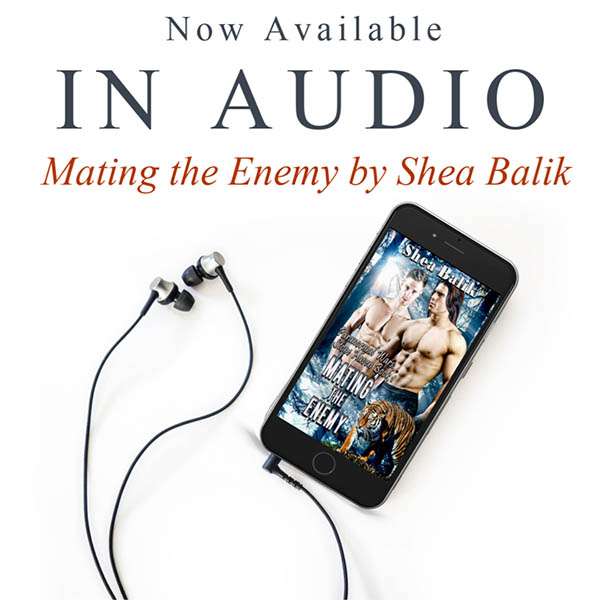 Shea is giving away a $20 Amazon gift card with this tour – enter via Rafflecopter: With a jerk of his head he silently told his second-in-command and enforcer to leave them alone. He knew they wouldn’t completely leave but they would give them some space. Alek was sure Seth would be embarrassed once the Psy realized he was seeking comfort in his arms.

Sure enough, after a few more minutes, Alek felt Seth’s body stiffen as he pulled away so fast, he almost fell on his ass. Not that Alek would have let that happen, but Seth seemed to be even more embarrassed at his clumsiness.

An adorable blush stained his mate’s face, which Alek was wise enough not to mention. Needing to reassure his mate, Alek reached out once more to Seth, but the man stepped back too quickly. A low growl from deep in his chest rumbled out.

The shocked look in Seth’s eyes tinged with fear pissed Alek’s tiger off. He’d already told the man he was safe. Then to see his mate back away from him set his tiger to pacing in anger. Who was he kidding? It wasn’t just his tiger that was ticked.

A steady sound of growls continued to come from Alek with each step Seth took.

“I di–didn’t mean to…” Seth audibly swallowed as his eyes darted around.

Alek didn’t know if he was looking for help or a way to escape, nor did he care. He stalked his mate, his strides much longer than the Psy’s.

When he stood just a hair’s breadth away, Seth said, “I didn’t mean to touch you. Please, I promise not to do it again.”

Alek felt like he’d been sucker punched as he stood there not sure what to say. Part of him was furious Seth could even say he’d never touch Alek again. But more importantly he felt the overwhelming need to prove to his mate just how wrong he was.

Before Seth knew what was happening Alek reached out and pulled Seth against him once again. He heard Seth gasp but before he could say anything, Alek’s mouth captured his, demanding entrance.

As Seth’s lips parted, Alek didn’t waste any time plunging his tongue deep within the recesses of his mouth, making sure the Psy understood who he belonged to. When he heard Seth’s moan of surrender, Alek’s beast nearly purred.

Heaven. This had to be what heaven was. Seth’s taste flooded his senses as he delved into each nook and cranny of his mate’s sweet mouth. Sweeping his tongue along Seth’s bottom lip he slowly pulled away but not letting more than an inch or two separate them, keeping his arms firmly locked around his mate.

“You are mine.” Alek nearly winced at how rough his voice sounded stating that. “And while I would never force you to touch me, I would be greatly disappointed if you didn’t.”

The dazed, confused look on Seth’s face had Alek smiling in pride. He didn’t know how he needed this man so quickly, but Alek wasn’t about to give him up now. Bestselling author of the Cedar Falls Series, Miracle Series, and Paranormal Wars Series, Shea Balik has always had a vivid imagination with stories running around in her head. Often her stories are taken from observations of other people with her own spin. Traveling is one of her favorite ways of fulfilling her passion of people watching. You never know, one day you may spark her imagination for her next book.

Whether at home or traveling she is usually in front of her computer writing or curled up with a good book. Find Shea at any of the links below!