Hi guys! We have Quin Perin popping in today with their new release Obsessed 3, we have a great excerpt and a brilliant $10 Amazon GC giveaway so check out the post ans enter the giveaway!❤ ~Pixie~ 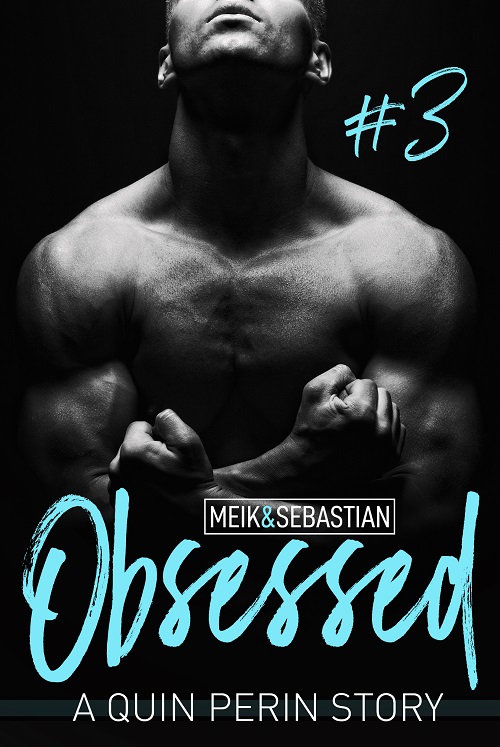 It was supposed to be the perfect arrangement.

Easy sex in exchange for a cozy bed. Until Meik’s darkest secret scratches the surface, forcing him to cut Sebastian lose in a last-ditch attempt to regain his sanity.

But he’s not the only one with secrets.

All along, the enigmatic musician had something to hide. Will Meik manage to tear himself free or will his obsession and memories batter him into submission?

For a moment their eyes bored into each other. Sebastian looked as angry as Meik felt. His eyes were on fire, cheeks flushed red. Those full pink lips trembled with fury. They were in a standoff, imprisoned by the electricity shooting between them.

Sebastian made the first move.

The palms of his hands slammed against Meik’s shoulders, his shove doing nothing to the solidly built blond. “What the fuck do you think you’re doing?” Sebastian hissed at him. “I was in the middle of something.”

Meik pressed harder against Sebastian’s shoulder. “What? Whoring yourself out to more people?” he spat, voice vibrating with possessive rage. “Do you tell all of them you’re a fucking virgin too?”

Confusion replaced anger and Sebastian looked up at him. “The fuck are you talking about?” he countered, lips twisting into a disgusted grimace.

Shooting his hand up, Meik pressed his fingers into Sebastian’s jaw. “I saw your criminal record.” When Sebastian attempted to turn his head to the side, Meik forced his attention up, yanking his head back and digging his fingers into his jaw. He held his eyes with furious intensity even as he thumped Sebastian’s head against the bricks. “Vagrancy and shoplifting, I expected. But prostitution? You were trying to fucking play me! That whole virgin shtick was fucking clever. It’s been a long time since someone pulled the wool over my eyes.”

“Oh, fuck you. I’m not a fucking liar.” Sebastian’s fingers moved to wrap around Meik’s wrist, slipping underneath the sleeve of his jacket and digging his nails into his skin. “You’re here trying to act all high-and-mighty, but you’re the one who paid for a blow job. You have no right to fucking judge me.”

Before he thought it through, Meik’s hand slapped a red handprint across Sebastian’s cheek. His head turned from the force of it, eyes closing tightly, a whimper falling from his lips.

Sebastian shook his head as much as he could given the position he was in. “You’re unbelievable! You don’t care about me. You don’t even ask for my fucking last name. You don’t ask me anything about myself. You don’t ask me…anything. You order me about and fuck me. And then you’re surprised when there’s shit about me you don’t know? Surprise, surprise!”

He made a good point, but it only stoked the fires of Meik’s rage. He inhaled deeply to stifle his overheating emotions; it didn’t help. Meik’s hands moved, fingers twisting in the collar of Sebastian’s jacket. Lifting him off of the wall, Meik forced him back against it, pinning him with all of his weight. “You lied! So why would what you say matter? You’d lie some more!” He was on the edge of shouting, his voice echoing off the tall walls of the alleyway. Hello there! This is Quin&Perin. We are a pair of sultry gay erotica writers who focus on detailed, toe-curling, and realistic smut scenes with a fair share of dirty talking (Oh, boy). Unlike other authors in the genre, we write without the goal of publishing anything. Publishing is just the cherry on top of a cream-covered bubble butt.

That said, it is time for the next level of smut: stories featuring fire, lust & desire.