Hi peeps! We have Audra North stopping by today with the tour for her new release Midlife Crisis, we have a great excerpt and a fantastic giveaway, so check out the post and leave a comment to enter the giveaway! <3 ~Pixie~ 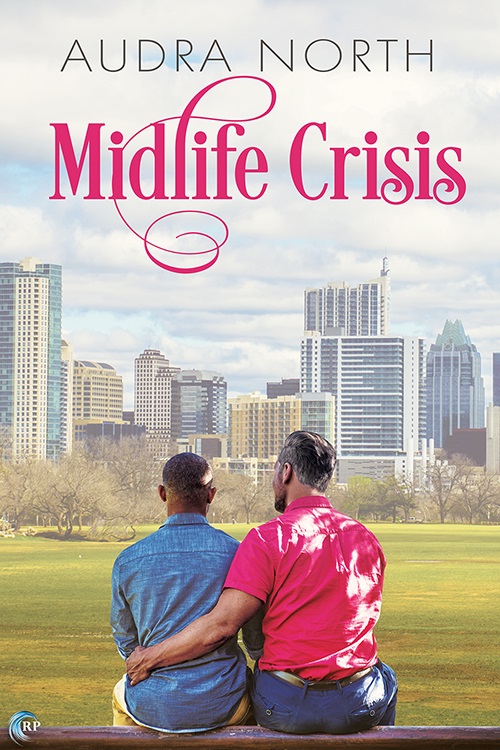 Cam McGhee grew up like any other small-town Texas farm boy: he played football, went to church every Sunday, and married his high school sweetheart. But thirty-five years after he said “I do,” Cam finds himself nursing a beer in a gay bar, thinking about what might have been.

Dave Montoya is confident, self-assured, and cautiously single. But when he meets shy, uncertain, and clearly-still-not-out Cam in a coffee shop in Austin, his reservations about getting seriously involved again disappear. Cam is everything he’s looking for in a partner . . . almost, anyway.

No matter how much Dave wants him, and how good they are together, Cam can’t bring himself to openly embrace the life he was meant to live. After all, when his secret finally gets out, he faces the very real possibility of losing everything that kept him going for the first fifty years of his life, just like he’s feared for so long. But with a little faith—and a lot of love—his dream of living fully, truly, as himself might finally be within reach.

At the front end of the bar, Cam McGhee sat huddled over a bottle of Shiner, trying to ignore his discomfort.

Perhaps some part of his subconscious was trying to make sure everyone else in here knew he didn’t belong. Maybe that was why he’d chosen to sit in the one place that meant braving the blast of chilly air that blew in every time someone walked through the front door. Or why he was scratching at the corner of the label of his beer bottle instead of sipping highballs like the other men in the bar.

Then again, he hadn’t worked up the nerve to take his eyes off the longneck to check if anyone was so much as looking in his general direction, so how would he know for sure?

As it was, Cam’s behavior on this—his first time in a gay bar—was remarkably similar to how he acted at Rex’s place back home. Nothing remarkable, much less worth even a passing glance.

Which was why it surprised him when a slender blond in a pair of tight rocker jeans and a sheer white T-shirt sidled up to him on the neighboring stool.

“Hey there.” The stranger’s voice was neither high nor low—unlike Cam’s gravelly baritone—and, at first, Cam thought he was a kid. The guy was dressed like he wasn’t more than Elijah’s age, anyway. But when Cam turned his head to look more closely, the overhead lighting flickered for a moment over a web of fine lines around blue eyes, a slight droop along the blond’s jawline. Cam guessed the man was in his midthirties. Still twenty years younger than Cam, but not knee-jerk-recoil young.

“Hi,” Cam managed to reply, lifting his bottle and tipping it slightly toward his new neighbor. The corner of the label curled down, the paper half-pulled from the glass, which made him frown. Next to this slick-haired, sparkling man-boy, the ravaged label looked out of place. Hell, he looked out of place. He’d known that already, but for the first time since he’d walked in, it dawned on him that he stood out much more than he’d initially believed. No one else was wearing anything even remotely similar to navy-blue Dickies and a long-sleeved chambray button-down. There were a few other African-American men, several others with graying hair, but despite his ability to find those similarities in the crowd, he knew he didn’t blend in.

“I’m Alex,” the blond said, leaning slightly toward Cam for a moment before drawing back. A not-quite shoulder bump.

Was that supposed to be in lieu of a handshake? Cam wasn’t sure. Everything felt impossibly foreign to him.

But Alex didn’t seem to notice, or maybe he simply didn’t care, since he grinned and followed up with a sly look and slight smoothing of his voice when he asked, “Are you new in town? I’ve never seen you in here before.”

Cam nodded. “Been here a week.”

Alex laughed, which confused Cam, because he didn’t think he’d said anything particularly funny. Maybe this was flirting. What would he know about it, anyway? He’d never really flirted with anyone. Not even his wife.

“I like your accent. Where you from?” Alex looked at Cam curiously over the rim of his glass as he took a sip. Alex had slim wrists. Slim, but still masculine, the sharp bones and stark veins covered with fine gold hairs that meandered up the back of his hand. The sleek, edgy look hadn’t been doing much for Cam, but those wrists sure did.

He made a small sound and shrugged. “Nowhere near here.” Last week he’d made the five-hour drive from Bitter, a rural, predominantly black farming town of six thousand people, to this crowded, bustling city, the bed of his truck packed with two serviceable suitcases and an assortment of power tools.

But he didn’t feel like sharing that. Bitter was too small a place to go telling everyone in the wider world that he was from there.

“Texas, though, right?” Alex didn’t seem to mind Cam’s reticence, and Cam found himself increasingly grateful that someone else was dogged determined enough to carry this one through. Maybe he’d get what he came for tonight, after all.

“I always had a thing for country boys,” Alex told him, and Cam nearly choked on the swig of beer he was taking. Alex grinned as though he knew he was saying disconcerting things—and liked it. “What brings you to Austin?”

Cam plunked the bottle back down on the bar. “Taking a vacation.” He thought about stopping his reply, but figured he’d been taciturn enough already. He didn’t want to drive Alex away. It wasn’t likely to get much easier than this. “I’m here for a few months, taking a sabbatical of sorts.”

Alex’s eyebrows went up. “Are you a professor or something?”

Cam laughed at that. Hardly. “Nah. Just been working too hard for too long. I needed a break.” That was true, though not really the reason for getting away from Bitter. “What do you do?”

“I’m in finance.” Alex sat up straighter, and Cam assumed this meant that his job was something to be proud of. “I do investments, a lot of private portfolios, that kind of thing.”

Alex nodded. “It is. The first ten years were intense but lucrative. Now it’s just as exciting, but I don’t have to bust my ass eighty hours a week anymore. That’s for the junior-level schmucks.” His chuckle was nasty and off-putting, but there was something oddly sexy about the way his hair glinted in the bar lights. He was a pretty, if slightly tarnished, white boy.

Cam decided to focus on that.

Arousal hit hard, nearly making Cam grunt with the unexpected force of it. “Something different, I guess. Exploring.”

“I’m up for something different too,” Alex purred. Even in the low light, it was impossible to mistake the greedy hunger in his eyes in response to Cam’s words, and Cam immediately wished he could take them back. Alex wasn’t his type; he already knew that without going any further. But it had already taken so much to come this far tonight, and he had a goal.

He wanted his first kiss with another man to be over and done with.

Speaking of . . . Alex was already leaning forward, his lips coming together, coming toward Cam’s.

Cam jerked back with a slight shake of his head. “Not here.”

Over and done with didn’t mean public.

Yes. No. I don’t know. He steeled himself against the surge of doubt that threatened to knock him over. “Yeah. Let’s go.”

His stomach clenched, feeling unnaturally full of nothing. He took one last swig of his beer, trying to stuff the discomfort out of himself, pushed cash toward the bartender, and followed Alex toward the exit.

Outside the bar, it was shockingly quiet. Alex turned to Cam, slid a hand up his arm, and squeezed the muscle with a murmur of appreciation. “My place?”

Alex didn’t miss a beat, though. “I live just a couple blocks over.” He pointed downtown toward Second Street. “Are you parked nearby? You can bring your car to my garage if you want.”

Cam shook his head. “I’m in the lot over on Eighth. It’s not much farther. No need to drive over.” He blinked. Given the confusion knocking his brain around, it was strange to find that words were actually coming out of his mouth in some reasonable facsimile of conversation.

One more arm squeeze and Alex jerked his head toward the direction he’d pointed earlier and started walking. The clip-clop of their shoes was the only sound between them as they covered the block.

“Do you always wear cowboy boots?” Walking side by side in the streetlamp-lit low light, Cam couldn’t see Alex’s face, but it sounded like he was laughing, and Cam found himself smiling back. The weird cramp in his gut was slowly dissipating as he walked, and by the time they reached the crosswalk, he was feeling more in control.

He told himself that going home with Alex was a good thing. It was a good plan. They’d . . . well, they’d probably do a bit more than kissing, but that was okay. Being able to say he’d done it would go a long way toward settling the deeper unrest he’d been experiencing since LaVerne passed.

The WALK sign lit up. “I only wear them on Sundays and when I go out somewhere nice,” he admitted as they crossed the street. “Most of the time it’s steel-toed Carhartts.”

On the opposite corner, Alex stopped and turned to stare at Cam. “Wait. You’re telling me . . . Are those your churchshoes?”

Cam shifted back and forth on the shoes in question. “I guess you could call them that.”

Alex let out a hoot and shook his head. “Definitely something different.”

Before Cam could think of a response, Alex was moving forward again, flipping a sultry look over his shoulder at Cam. “Come on, cowboy. Let’s go exploring.”

Audra North is a contemporary romance author of more than twenty romances, including the Stanton Family series, the Hard Driving series, and the Pushing the Boundaries series. She is the owner and publisher of Pink Kayak Press, which focuses on the publication of diverse romance works. Winter Rain, a Pink Kayak Press anthology, won a gold medal in the 2015 Independent Publisher Awards.

Audra enjoys speaking to writing groups and at industry conferences. She is also an avid jogger and loves running marathons. She has three children and lives with her family outside of Boston.

For more about Audra, and to sign up for her newsletter, visit audranorth.com. To celebrate the release of Midlife Crisis, one lucky winner will receive a $25 Amazon gift card!