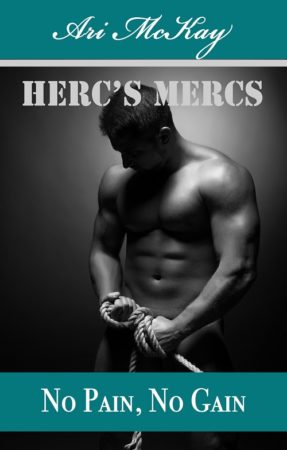 Title: No Pain No Gain

Blurb: Hunter Callahan loved being a merc. As an explosives expert for Lawson & Greer, he’s dealt with everything from IEDs to rogue nukes. But when a suicide bomber in the form of a seven-year-old boy walks into camp, Hunter learns there are some fates far worse than death.

Payne Gibson recognizes the “thousand yard stare” of the PTSD Hunter refuses to acknowledge, and as a natural caretaker, he can’t resist when his boss, Cade “Hercules” Thornton, asks him to help. Hunter is resistant until their surveillance assignment turns dangerous, and Hunter realizes he’s in danger of losing his career, the only thing in his life that matters to him anymore.

Their relationship as Dom and sub deepens more than either of them expected. Payne knows adding emotions into the mix is dangerous, but he can’t help it when Hunter is both the man and the sub Payne has hoped to find. But Hunter doesn’t feel he deserves love, not when his best friend is dead because of him, leaving behind a wife and child to mourn — and to blame Hunter for their loss.

Payne can help Hunter to stare into the abyss… but what stares back might be more intense than either of them can handle.

Review: Each book in the Herc’s Mercs collection features a new romantic couple. To enjoy the overall story arc and crossover characters, I would recommend reading the series in sequential order.

Hunter and Mark were what one would call the best of what they were, merc’s. They would go in and take a bomb apart. That was not the only thing they did but you get the picture. They were best friends and as close as brothers as one could be. Things were looking up for them all, that is until Mark died protecting Hunter and a small child. It destroyed Hunter and made him want to give up. The only thing that kept him from doing so was his promise to his best friend. Now he would not be allowed back into the field, unless his bosses changed their mind. He was given a baby sitter that was a big surprise.

Payne was not only a member of the team but he had some degree’s in him that helped others around him. He had once been a field medic who also helped the mental side of things. Now he sits around watching. So when Cade called him and asked him for his help, he jumped at the chance. Not only was this guy going to be a challenge, but he was attracted to him as well. It would seem that  therapy was not going to work for Hunter, but Payne knew what might.

Most times when one comes across books like this it is usually the client that the body guards fall for, and I was quite surprised and pleased that it was a unique type of story. It is not the usual danger and death brings them together, but PTSD. I could never imagine what one would go thru like Hunter had. I could see where he was going and the pain that would be caused from seeing his best friends wife and godson. He felt guilty but also angry. The author told the story with the perfect tone to it.

Now I did notice some grammar mistakes in this book but it didn’t screw the story up like most do. It was just missing words and the sort, just enough for me to notice but then again I was looking for them.

Now you got to know Hunter but Payne was a bit of a mystery. You have a fully developed character like Hunter, but Payne was not as well developed as he should have been. However once again, it doesn’t take away from the story at all. You felt Hunter’s pain and fell in love with him. It just took a bit longer to get to know Payne but once you’re getting into it, he just seems to hit you all at once.

It felt like the read was just a bit longer and it was a bit harder to actually get into. It is a very emotional type of story. So make sure you have your tissues ready.

I did enjoy it quite a bit and can’t wait to get my hands on the next book.