Hi guys we have Blue Jones stopping by today with her new release Northwest of Normal, we have a great excerpt and a brilliant $10 NineStar GC giveaway so check out the post and enter he giveaway! ❤ ~Pixie~ 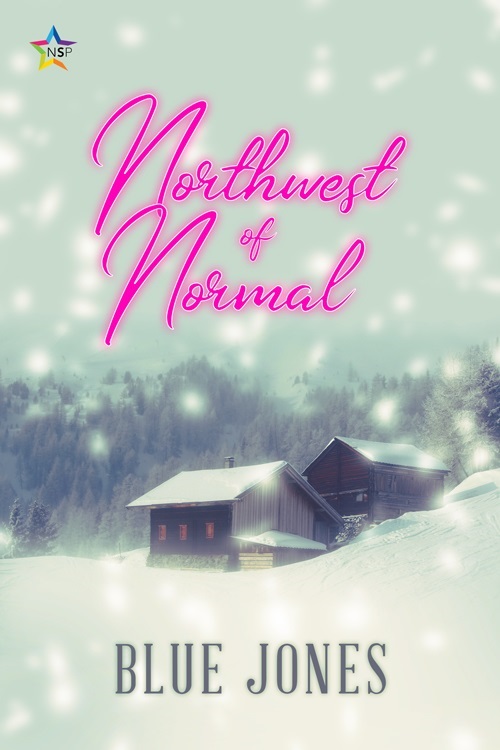 When Ben wakes up from a nap in his Jeep, he is horrified to find two strangers driving it. His car’s been stolen, with him in the back seat. Ben overhears just enough to discover they are brothers on the run for murder. Randall is a thug, delighting in showing off his gun and vowing to use it if Ben tries to escape.

Ben just wants to get out of this alive but soon finds himself fighting a dangerous attraction to Randall’s younger brother Murphy. His tough exterior hides someone sweet, vulnerable, and completely gorgeous. The sexual tension between Ben and Murphy becomes impossible to ignore as they are kept in forced proximity. Bound together, made to share a room and even a bed night after night in increasingly weird motels, they slowly turn from enemies to secret lovers. When Murphy discovers Randall’s true plans for Ben, he must choose between the brother who has always been his everything, and Ben—the man it might be worth losing everything for.

Ben woke up facedown in the backseat of his car, one cheek pressed hard against the warm leather seat and a hand hanging down to the bristled mat on the floor. He yawned into his sleeve. He’d driven for hours yesterday and was still exhausted. The last thing he remembered was parking up at the roadside late last night and pulling a blanket and coat over himself for warmth. He’d only intended to take a quick nap, but judging from the bright light, he must have slept until late morning. His groggy mind started to clear, and he turned over onto his back, pushed his coat away from his face, and stretched out.

He gazed up lazily at the roof of the car as a shadow passed over it. Then another. He pushed the coat down farther and squinted at the opposite window. Trees rushed by. It was only then that he noticed the steady purr of the engine and the vibration of the car beneath him. The car was moving. Someone had stolen his Jeep. With him in it.

He was suddenly very awake. He smelled cigarette smoke and stale beer and heard someone breathing in the driver’s seat by his head. As he edged slightly to his right, he saw a stocky man with short hair and a dirty, green shirt sitting on the passenger’s side. Ben slowly lay back down and kept his breathing quiet, even though he felt like his heart was beating out of his chest. For one surreal moment, he wasn’t quite sure what to do. They were the ones who had stolen his car, but it felt somehow impolite to interrupt them.

What was he supposed to say? Should he shout at them to get the hell out? Or should he tell them they could keep the car and politely ask them to let him go? He breathed in through his nose and out through his mouth and listened as the man in the passenger seat spoke.

“You chose a decent car, kid. Full tank of gas.”

Ben jolted. For a second, Ben thought the man was talking to him. The guy looked about forty and had a southern accent, local to where they were in Georgia. He leaned forward in his seat as he spoke, like he had a surfeit of energy coiled up.

Ben only had that one word to go on, but the man driving sounded younger and calmer, with a softer voice.

There was a long moment of silence before the younger man driving spoke again. “Why’d you have to do it?”

“I did it for you, and you know it,” said the older man sharply.

“Don’t give me that,” said the driver, sounding defensive.

“I told you one day I’d end up killin’ him. Just a matter of time.”

“Never thought you meant it.”

Jesus Christ. Forget confronting them. Ben would curl back up under the blanket and hide. Perhaps he could slip out unseen next time they stopped for gas or food or to kill their next victim. He was about to duck down under his coat when the passenger looked in the rearview mirror—his shocked gaze meeting Ben’s.

The driver followed his partner’s gaze and whipped around, shouting in surprise. The passenger reached out one meaty hand to grab the blanket off Ben and grip his wrist tight. His ruddy cheeks contrasted sharply with his pale, wrinkled forehead and the puffy bags under his eyes.

“Nice work, little brother,” the older one mocked loudly. “The one time I let you drive, you pick an occupied car.”

“If this isn’t the dumbest shit you’ve ever pulled.” Randall threw his hands up in exasperation.

“I said shut up. You didn’t notice him either.”

The car slowed and pulled to the right.

“What’re you doing?” Randall let go of Ben and reached out, jerking the steering wheel back toward his brother so the car stayed on course.

“Pullin’ over to get rid of this guy.”

“No way, Murphy. I’m not havin’ him run off to the cops. He’s seen my face. Anyway”—Randall turned in his seat and winked at Ben but continued to talk about him as though he weren’t there—“never look a gift horse in the mouth. We can use him.”

“What the hell for?” Murphy gave Ben a worried glance in the mirror before turning his attention back to the road.

“Why do I always go along with your stupid, dumbass plans?” Murphy muttered.

“Because you love me.” Randall stared at Ben. “What’s your name, kid?”

Ben licked his lips and sat up, pushing the coat off himself and freeing his legs from the blanket. “Benedict…Ben.” He tried hard not to let his voice tremble.

Had he really done that? If the man was lying and they’d broken into the car, he surely would have been woken by the noise. Maybe he was just that stupid and had left the car unlocked all night. Ben slid to the middle of the backseat where he could see them both—the driver in profile and Randall, who was still staring at Ben. A male voice with an English accent spoke, and all three men jumped.

“Make a left turn at your earliest convenience.”

“Shit, sorry. That’s my GPS. It’s sort of temperamental. Never makes any sense. I don’t even use it,” Ben rambled.

“Switch the fucker off, brother.”

Murphy scrabbled with the buttons with one hand, and it spoke again.

Murphy gave up on the buttons and yanked out a wire. The device bleeped, and its red light went out.

Randall turned sideways in his seat and stared at Ben once more, a smile transforming half his face into deep crow’s feet. He scratched at the light gray stubble covering his chin and jaw.

Ben pulled it from his jeans pocket and handed it over.

“Where’s your money at?”

“Uh.” Ben couldn’t think straight. He patted all his pockets and then remembered. “Oh, my wallet’s in the glove compartment.”

Randall yanked it open and went through everything. He rifled through Ben’s collection of napkins and ketchup packets from fast-food restaurants, his bug spray, and mini bottles of hand sanitizer and finally found Ben’s black leather wallet. Ben sighed as he remembered he’d taken out five hundred dollars in cash before he’d set off. More than enough for food, gas, and motel rooms all along his route.

Randall opened the wallet and whistled. “We hit the payload.” Blue Jones is a British author who writes sweet and sexy romance, full of offbeat characters and happy endings.

Her books have been published by Dreamspinner Press, NineStar Press, and various UK & US literary journals. When she’s not writing or painting, she loves Twin Peaks, Daniel Clowes comics, and watching Call Me By Your Name on repeat.