Hi guys. we have S.A. Collins popping in today with his new release My Summer of Love, we have a great excerpt and a brilliant $10 NineStar GC giveaway so check out the post and enter the giveaway! ❤ ~Pixie~ 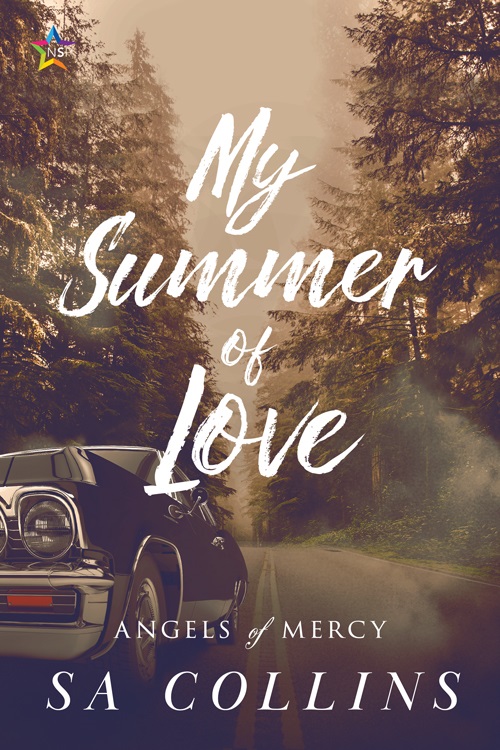 My Summer of Love

On the cusp of his senior year at Mercy High, Elliot Donahey, an out but terminally shy gay young man who keeps to the shadows—never wanting to be seen or noticed—suddenly finds himself in the arms of the highest profile jock on campus, local star quarterback, Marco Sforza. Their lives, and the ones of those closest to them, will never be the same.

Set against the backdrop of competitive sports, this character study work deep dives into the lives of these young men who each must “play the game” so Marco can play the game he loves. They are just trying to find some small slice of happiness to call their own amidst their hellish final year of high school.

My day at the Q went pretty much like any other day. I prepped the machines to churn out the requisite soft ice cream Dairy Queen was known for—a pale mixture not too unlike frozen liquid paper (and probably contained quite a few of the same ingredients, come to think of it)—a heart-stopping coagulation of fats and chemicals. That broad assertion of its core ingredients was made by my mother, Kayla Donahey. As a bona fide health nut, she had the irony of owning the local DQ franchise she’d inherited when her father dropped dead—in the store, in front of customers no less—only two short summers ago. Coincidentally, and much to my chagrin, the very same year I was able to legally work. You can just imagine my euphoric bliss. This was how one Elliot Donahey entered the workforce: a by-product of a family franchise transfer. Sometimes I marveled at how my grandfather had timed things so precisely to check out of life so everything could change hands with nary a wrinkle in the process.

That fateful hot summer day, Taylor Campbell, a wiry six-foot three tall man, was the sole employee manning the store. As with most people, he had no way of knowing that day would be his last. At the time, he was sixty-three years, four months, twenty-two hours and thirteen minutes old (I did the math later—hey, I was bored), and was busy running the local shop he’d had for the past thirty years—working on probably his two millionth Oreo Cookie Blizzard, never realizing it was his number that was up.

At exactly 4:57 pm he dropped dead on the job. The only reason anyone knew the exact time of death was because, as the aneurysm burst in his head and his body took its death plunge to the floor, his right arm caught the electrical cord of the store clock, yanking it out of the wall and thereby fixing the time of death for all to see. By six that evening a distraught and frantic Kayla, with a disheveled and confused me in tow, had the store operating while she tried to coordinate calls to the family advising them of the change in ownership and what time the funeral services were going to be held. Meanwhile, she left me alone to do battle with the obtuse workings of the fryer.

I would’ve thought she’d have closed the store due to a death in the family. But you’d have to know my mother, practical to a fault. And she was worried about money—so the store stayed open. She said she’d grieve later, in private, alone in her room. I tried to comfort her. She told me she was going to be all right but needed some time alone to process it. It was a very lonely night for us both.

Other than the steady decline of customers due to the recent downturn in the economy, not much had changed in the two years since my familial indentured employment began. I was now on the cusp of turning eighteen on the second day of August. You know, that momentous occasion in a boy’s life where I was supposed to blossom into manhood. Where I—I dunno, like sprout hair on my chest, grow a huge cock, and want to bang a gaggle of women—or something like that. Sadly, since it was only Tuesday, July 17th, I still had a couple of weeks before I could claim the status of being a pseudo-adult American male. I couldn’t legally drink, not that I had a hankering to do so, but like all red-blooded American males, I was working on it.

This particular Tuesday, though, seemed like any other. In fact, since we’d taken over the Q, all of my days stretched out before me like the blank white walls of the shop. It was just one boring set of non-events meandering into another. I had no way of knowing how this particular day’s events would drastically change my life forever.

For today was the day I would fall in love.

I’d like to say, looking back on it later, the air smelled different, the sun was a bit brighter, and I was greeted by deer and birds on my walk to work, but no—no change. Same ol’ boring Mercy day. I’d always imagined what it’d be like to have a special someone in my life. There’d no doubt be challenges ahead for us: the thrill of the chase, the incredible emotional highs and hopefully, very few lows. But for now, I refilled condiment containers, had buns queued up, and stocked the requisite food supplies for another thrilling adventure-filled day at the Q…

…then proceeded to wait four hours for my first customer.

Sometimes, I wondered why my mother even bothered sending me to the shop. There was a Baskin-Robbins only a few doors down the same strip mall practically stealing all the ice cream business. And, honestly, who really wanted a grilled cheese from the Q anymore?

Even though my taste in food often ran contrary to Mom’s overly crazed health-conscious experiments with our home meals, I often dreamed of settling down to a basic meal of steak/protein of some sort, potatoes (because I have a particular affinity for them), and a veggie or salad (because rabbit food is good food—or so they tell me). Hey, it wasn’t like I was demanding a gourmet feast straight from Tyler Florence’s recipe box, but I didn’t fancy having to compete with the local rabbit or avian population in foraging for my next meal. I just wanted real food, not the corporate-processed shit I was forced to serve up to our barely existent customers.

On most days, there was nothing to pass the time other than a continuous round of stocking and cleaning. True enough, I could play my favorite XM radio station in the store—not like anyone else was around to protest my taste in music. Way I figured it, if I was working for nearly free (Mom did give me some money so it wasn’t legally slavery), then at least I could listen to whatever the hell I wanted. Musically, I was all over the map. Country (especially the new “sexy” gay country singer Steve Grand who’d recently gone viral on the inter-web thing, as Mom calls it) to show tunes (I swear this will become clearer to you in a moment) to classic rock or even disco (okay, that one might’ve been a dead giveaway). I did it all.

I even liked to play coffee house fave Jay Brannan cranked up and do my own little fake video shoots in the store. I mean, who needs High School Musical or Glee when you could have me bouncing around from table to table in the seating area wailing at the top of my lungs to Jay Brannan’s song “La La La”? Haven’t heard it? Well, Google it, dammit—do I need to bring you up to date on everything?

See what I mean? Broadway’d only be so lucky! And you certainly ain’t lived until you’ve walked in the Q and watch me pour a mean Blizzard while hearing Tchaikovsky’s Piano Concerto No. 2 gushing forth over the fairly adequate sound system. Right now, though, it was Donna Summer extolling the virtues of working hard for the money. My disco mood was running rampant. SA “Baz” Collins hails from the San Francisco Bay Area where he lives with his husband, and a Somali cat named Zorro. A classically trained singer/actor (under a different name), Baz knows a good yarn when he sees it.