Hi guys! We have Rebecca Cohen popping in today with the tour for her new release Not All Chocolate and Cuckoo Clocks, we have a brilliant guest post from Rebecca, a great new excerpt, a fantastic giveaway and my review so check out the post and enter the giveaway! <3 ~Pixie~ 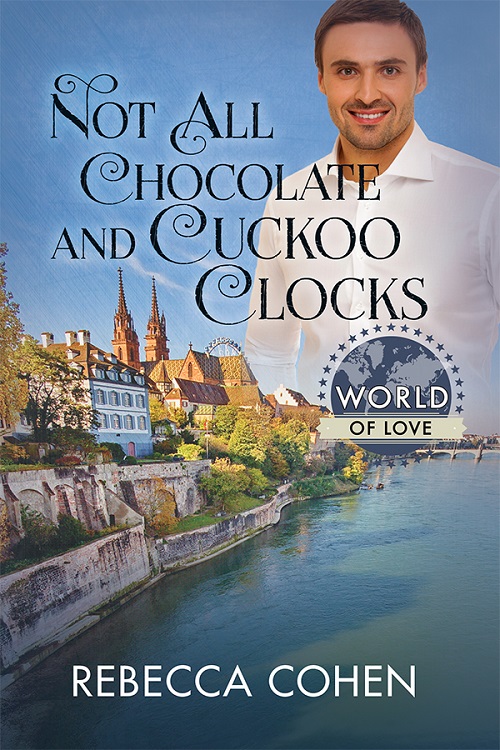 Not All Chocolates & Cuckoo Clocks

Neither of them wants to fall in love, but getting exactly what they don’t want might be the best thing to ever happen to them.

My new novella is based in Basel Switzerland, which is also the city I live in. When we first moved to Basel there were many things we weren’t sure of. For instance, the Swiss are thought of as very conservative people and we did wonder if we would fit in with our left leaning views on life. Having lived here a while, we’ve learnt Basel is a different beast: nearly a third of inhabitants aren’t Swiss, there’s a couple of big international companies based here, and Basel, in general, votes liberally… this is not necessarily the same for the rest of the country.

But since we’re talking about Basel I thought I’d share a couple of things that surprised me. In Switzerland, civil partnerships are allowed but marriage isn’t here yet. Also, rightly or wrongly, I thought the Swiss would be prudish, so putting those things together, I was very pleased to see this poster (part of series of all types of couples) promoting safe sex, and no one blinking an eye or defacing it because there are two men. I was also surprised to find that prostitution was legal and regulated (and therefore the earnings of Swiss citizens are taxed). EU citizens can apply for work permits which are issued for 90 days, but you have to have health insurance! Activities have to happen in licensed premises and street walking is not allowed unless in specific areas. I learnt all this when I found the tolerance zones in Basel where the sex workers mustn’t encroach out of when looking for business… the bright green woman leaning against a lamppost wasn’t hard to miss.

~~~~
Enter the rafflecopter draw or leave a comment below telling me about things that surprised you about where you’ve lived or place you’ve visited, and be entered into the blog tour giveaway for your choice of an ebook of one of my backlist titles (excluding Crofton Chronicle bundle). “I’ve hardly gone Swiss. I’ll be back for good before you know it.”

She narrowed her eyes. “Is that the problem? You don’t want to come back?”

His little sister was as shrewd as she was clever, and being in possession of a double first from Oxford meant she was not lacking in brains. “I dunno. I didn’t think I’d like it out there as much as I do.”

“Not like you to get attached to somewhere so quickly. Took you ages to settle when you went to uni. You couldn’t wait to get back to Reading after a couple of weeks.”

“I was fine once I made a few mates in Nottingham.” He’d been awkward and homesick, and not as mature as some of the others he’d been thrust into student halls with. But once he’d joined a couple of societies and found a few friends, he’d been all right, grew into himself, and hit the gay scene with gusto. “Besides, I’m in Basel for work, not pleasure.”

“Is it going all right? I thought you were getting a bit bored before you went.”

Laura was right. Before Basel he’d been growing stagnant in the job. The best projects were always at head office, and he’d started to feel he was getting crumbs rather than something really interesting to work on. “It’s great. It was a bit daunting when I arrived, and I have to do some bloody long hours, but I like it. It took a bit of time to settle down, but my Swiss boss told me the client is really happy with me, and there’s a buzz in the office that you just don’t get here.” The buzz in his love life had also helped a great deal.

“Life’s not all work. Have you made friends there?”

“My colleagues are nice,” he said carefully.

“Anyone more than ‘nice’? I know you’ve not really recovered properly from splitting up from John, but maybe there’s someone who can help you get back on the horse.”

Mark nearly choked on his beer. “What? That’s bullshit—John is ancient history.”

“Oh, come off it. Mum told me she was worried that you’re working longer hours, not going out as much, and haven’t even had a sniff at a new boyfriend since John left.”

“Rubbish!” he spat. His mum was the last person he discussed his love life with. It was bad enough she asked him if he had a boyfriend every time he called. The sad sigh that accompanied his negative response made him count to ten silently in his head to stop him saying something he’d regret.

“Hit a nerve, did I?” Laura said, a smug smile tugging at her lips.

“That doesn’t explain why you’ve not started seeing someone new. I know you work hard, Mark, but you weren’t a hermit.”

She was like a dog with a bone, and he answered before he could stop himself. “Who says I didn’t?”

Laura let out a gleeful shriek. “Oh, so there is a Mr. More Than Nice. You’ve got yourself a Swiss fella! No wonder you’re here sulking like an old goat.” Enter the rafflecopter draw or leave a comment below telling Rebecca about things that surprised you about where you’ve lived or place you’ve visited. 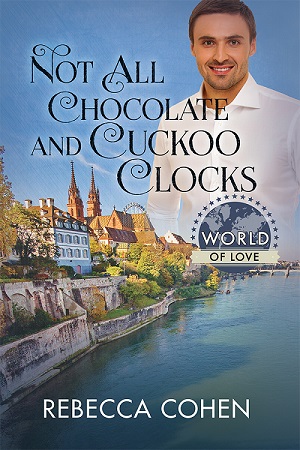 Title: Not All Chocolate and Cuckoo Clocks

Blurb: Neither of them wants to fall in love, but getting exactly what they don’t want might be the best thing to ever happen to them.

Review: Mark is working in Basel for three months and while his work is challenging but good his home life is a bit bleak, when he meets Steffen his social life looks up but will he be able to let go when he returns to England. Steffen isn’t looking for anything permanent, meeting Mark has him hoping for a short fling but with Mark’s departure date looming before them Steffen hopes that Basel and himself have wormed their way into Mark’s heart.

Rebecca Cohen has woven a tale that brings the heritage of a city to life with her wonderful descriptions.

Mark and Steffen are two men just looking for company, their relationship starts out as work acquaintances but rapidly becomes more as they seek hot sex and friendship. They become close as Steffen shows Mark the delights of Basel, but while they both know that Mark’s time in Basel is limited they can’t help but wish for more.

I must say that I found it hard to stay connected with the story, while I loved discovering Basel I thought that for the length of the book there was a lot of detail about Basel that took away from Steffen and Mark’s relationship. I ended up not really seeing a connection between Mark and Steffen that would explain Mark making a permanent move to Basel, it just felt like they were investing too much for what we saw on page.

The story is wonderfully written and the characters are great guys, I just think the story got bogged down in so much detail about Basel that we miss a lot of interaction and development of Mark and Steffen’s relationship.  That isn’t to say that what we did get wasn’t interesting and fun to watch because it was, but it’s muted and doesn’t really appear to be the focus of the story.

I recommend this to those who love travel and discovering heritage and customs, a relationship that blooms with love when neither man expects it, and a sweet happy ending.