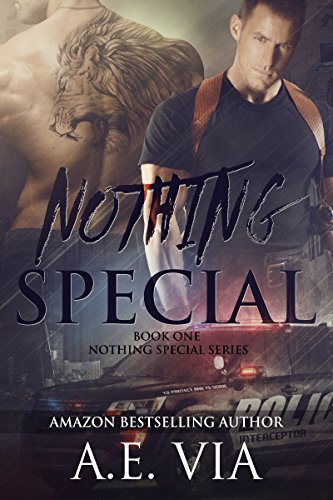 Blurb: Detective Cashel ‘Cash’ Godfrey is big, tattooed and angry so people typically keep their distance. He’s fresh out of the police academy, however, no one is looking to partner with the six foot four beast with a huge chip on his shoulder and an inability to trust. When Cash scans the orientation room he wasn’t expecting to find sexy hazel eyes locked onto him. Eyes of the handsome Detective Leonidis ‘Leo’ Day.

Leo is charming, witty, hilariously sarcastic and the only one that can make Cash smile. He’s proud, out and one bad-ass detective.

Together Cash and Leo become the most revered and successful narcotics detectives Atlanta’s ever seen. Able to communicate and understand each other, without even having to voice it, they quickly climb up the promotional ranks.

When Cash saves Leo’s life in a raid that turns deadly, Leo begins to see something in the big man that no one else does…something special. But Leo fears he’ll never break through the impenetrable wall that protects Cash’s heart.

Review: God and Day have been partners on the force for over four years and in that time they have found out that they are in love. Through thick and thin you can definitely see that these two guys are perfect for each other. However God has a few secrets that might just come out and well your just going to have to read the book.

There is quite a bit of passion with these two sexy men. However they also have tempers that heat up fast. Protection is something these guys have in spades. These two are real alpha’s but God is more intense I would say. The sex is smoking hot and damn if you don’t want to jump in a pool to cool off.

However there were some parts of the story that showed the author didn’t do much in the research department. For one you might start to feel better when you have pneumonia or close to it, but you definitely won’t be back to work, especially at a police department. Plus sexual feelings while doing a raid would get you killed or suspended. Also the author seemed to loose me at the foursome part, why add something that was not needed. That extra sex brought the book down a whole heart in my eyes. I don’t like sharing or cheating, and to me it is all the same. Then there was the four years of wanting to all of a sudden you get down and dirty, sorry but that is just off.

To top it off the other characters and their actions changed so fast, I was stuck with what the hell. Also most of the crap they did at the station would have gotten them suspended right off the bat. There was no real police work in the story just here and there, which was not a good sight. I was hoping for a bit more in that aspect of the book. To much sex not enough police investigation was a bit over used. There was no twists to this book and that was disappointing. All in all, the book just was not what I expected to read.

Now on one point I really did like the book, well until the foursome and then it went down, but I did like the book. The way the God’s family came back was rushed and not something that would be believed. I am sorry but you go through most of your life with no one knowing, then all of a sudden they find those tapes of what is happening, I would say no. This book had great potential but damn if it didn’t really flop in a way.

However as I said before I did like the book, but I sure do hope that the next book has a bit more of what I want and nothing added that wasn’t needed.