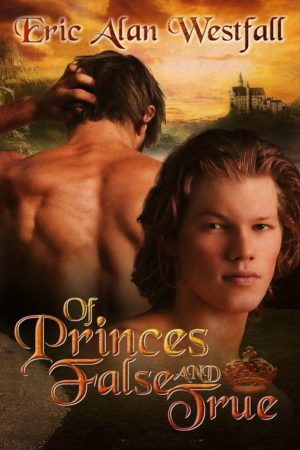 Title: Of Princes False and True

Blurb: A tennis match? Starting a war between the Duchy of Avann and the Kingdom of the Westlands?

Only in a fairy tale.

When Prince Henry hurts a young ball boy who told him Danilo’s ball was inside the line, Danilo’s response is automatic. Punch the prince’s face, pick him up left-handed, and break the royal jaw. Unfortunately, there’s another “automatic” at work in the Westlands: a death sentence for whoever strikes royalty.

King Hiram can’t—won’t—change the rule of law to rule by royal whim. But he grants the Heir of Avann fifteen days to find words which will persuade him to let Danilo live.

In those fifteen days: Magick. The gods, goddesses and gender-fluid deities on Deity Lane. Kilvar, the assassin. A wallet which opens in a bank vault. A mysterious old man. The Lady of All. The Magickal Hand writing, rewriting. A fairy tale within a fairy tale. A huge horse called Brute. And at the end…perhaps the right words and a most unexpected love. Plus a deity-supplied dinner with just the right amount of garlic.

81,380 words of story. All royalties will go to a local LGBT organization.

Review: When Prince Henry hurts a young boy for going to get Danillo’s ball back he takes it upon himself to teach Henry a lesson about picking on those smaller than him by punching him. Unfortunately that is a death sentence. King Hiram tells Danillo find the words that will persuade him to let Danillo live.

Danillo’s journey is quite adventurous, lively with humour. Diety Lane was interesting with all manner of different characters being introduced and interacting. Danillo does a great job communicating with a manner that is quite adorable at times for me.

I really enjoyed this story except for Henry. I mean he is mean and abrupt then all of a sudden out of the blue does a complete turn about. I did not understand the sudden change of heart so it threw me a bit.

There is so much going on in this adventure of Danillo’s that it is impossible to cover everyone and everything happening. Needless to say it was a well written journey that had me laughing now and then at some of the characters actions and words. I truly loved everything about this book.