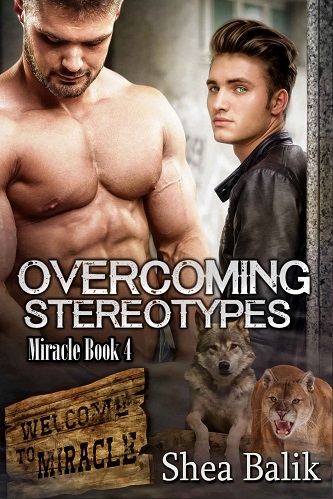 Blurb:   In a world where everyone was against them, they needed a Miracle. What no one had expected was to find their salvation in an abandoned town that was ready to collapse. Yet, that is exactly what happened when they moved to the town of Miracle, Oregon.

Kellach Alder hadn’t been given a chance in life to be the man he knew he could be. It never occurred to him that if he wanted others to see him differently, he would have to stand up and be the person he wanted to be.

Trygg Snow was sent to kill Kellach and his friends. Already conflicted about his mission, Trygg knew he wouldn’t be able to complete his assignment when he came face to face with his mate. If only Kellach, a mountain lion shifter, would look past the fact that Trygg was a wolf shifter.

Against all odds, and an army headed their way to destroy them all, Trygg and Kellach must find a way past their differences if they are to survive. The only way to achieve that is by Overcoming Stereotypes.

Review:  Each book in the Miracle’s collection features a new romantic couple. To enjoy the overall story arc and crossover characters, I would recommend reading the series in sequential order.

In the world of paranormal’s, it is a crime to be gay and if found gay they are put to death.  Many run and hide from this fate.  Some go along with it and leave their fated mates behind.  The council is behind it all and send out killers to hand over the death sentence.  Trygg was sent to find the men on his list and execute them, that is until he realizes one of them is his mate.

Kellach is a strong feline but then again with his past one would definitely expect him to be.  His father was a cruel man, a man who handed his own daughter to wolves who ended up killing her.  Wolves that it would seem were run by the brother of his mate.  However there are many secrets yet to be found and you will be surprised by it.

This was a fascinating read and I am glad to have had a chance in reading it.  There were many twists to it and quite a bit of surprises to follow.  It is a very action pact story that will keep a person entertained for sure.  I enjoyed reading it and can’t wait to get started on the next book.