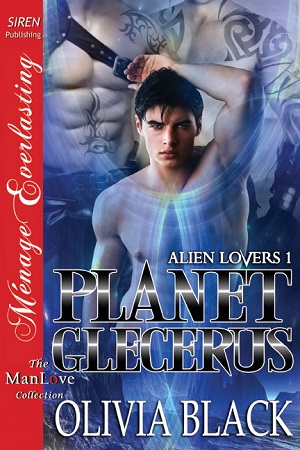 Blurb: The year is 2327. Earth, once strong, is now trying to recover from the devastation of the Great War. During the battle, millions of lives were lost and cities were destroyed. Needing to rebuild, the government turned to other planets. One day, a starship arrived from the planet of Glecerus. The aliens traded technology and medicine for willing humans to become mates to their people.

Sebastian Cain is struggling to survive. His only option for a better life is to leave Earth. He volunteers to go to Glecerus. He’s looking for a fresh start and the only family he has left, an older brother. But life on Glecerus takes some getting used to, and Sebastian must learn the customs before becoming a mate to a Glecerian male.

High King Auden Q’Tal and Captain Regin Priq’aq are both interested in becoming Sebastian’s mate. Instead of bidding on the human at auction, the aliens battle it out, and the winner gets to mark and claim Sebastian.

Review: Volunteering to leave earth for a better life and to see his brother again Sebastian is in good spirits until he realizes that he does not have a clue about things that were explained in the manual he was given to read but never need. Luckly he makes a new friend named Georgie who knows everything in the manual. Along with a few other volunteers Sebastian navigates the rules carefully while attempting to calm himself. When he meets captain Regin Priq’aq aboard the ship that carries them to Glecerus he feels something for the alien upon first sight and the captain feels the same and has every intention of bidding on the young man.

It comes out that Sebastian’s brother is mated to one of the alien prince’s and so that makes Sebastian royalty as well and is taken off the auction progress. In Sebastian’s case a different set of rules apply as two males, the captain and the ruler of Glecerus, Auden, both want Sebastian.

I really enjoyed this first book as it details as much as possible without overdoing the information on the different aliens, planets and rules that are in place for the humans as well as the details surrounding the characters. I found myself immersed in a world that intrigued me to no end.