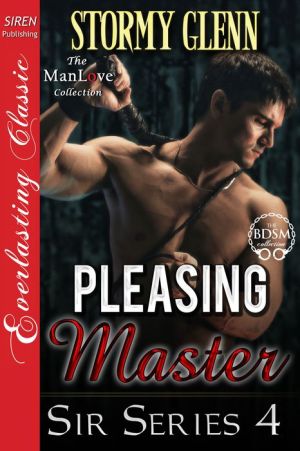 Blurb: Jackson Davis is considered a gay man’s wet dream but he’s tired of finding lovers that only seemed to want him for his looks and not a real relationship. One night at a bar, Jackson discovers a man watching him. The man never approaches him, never speaks to him. When Jackson finally confronts the man, he is astounded by his reaction. Thus begins Jackson’s obsession with pleasing Michael.

And what follows is a story of frustration and confusion for Jackson as Michael commands and dictates to him, rewarding Jackson when he’s good and punishing him when he’s bad. Jackson is confused that he lets Michael dominate him, wondering if it makes him less of a man. Can Jackson accept the fact that pleasing Michael makes him happy or will he lose the best thing that ever happened to him?

Review: Each book in the Sir Series collection features a new romantic couple. To enjoy the overall story arc and crossover characters, I would recommend reading the series in sequential order.

Jackson is absolutely gorgeous and has a hard time finding that one man for him. Then his best friend points out a man staring at him and his interest is piqued. He is just not to sure of what the man wants, but damn if he does’t want it.

Michael is a dominate and wants the lifestyle twenty-four-seven. The problem is finding the boy for him, that is until he sees Jackson. Too bad his boy has no clue about what is going on. You guessed it, it is not going to go as easy as Michael hopes for.

This story was previously published but has been revised and expanded for our enjoyment. I am still not too sure of many of the things these guys like, but Jackson definitely had a harder time then I had thought he would have. Michael was definitely pushy and too cocky for my taste, but when the story is all together and you can just see the magic. I loved Jackson, but in the end it was Michael that won the spot in my eyes. He is still pushy but he also has a very sweet side. I did enjoy reading it and can see myself reading it more than once.