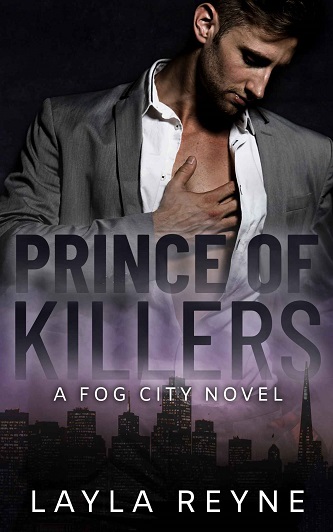 Blurb: No indiscriminate killing. No collateral damage. No unvetted targets.

These are the rules Hawes Madigan lives by. Rules that make being Fog City’s Prince of Killers bearable. Soon, he’ll be king–of an organization of assassins–and the crown has never felt heavier. Until the mysterious Dante Perry swaggers into his life.

Dante looks like a rock god and carries himself like one too, all loose-limbed and casually confident. He also carries a concealed weapon, a private investigator’s license, and a message for the prince. Someone inside Hawes’s organization is out to kill the future king.

In the chaos that follows the timely warning, Hawes comes to depend on Dante. On his skills as an investigator, on the steadiness he offers, and on their moments alone when Hawes lets Dante take control. As alliances are tested and traitors exposed, Hawes needs Dante at his back and in his bed. But if the PI ever learns Hawes’s darkest secret, Hawes is sure to get a knife to the heart–and a bullet to the brain–instead.

There’s no shortage of twists and turns in this new romantic suspense trilogy from Layla Reyne. Prince of Killers is book one of three. Fair warning: buckle up, cliffhangers ahead!

Review: Hawes is the prince of killers. A title he hates. He’s trying to take the family business in a different direction by not killing innocents. There are those that are not happy. The P.I. he meets, Dante, is a mystery. Everything checks out on him.

Though I liked the story I had a few problems with things throughout. For instance Holt, Hawes brother never discovered the damning evidence on a particular person until it was too late. Yet we were never told how he found out. I honestly thought Hawes was a little too trusting of Dante. I mean Hawes is an assassin, you would think he’d know better than bring a complete stranger into his home and around his family given the cliffhanger at the end.

There were other things but these bothered me the most. Aside from those things it was an enjoyable action packed, suspense filled read with plenty of drama and betrayal.

I am looking forward to reading the next book to see what happens next.