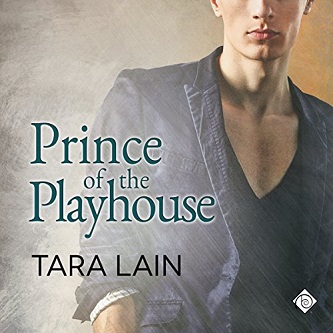 Title: Prince of the Playhouse

Blurb: Driven by his desire to become a successful fashion designer and concerned with hiding his questionable past, Ru Maitland has let obsession with action movie star Gray Anson on the big screen replace his social life. Then obsession and reality collide when Ru is asked to design fashion costumes for a special performance of Hamlet at the Playhouse in Laguna starring none other than Gray Anson. Gray turns out to be a compelling mix of shy and brash and, despite a high profile engagement to a female socialite, the signals Gray sends Ru have his libido doing the salsa.

Gray Anson has what most people only dream of – great wealth, huge fame, a job he loves. For that, he’s given up any semblance of privacy and the right to say no to the thousands of people who depend on him and the millions who love him. He sees everything he’s ever wanted just outside the bubble of his life, but how can he make the compromises needed to embrace it? When Ru’s shady past crashes into Gray’s paparazzi-haunted present, both men have to learn that sometimes the only acceptable compromise is the truth.

Review: The Prince and the Playhouse is the third book in Tara Lain’s Love in Laguna series. This is a series that you need to follow in order to enjoy properly. The characters are intertwined throughout and now that I’ve gone through two books, I looked forward to checking in with the couples from books 1 and 2. When starting this series I had the niggling feeling that I’ve tried reading a book from the series before, not realising it was a series, and didn’t enjoy the book. And surprise, surprise, that book was The Prince and the Playhouse. I have to say, now that I’ve gone through the audios of this series in the proper order, I really enjoyed and has been looking forward to this story.

KC Kelly has once again done a great performance for the book. I really have no complaints. To be perfectly honest, I was simply happy that he didn’t use the voice he had done for Ru in book 1 here, because I really hadn’t liked that. Also because of that voice, I didn’t really feel particularly close to Ru. But Ru is a character full of surprises and his story was excellent.

Ru Maitland is an up and coming fashion designer, he works alongside popular designer Shaz (Chase from book 1), who is also Ru’s best friend. Ru hasn’t done well in the romance department; he has been more concerned with his career and making it in the fashion industry. He also has a massive secret which he has never told anyone of his friends, and that past is just about ready to catch up with him just as his love life and career begin to take off. Ru has been hired to work for a well known movie director, who has turned his hand to directing a stage production of Hamlet, with Ru providing his own unique brand for the costumes. This production is even more special because it features the world’s hottest action star as Hamlet, as well as one of the hottest actors on TV. Both men are attracted to Ru, but for Ru it is action star Gray Anson who is the main attraction. Ru has crushed over the movie star for a long time and now he meets the man in real life.

The possibilities aren’t exactly endless for an out and proud fashion designer and a closeted action star who is under strict order to keep that closet door firmly shut. Gray Anson isn’t exactly happy with how his life is going, mostly because every aspect of his life, including the people (women) he is seen with, is controlled by his bigoted manager. Gray knows he can’t offer a whole lot on the relationship side of things but he can’t help his attraction to Ru and the wonderful thing that his life becomes when they are alone together, because they truly can’t appear as anything more than friends in public.

The guys have a strong connection which I really enjoyed hearing. Although I couldn’t help but feel sorry for Ru even though he was ready and willing to keep everything in the closet for Gray. Gray as a character wasn’t entirely likable to me at first, but as the story progressed his character changed in positive ways because of Ru.