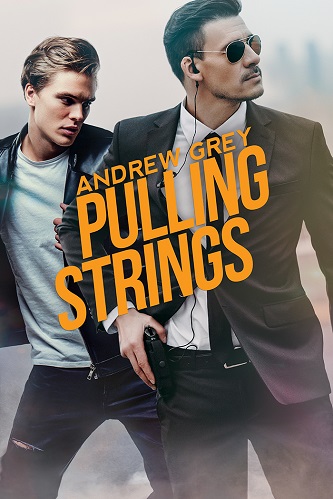 Blurb: A high-stakes case of industrial espionage ties them together, but before they can pursue their attraction, they must find out who’s pulling the strings.

Devon Donaldson doesn’t know how a folio of stolen corporate secrets found its way into his bag, and certainly can’t think of anyone who’d want to frame him. The trouble is, he has to convince Powers McPherson.

Devon’s firm hired Powers to investigate the theft of a new banking system, and so far Devon is his only lead. While Powers’s gut tells him Devon is innocent, he has no intention of letting Devon out of his sight… for more than one reason. Working together to get Devon’s life back leads to feelings far beyond cooperation. But before they can act on them, they need to find the group of thieves intent on ruining Devon’s reputation.

Review: Pulling Strings is a standalone novel by Andrew Grey. While this is something a bit different from what I normally expect from Grey’s writing, I can’t say that I’m surprised or disappointed that he mixed things up a bit for this story. The most important parts of his writing that I love the most are there: engaging writing style and use of words, relatable main characters, palpable chemistry between the romantic leads of course a good dose of drama.

What you read in the blurb is what you get, so I’m going to keep this review quite short so that I can avoid too much spoiler details. The premise of the book is quite simple: new employee gets to know the man who is investigating corporate sabotage at his work, while proving his innocence and finding the real culprit, feelings emerge. However, what makes this book enjoyable is the complexity of the characters as we get to know them. It’s a lot of fun and the chemistry that is shared between the two characters is believable and makes me think of a Hollywood movie, a sort of unbeatable duo (even if it’s corporate type of story rather than crime or spies).

The two main characters are Devon Donaldson and Powers McPherson. Devon is a relatively new employee for the company he works for who gets caught in a web of corporate sabotage when the man hired to find out who is stealing company secrets, Powers, follows him under the suspicion that Devon is the culprit that he is after.

Devon is hard working and quiet, everything that you would expect from this type of character. He is the conscientious employee who unwittingly looks suspicious. He’s looking to make a positive impression at work. Powers is your typical type of security/private investigator. He can blend into the office environment, as though he is a spy, he has a quick mind and is dedicated to finishing his job assignments.

I enjoyed the passion between these guys, because while the corporate intrigue was an important part to the story, it was the passion followed by the romance that really was properly fleshed out. An enjoyable read, if you like a bit of intrigue and mystery, particularly when it’s wrapped into a neat package set in a multimillion dollar company.