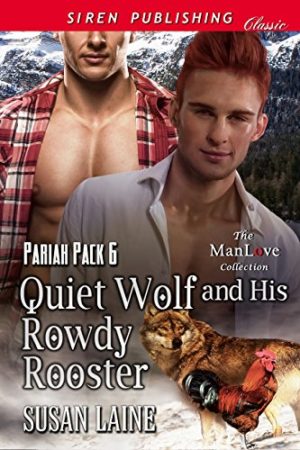 Blurb: Sean Cameron is a pint-sized rooster shifter, but he’s got the sassy attitude of a much larger animal. He has a knack for getting into mischief, namely bar brawls.

Then revolts aimed at paranormals shift into high gear, and Sean is forced to seek shelter out in the boondocks. There he meets Ty Atwater, the Delta wolf of the Pariah Pack, an accountant who enjoys the quiet life. He’s the sweetest and shyest guy in the world—and Sean’s mate.

But Sean harbors a dangerous secret that could get everyone around him killed.

Add to that a tempting cowboy, a bunch of violent bullies, and a pinch of voodoo magic, and an explosive cocktail of epic proportions is ready to stir up trouble—with Sean the troublemaker at its heart holding a lit match.

Review: Each book in the Pariah Pack collection features a different romantic couple. To enjoy the overall story arc and crossover characters, I would recommend reading the series in sequential order.

I have never heard of a rooster shifter and this sound quite unique to me. To top it off, he wasn’t just a rooster but something much more deadly. Sean has been cursed and was a danger to everyone around him. However if you look at him, one would not think so. He was bright red hair, wears heels, eye liner and is very out there. Once rich, now he is as broke as a church mouse. He also has one hell of a bad attitude, and it is going to get interesting. He has met his mate.

Ty is a very big shifter but is as gentle as one wouldn’t expect. He was also quiet which his mate is not. You mix someone so sweet and shy with the opposite and it is going to get explosive. To top it off, Sean has one hell of a secret he is holding on to. One that can kill, and well you will have to read it.

Now the first thing I am going to say is it felt just a bit off, but not by much. It was an entertaining tale that has a few surprises for you. It has danger, excitement, hot sex and voodoo magic going on in side of it. And that is just a bit of what you will get. I got a crack out of it and enjoyed it quite a bit.

I love the unique character this author used and can not wait to get my hands on the next book.