Hi peeps! We have L.A. Witt stopping by with her new release Rabi and Matthew, we have a great excerpt and a fantastic $10 Riptide GC giveaway so check out the post and leave a comment to enter the giveaway! ❤ ~Pixie~ 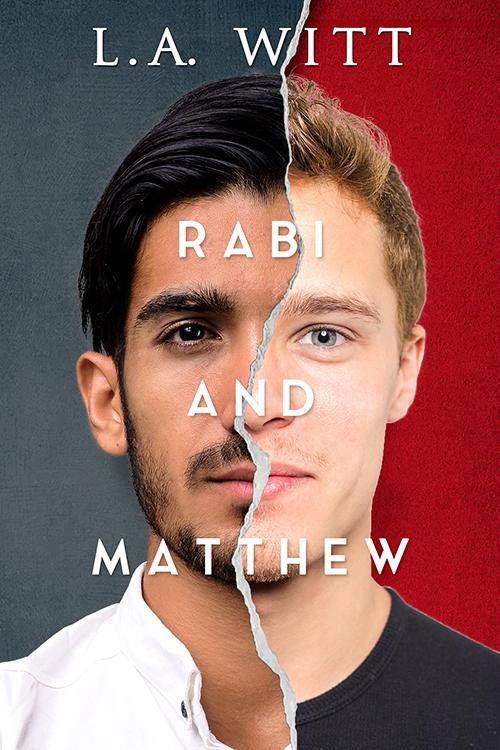 A queer retelling of Romeo & Juliet, except no one has to bury their gays.

A decades-old family rivalry is reaching a boiling point as the patriarchs vie for a seat in Congress. Democrat vs Republican, Muslim vs Christian, Hashmi vs Swain — the Midwestern town of Arbor Hills is one spark away from an explosion of violence. So when two men find themselves irresistibly drawn together at a party, only to discover they were born on opposite sides of a bloody battle line, Matthew Swain and Rabi Hashmi know they should leave well enough alone.

The pull between them is magnetic, though, and it’s too strong to ignore. Unable to resist, they meet again in secret. Generations of hatred can’t temper the passionate love growing between them, but two men falling for each other in the middle of a war zone can’t hold back the inevitable clash.

And when decades of political, religious, and personal strife finally come to a head, there will be blood.

Rabi Hashmi could not wait for this stupid election to be over. As he and his cousin Mustafa canvassed yet another neighborhood, reminding people to vote for his father, his feet hurt and he was just done. Completely done.

At the end of a driveway, Mustafa stopped. “I, uh, think we should probably skip this one.” He gestured at the lawn, and on it, the Bob Swain for US Senate sign.

“Good idea.” Rabi kept walking, his cousin on his heels, to the next house, which didn’t have any political signs out front or stickers on the minivan parked in the driveway. It was anyone’s guess, then, what their affiliation was. This wasn’t one of those explicitly red or blue neighborhoods, and it wasn’t unusual to find rabid pro-Swain and pro-Hashmi voters right next door to each other. That was the dividing line in the city of Arbor Hills these days. Not just red or blue, not just Republican or Democrat—Swain or Hashmi. As if the rivalry between the two families hadn’t caused enough tension for the last several decades.

Smart move, Dad. Run against a Swain for the Senate. That’ll stop the fighting for sure.

He rolled his eyes at his own thought. It would be pointless to try to talk his father out of it again. The election was just a few weeks away now, and millions of dollars—not to mention countless man hours—had been poured into the campaign. There was no turning back. Rabi just hoped that when the dust settled and the votes were counted, the results didn’t ignite violence. He hoped, but given the long and bloody history between the families, he wasn’t optimistic.

No one answered the door at the house with the minivan out front, so Rabi tucked an Emir Hashmi for US Senate flyer into the storm door and headed back down the driveway.

“You think there’s any point to this?” Mustafa scowled at the handful of flyers he was carrying. “Kinda seems like anyone who cares has already made up their mind.”

“I don’t know if it helps or not.” Rabi started up another driveway. “But Dad’s going to need every vote he can get, so we gotta do it.”

Before Rabi could respond, an engine revved, and he turned just as a diesel pickup stopped at the end of the driveway.

Derek Swain leaned out of the driver’s side window. “You boys lost?”

From the passenger side, his younger brother Nate called out, “Or did you lose your camel?”

Rabi forced his expression to stay neutral. His father had driven it into his head that everything a Hashmi did, every word they said, reflected on him, and being unprofessional in front of potential voters could cost votes. And hell, even if votes weren’t an issue, the last thing Rabi and Mustafa needed was a confrontation with a couple of Swains. Those never ended well for Hashmis.

Calmly, he said to Mustafa, “Come on,” and gestured for him to continue toward the next driveway.

Mustafa planted his feet, though, and smirked at the Swains. “Hey, while you assholes are here, is that hot cousin of yours still single? Because I’ve got—”

“Dude, shut up.” Rabi elbowed him hard and backed it up with a glare. “Really?”

“You touch a member of my family,” Derek snarled, stabbing a finger at Mustafa, “and that little fight we had in the locker room will be nothing compared to what’s coming to you.”

Mustafa started to speak, but another glare from Rabi made him shut his mouth. Rabi nodded sharply up the driveway.

“Hey!” Derek barked. “I’m talking to you, Hashmi. Stay away from my family.”

“You don’t have to worry about that,” Rabi said through his teeth.

Derek flipped him off. Mustafa returned it. Nate almost came unglued, and it looked like he was reaching for his door, but Derek put a hand on his chest and pulled him back.

Then the tires squealed and the truck was gone.

Immediately, Rabi whirled on his cousin. “What is wrong with you?”

“What?” Mustafa put up his hands. “Am I supposed to just take it when they—”

“Do you want shit to hit the fan? Huh? Because things are going to get ugly, and you’re not doing a whole lot to keep the peace.”

It was Rabi’s turn to roll his eyes. “For fuck’s sake.” He wasn’t going to explain—again—why it was fucking suicide for someone in their family to taunt someone from that family into violence. He shook his head and started walking again. “Let’s just get out of here. I’m done.”

Mustafa didn’t move. “We still have two blocks to canvas.”

“Yeah, and I don’t really feel like getting our asses beat because you can’t stop yourself from pissing on hornets’ nests.”

Mustafa protested, but Rabi ignored it. It was no wonder his cousin had been involved in an “altercation” with the Swain boys back in high school. He was hot-tempered, and he’d swallowed every drop of the anti-Swain poison they’d both been raised on. Rabi wondered if Mustafa even knew why the Hashmis and Swains hated each other so much. Or if anyone did anymore. The Swains were unapologetic racists, of course, but they devoted a disproportionate amount of their energy to hating the Hashmi family in particular, and no one really seemed to remember what had ignited that.

As if it mattered. The rivalry had existed for decades, fueled by every Hashmi misstep a Swain could use as an excuse for retaliation. If this race for a seat in Washington didn’t bring that fight to a head, Rabi didn’t know what would. He understood his dad’s political ambitions. Hell, he admired them, and anyway the last thing this state or country needed was another right-wing white supremacist in a position of power. But Dad running against him? That was asking for trouble. Just them running against each other for city council had been incendiary, but vying for a seat in the Senate? Actively campaigning and mud-slinging all over the state for the better part of a year? How was his father not asking for hell to rain down on every Hashmi within a hundred miles?

Maybe thinking that made Rabi a coward. Or maybe he was just too used to walking on eggshells because of his faith, his skin color, and his name. He was too scared to rock the boat. So maybe he was a coward, or maybe his father was reckless, but he didn’t see how this would end well. Not for their family.

His stomach knotted and he picked up speed toward his truck. The outcome of the election was up in the air, but deep in his heart, he knew that no matter who won, it was going to cause an explosion between the Swain and Hashmi families like no one had ever seen.

And he had no idea how to stop it. To celebrate the release of Rabi and Matthew, one lucky person will win a $10 Riptide gift card.

(Entries close at midnight, Eastern time, on November 10, 2018. Contest is NOT restricted to U.S. entries.)