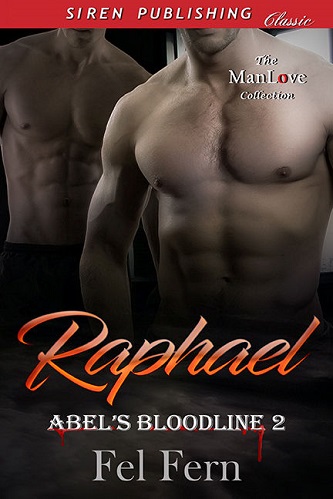 Blurb: Some scars can never heal and Derrick knows he can never return to his old life after the trauma he’s experienced with a rogue vampire group. One reckless night nearly costs Derrick his life, but his unexpected guardian angel appears in the form of Raphael. Raphael’s the only reason Derrick’s maintained his sanity, but he never thought he’d see the vampire lieutenant again. Derrick doesn’t understand his magnetic attraction to Raphael but he intends to find out if there’s a possible future between them.

The vampire Raphael has never been interested in finding a mate, until Derrick Pace. After their kidnapping ordeal, Raphael’s closely watched out for Derrick, although he doesn’t comprehend why. When a new enemy rises, Raphael decides he’s done watching his mate from the shadows. He intends to claim Derrick, even if that means igniting a fight with another vampire coven.

Review: Each book in the Abel’s Bloodline collection features a new romantic couple. To enjoy the overall story arc and crossover characters, I would recommend reading the series in sequential order.

Derrick had thought his brother’s problems were mental, but then he proved that it was more than that. It had led them straight into the paranormal world and monsters. He had been captured along with a vampire, tortured. It almost got him killed. Now he tried to stay away from that type of life, but his mind kept reminding him of Raphael.

Raphael has found his mate and decided to leave him alone. He had not wanted a mate but he wanted Derrick. He watched him to keep him safe, but one is never safe from the past.

This story has a dark tone to it that I didn’t care for. It is a very unique story that is very entertaining. The only thing is that even though it is a short story it feels like it comes off longer. You get excitement, danger, a new world and some sweet sexy times in this book and quite a bit more.

I will admit that even though I did like it, it is not one of those stories that will get read more than once.