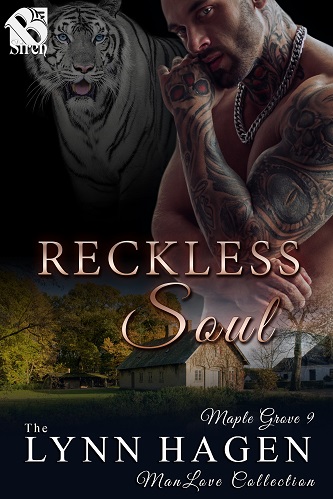 Blurb: His entire life Roy Benton has tried to be half the man his father had been. Unfortunately, he was born with his mother’s petite stature. Not even joining Maple Grove police department makes him feel manly, especially when the other deputies are built like linebackers. Roy is always trying to prove he can handle the job, that he doesn’t need anyone’s help, until a psychotic vampire sets his sights on Roy.

Calhoun Reckless left his pack behind when he agreed to help Panahasi shut down two drug labs. However, the men running one of the labs escape, and are now after Calhoun. One twisted vampire. One evil wolf shifter and a crazed demon want him dead. When Panahasi hides Calhoun in a small town, he has no idea he would find his mate. But the men after Calhoun will stop at nothing to not only destroy him, but the human who has come to mean everything to Calhoun

Review: Calhoun was working for the Ultionem but needed a very long break from it all. He could still remember the bodies in their cages. He needed a change of pace from it all. Seeing his brother had him finding his mate. A mate that was human and had no clue of what was creeping in the dark.

Roy had went out and got stinking drunk then woke up to the sexy bartender. To bad he was still a virgin, it could have been nice. What was not nice was the creeps coming out. To learn he was a mate was shocking but not as shocking as what danger was coming.

Slow and easy read with characters that were quirky as hell. Their world sounds pretty cool if not dangerous. However the fact that even though it does give you the happy ending, it just cuts out. It was to short for my liking and there was so much more that could have been added to make this story stand out. It felt very rushed and made me feel like I was missing so much.

Over all I have always loved reading stories by this author, but the way the stories are being told leave a lot to be desired. There is so much potential in it but the story fell short. Other than that I still enjoyed reading it.