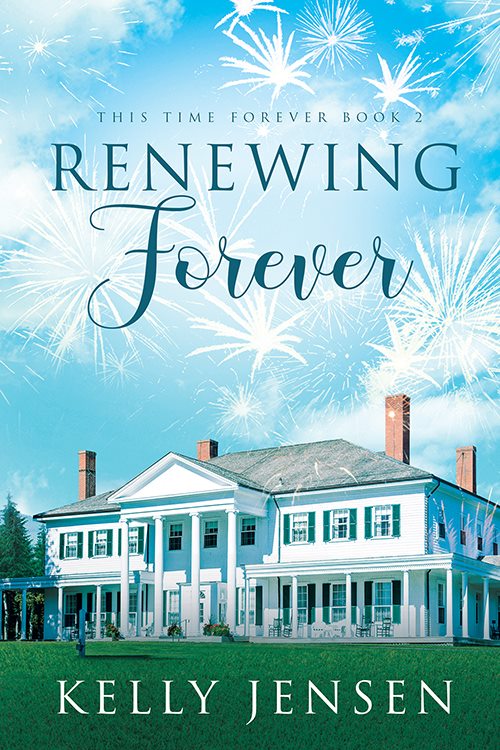 Renewing Forever is the second of a series of standalone novels focused on older characters who think love has passed them by. Frank and Tom’s story is a true second chance romance, reuniting childhood friends and first loves separated by an argument and thirty years of misunderstanding. I hope you enjoy reading about their renewed friendship and their plans for forever.

Tom pressed his cup into Frank’s, making a slightly squishy toast. “Drink up, I enrolled us in the zucchini derby. We’ve got half an hour to carve our squash before our race begins.”

Obviously the wings had been hotter than Frank anticipated. He was in the grip of a chili fever. Or they’d been laced with an illegal substance. “Carve our squash?”

“Finish sucking your fingers and c’mon.”

Frank followed, a bright ball of something forming behind his breastbone. He’d just sucked down sauce that would sear an unapologetic path through his gut and would likely follow it with an afternoon of bad carbs. And now he was off to carve squash.

They weren’t the only adults lining up for oversized zucchini, plastic knives, and a small container of toothpicks. Seated at a table, Frank examined his squash, end to end. “I’ve never seen one so large.”

Next to him, Tom started giggling. “That’s what he said.”

Frank glanced over in time to see familiar mischief lighting Tom’s dark eyes. Without thinking too hard on it, he circled his thumb and forefinger around the zucchini and stroked downward. He got caught halfway, the sheer girth of the vegetable separating his fingers. “Oh my.”

Tom opened his mouth into an O and poked his tongue around.

The woman seated across from him snort-giggled and Frank laughed. “Dare you do put it in your mouth,” he whispered.

Tom glanced left and right, then put the end of his zucchini between his lips. He seemed to be working on a more lascivious expression than surprise when his eyes widened and he pulled the vegetable back out.

“I’m getting odd looks from the other end of the table.”

From another pair of men, both dressed in Pocono plaid—summer version. They were eyeing Frank and Tom with open suspicion. Frank gave the cuter one—as if he could ever find a man dressed in deer stalking camouflage in anyway attractive—a suggestive eyebrow raise.

Tom elbowed him in the ribs. “Stop, they’ve probably got a shotgun between the seats of their pickup.”

“Of course they do.” How Tom had managed not to end up a statistical smear on the sidewalk sometime over the past thirty years wasn’t exactly a mystery. He didn’t wear his otherness quite the same way as Frank did. Still . . .

Frank turned back to his zucchini. “Okay, tell me what to do.”

There was little point in attempting to make their zucchini any more aerodynamic than nature intended. Instead, they spent their time making wheels—out of zucchini—and attaching them with toothpicks. Tom fashioned a complicated axle arrangement while Frank carved numbers in the side of their dark-green vehicle. When they were done, Frank eyed their zucchini with a mixture of pride and embarrassment. How could he explain this to anyone outside of Pennsylvania? Would he even want to?

Tom took a few pictures, and they assembled by the top of the truncated skateboard ramp that formed the raceway. They would be competing against the deer stalkers. Not optimal, but preferable to having their asses kicked by the little girl whose father had actually tried to shave some sleekness into their vehicle.

Frank had the job of racer as Tom wanted to photograph the event. He posed with the zucchini, gesturing like Vanna White as he demonstrated the features of their vegetable: “Wheels. Toothpicks. A motivating motif of mesmerizing lines.”

“It will be the secret to our success,” Frank replied.

Frank placed his zucchini behind the starting line, aiming it toward the bottom of the ramp while trying to take into consideration the possible drag of their not-quite-even wheels.

Their racer made it halfway down the ramp before losing a wheel, causing it to careen sideways, narrowly missing their opponent’s vehicle, which moved out of range on rotating disks of greased lightning. Frank watched sadly as their zucchini tottered toward the edge and fell into oblivion.

He turned to face Tom, forming a mask of dejection for the camera.

Tom was waving him toward the ramp. “Pick it up, pick it up!”

Frank picked up their racer, stuck the wheel back on and launched it from the derailing point. It wobbled down the ramp after the other zucchini, finally crossing the finish line and landing end to end with its mate, delivering a vigorous bump.

Because there were no losers in the zucchini derby, each of them was handed a plastic medal announcing their second-place win. Frank held his hand up for a high five, and Tom slapped their palms together. Then, as he would have done when they were kids, Tom cuffed the side of Frank’s head, squeezed the bottom of his ear, and circled his neck with an elbow, dragging his head in close.

Tom seemed as surprised as Frank as their foreheads met, the faces coming together so much older than the ones that used to share such happy and exuberant grins. His grin only widened, though, and he gave Frank’s neck and shoulders another squeeze before letting go.

And Frank stood there, clutching his big zucchini and dinky little medal, wondering when he’d last felt so light and bright. To celebrate the release of Renewing Forever one lucky person will win a $25 Riptide Publishing gift card and a swag pack of stickers, art cards, and bookmarks!

Entries close at midnight, Eastern time, on November 17, 2018. Contest is NOT restricted to U.S. entries.