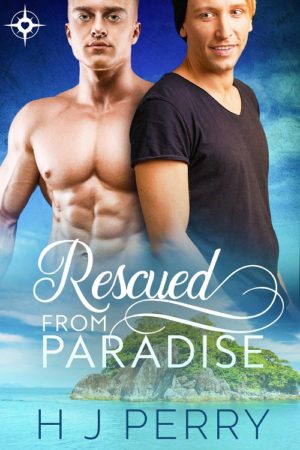 Mr. Don’t-Touch-Me Wade O’Rourke wouldn’t dream of something so pedestrian as living off the land. His family is monied and formal. Taking his place in his uncle’s company is the thing to do— never mind that he hates his life, and he has reasons to hate his uncle, too.

When Wade and Adam meet on an airplane, they don’t quite hit it off. But they’re the only two survivors of a crash landing on an island paradise, they have to join forces to survive.
Will Adam take a chance on love with the seemingly straight man? Underneath Wade’s business suit, which he once wore like armor against intimacy, is a hard body and a tender heart.

This full-length, standalone novel contains:
Two hot guys and a deserted island.
Tropical fruit too juicy to just eat.
A man damaged by his homophobic upbringing.
Steamy man on man love action and a happy ending.

Review: Adam and Wade are opposites that attract when the plane they are on crashes on an island with them as the only survivors. Adam is smart and sure about himself in every way. Wade comes from a family with money and living a life that his family wants him to. He despises working for his uncle and longs to life his life like he wants.

These two start a friendship that quickly turns into more as they explore each other and the island. When rescue happens Wade suddenly drops Adam like a bad habit for fear of his family. Wade does some soul searching and eventually they get together.

Although I wanted smack Wade a time or two and knock some sense into him I was glad he finally started living his life like he wanted.