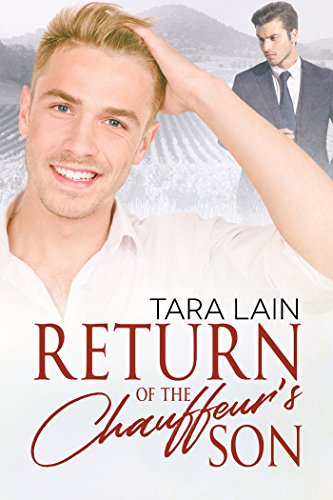 Title: Return of the Chauffer’s Son

Blurb: Luca McGrath may be returning to Napa Valley, California, as a promising chef with dreams of starting his own restaurant and winery, but his heart still lives with the bad-boy son of a billionaire, James Armstrong. Luca spent his childhood playing games with the golden boy of California society, so blinded by James he barely noticed the dark, quiet lure of his conservative older brother, Dylan Armstrong.

But now Luca’s home, and his own powers of attraction are enough to make James question his dedicated heterosexuality and his promised marriage to a wealthy and powerful businesswoman. The obvious attraction between Luca and James spurs Dylan into action—but he’s fighting a huge secret. While Luca dreamed of James, Dylan dreamed of Luca. When Luca gets caught in the struggle between the brothers and gets accused of culinary espionage he’s ready to chuck the fairy tale—unable to even imagine Dylan’s power to make his dreams come true.

Review: The Return of the Chauffeur’s Son is a standalone book by Tara Lain. Tara Lain is not an unknown author for me and I have enjoyed a number of her books and the writing style that she uses. In fact, I’ve actually heard the audio of this book but hadn’t yet read it until now. It’s sweet and charming and had me engrossed from start to finish. It’s one of those books that I think just about anyone could listen or read this book and enjoy their escape from reality.

The story starts with Luca McGrath finding his way home to California after some years away in college and then making his name as an up and coming chef. He was raised in Napa Valley by his father after the death of his mother. Luca grew up on the Armstrong winery estate where his father was the family chauffeur. The Armstrong family supported Luca and his father after the death of Luca’s mother, although he was a baby at the time. As a result, Luca grew up alongside Armstrong boys, more so James who is Luca’s best friend and Luca’s first crush..

Luca’s homecoming is joyous but things are complicated when it comes to the Armstrong brothers. While Luca has spent so many years of his life pining away for James, he begins to learn that that he entirely overlooked James’s much older brother, Dylan. Dylan is helping Luca with just about everything but doesn’t know how to communicate his feelings. He is the strong and stoic type and there is no end to his chivalry, with his need to protect his baby brother. While James is a playboy, who is now engaged and seems keen to now suddenly explore his sexuality. Dylan is frustrated because he is attracted to Luca, but his parents are dismissing James’ behaviour as James continued hero worship of his out and proud, gay older brother.

Luca and Dylan don’t know much about each other, that much is clear from the start. However, as they get to know each other there is a lot they have in common, including a passion for movies and once again they have startling similar tastes. It’s just another point that shows that there is more beneath the surface.

Overall, this is a fun, sweet and sexy novel that shows us that sometimes a HEA is right in front of us and with the person least expected.