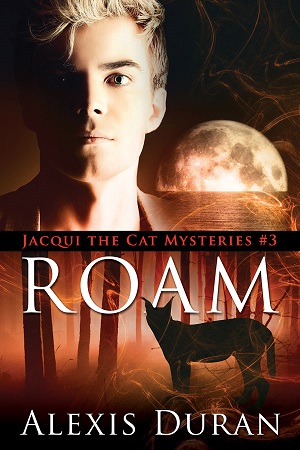 Blurb: Being half-cat isn’t easy in a human world, and Jacqui’s life has just gotten a lot more complicated now that he’s dating the hot deputy sheriff who lives across the street. Wyatt’s brain might explode if he finds out his lover turns into a cat sometimes. And even more unthinkable, Wyatt might REJECT Jacqui if he discovers that his boyfriend and Satan the feral wild cat are one and the same! As if Jacqui doesn’t have enough to worry about, he becomes the unwilling foster parent of a drooling dog, and soon discovers a nefarious plot involving marauding Rottweilers with a taste for Cat. Follow Jacqui into trouble in his most exciting misadventure yet!

Review: Jacqui is one big ass cat shifter although he has no clue what he truly is or how he became what he is. To top it off his cat had a mind of his own and he was usually found talking to himself or arguing. He was a designer of neutral gender clothes and was pretty good at it. He was falling in love with a certain deputy but was afraid to take it further. He has someone trying to get to him and he didn’t trust to many people. He wasn’t even sure if he should tell Wyatt about his other half or not. He doesn’t need to find trouble because trouble finds him, in this case a pretty beat up dog. Leave it up to him to find answers and get into trouble.

This was quite a bit better then the first two, but it still leaves you hanging at the end. It is a very unique tale with quite a bit going on to keep you entertained. The only issue is that it is a very slow moving tale. It also feels like it was rushed and I think that it would have been better had it not been cut in to seperate stories.

Other than those issues it is a very cute little story. I enjoyed it more than I did the first two stories.

At first when I started reading this series I wasn’t to sure if I wanted to waste my time on it, but it is looking up.