Hi guys, we have S.E. Jakes popping in today with the tour for her long awaited release Running On Empty, we have a great excerpt and a brilliant giveaway so check out the post and leave a comment to enter the giveaway! ❤ ~Pixie~ 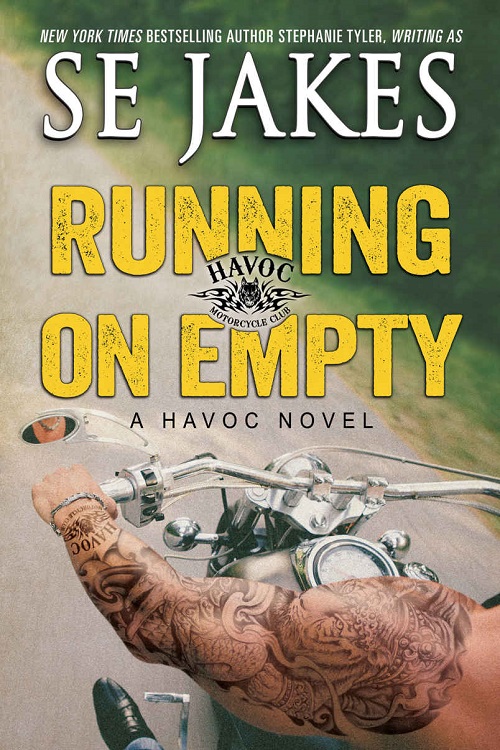 After years of running wild, Linc might’ve finally run out of road.

After a brutal capture at the hands of the Heathens Motorcycle Club, Linc is just trying to heal, mentally and physically. But he’s got men in his life who are complicating everything. There’s Mercy—a Havoc MC biker and the man he is falling fast for—plus an undercover ATF agent and a rogue Havoc member.

But Mercy’s keeping him at arm’s length, and Linc is spinning. In an attempt to regain his equilibrium, he heads to the bar where he first met Mercy. Night after night, he escapes Havoc bonds and continues down his merry path of mayhem . . . mainly in the hopes that Mercy will give chase.

Since Linc’s capture by his old MC, Mercy’s been dealing with the fallout of his guilt. He’s trying to give Linc space and still watch over him—all without Linc’s knowledge. But with Linc’s old job calling and a threat to Havoc MC heating up, can they make their way back together?

What you do to survive

When members of the Heathens Motorcycle Club first shoved Linc into the cell in the basement of their clubhouse, he’d asked, “Why?”

“You’re our gift to Havoc.” Bones smiled, and Linc resisted the urge to lunge at him, because it would only rip his arms out of their sockets. He’d already tested the mettle of the chains.

He could pop the cuffs, but he was surrounded. So he was biding his time, trying not to go fuck-nut crazy and hoping that sooner or later, members of Havoc MC—or at least his best friend, Rush, or his brother, Bram—would figure out where the fuck he was.

Or maybe Mercy. Mercy, a Havoc MC member, bail bondsman and the man Linc was currently sleeping with. But Mercy probably thought he’d flaked and run—that was his rep, after all, and he’d never tried to change it. Couldn’t. Also, he’d never wanted to stay anywhere the way he wanted to stay at Havoc.

The longer he was kept in the basement, the more he overheard. First it was just “Geoff” and then, “He’s Mercy now—what the fuck is that?” and then “This’ll teach him.” And over time, he was sure he’d convince himself a hundred times that he didn’t hear anything.

He knew what Mercy’s weight felt like on him, what the man’s tongue did to him, but he’d never known Mercy’s real first name. Mercy had never offered to share. Linc never pushed. When he’d been with Mercy, all he’d seen was a man who had his shit together. He’d never learned more about Mercy’s troubled past . . . it was only now he learned that, somehow, it was tied to his own kidnapping by the Heathens.

What Linc did know—he’d gone out on his bike, the one he’d been restoring with help from some of the Havoc guys, and he hadn’t planned on going far, but it’d been a nice night for a ride and he’d gotten caught up with the feel of the bike under him. Mercy was working out of town and Linc hadn’t needed to rush back.

He’d never felt the need to rush anywhere, so to think about Mercy like that was definitely weird for him.

And that’s when he’d gotten the call . . . and that’s the point when everything changed. Instead of turning around and heading back to Shades without stopping, he’d pulled into the closest gas station to stop for a piss and a drink. He’d thought about texting Mercy to explain but he couldn’t. Instead, he’d texted him a picture of the sunset, which was ridiculous and sappy but fuck it, Linc had never held back shit. Couldn’t start now just because he’d started to . . . like . . . Mercy.

Yeah, like. That’s as much as he’d been willing to say. Plus, he still owed the guy bond. And he’d gone over the state line, but hell, he was coming back.

At least that’d been the plan. Getting jumped by asshole Heathens definitely hadn’t been. And even though Linc had fought, the shit they’d pumped him full of took effect before he could get in many punches. He did break a couple of noses though, he’d been told later as they kicked the shit out of him while he was still too numb to give a damn.

Now, with not so much as a goddamned Advil for two days, he gave a shit. After thirty-seven days, he was used to the pattern. They’d drug him up, beat him, torture him, and then nothing, because they wanted to watch him detox from whatever strong painkillers they were giving him to keep him pliant. And his body did, but not in a way that satisfied them.

Linc didn’t want to disappoint them, but hell, he was never the one with the addictive personality. That was more his brother Bram’s thing, and Bram was careful to not expose himself to shit like that. Linc liked pot and booze and feeling mellow, but he’d lived without it for long stretches of time—in the Army, when he was broke, when he felt he needed to make changes.

He’d kept track of how long the Heathens had kept him prisoner in their compound, by marking the cement of the cell floor, happy with himself that he was still semi-sane. They fed him, but half the time the shit was drugged too, and Linc was fucked enough without drugs. They’d never sat well in his system, which meant he slept a lot, which meant his whole keeping-track-of-the-days thing could be slightly off.

And, in between drugging him with whatever they got their hands on and Linc being alternately passed out and beaten, Bones would sit with him and tell him that he was Mercy’s brother, that he’d killed one of Mercy’s lovers before . . . and that there was a grave dug for him already, right next to Mercy’s first lover.

But that hadn’t been the worst of it, not by a long shot. Because Bones would detail exactly how that first lover had been killed. Excruciatingly vivid detail. And then he’d taken Linc on a field trip—not once, but several times—to the graves. He’d even threatened to make Linc climb into his, to make sure it fit.

In Linc’s mind, that was the worst thing they’d done to him, but it definitely hadn’t been the only form a torture. For men who hated fags, they sure hadn’t minded fucking him. When Linc had pointed that out, he’d gotten beaten for his efforts but hey, he hadn’t been there to make friends.

He’d never thought the POW training he’d gotten in the military would come in so handy in civilian life. Or that the training Castle had insisted he go through would be what got him through this hell.

But something different was happening now. He heard loud voices—Bones yelling at someone. Typically, they kept it quiet down here, because that added to the atmosphere of never knowing what would happen and when it would happen.

Something always did, though. Half the time he was too zoned out to care what the fuck they did to him. He kept his mouth shut and took what they gave him.

Today though, he refused to let himself ignore the yelling.

Today, for the first time in thirty-seven days, he had hope.

SE Jakes writes m/m romance. She believes in happy endings and fighting for what you want in both fiction and real life. She lives in New York with her family, and most days, she can be found happily writing (in bed). No really… To celebrate the release of Running Blind, one lucky person will win an ecopy of Running Wild, the first book in the Havoc series!

(Entries close at midnight, Eastern time, on May 4, 2019. Contest is NOT restricted to U.S. entries.)

One thought on “Running On Empty by S.E. Jakes Blog Tour, Excerpt & Giveaway!”