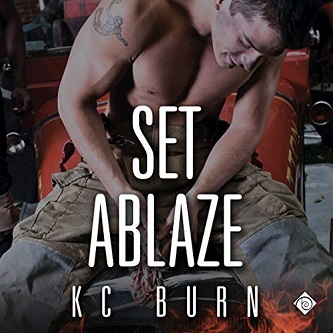 Blurb: California firefighter Hayden Hurst is starting to realize there’s more to life than fighting fires and drinking with his buddies. He has room in his home and his life for someone special, but no one has stood out among his hookups. And while he’s out at work, admitting he’s gay is very different from showing up at social functions with a man. He’s afraid that’ll be too much for his less-than-accepting “friends”.

Broadway dancer Jez Bouchet hasn’t been mistaken for straight since he was gay-bashed at 17. After getting a lucrative job offer in Hollywood, he uproots his life in New York and drives to Los Angeles. His brother, who is Hayden’s best friend, arranges for him to crash at Hayden’s place.

The attraction between Hayden and Jez is unexpected but fiery, and they succumb before they’re even sure they like each other. But Jez hates Hayden’s homophobic friends, and Hay-den knows Jez is too flamboyant for him to fly under the radar. Then there’s the complication of Jez’s brother.

Despite those hurdles, they fling themselves into a relationship. But Jez has secrets: a tiny spoiled dog and a determined stalker. If he doesn’t come clean, he might torch their burgeoning relationship before it has a chance to bloom.

Review: Set Ablaze is a standalone book by KC Burn and narrated by Darcy Stark. I was looking forward to this because I’ve enjoyed other books by Burn in the past, I really gel with Burn’s writing and there isn’t an audiobook performance that I didn’t enjoy.

The story starts with firefighter Hayden Hurst, he’s very much a closeted man who is afraid of what the macho, homophobic men in his world of firefighters think of him. When his best friend, who is also a fire fighter from another from another station, wants Hayden to take in his baby brother as a tenant, Hayden feels that there is no reason to say no. Then he meets Jez – again, because he did know Jez briefly when they were kids. Jez challenges everything about Hayden and his closeted lifestyle.

Jez refuses to be anything other than the man he his. His life was made hell because his family could never accept the fact that he is gay. He has been beaten for it, he has been ignored by everyone but his family and his life has been generally shitty. Except he was able to make a better life for himself in New York. It wasn’t until he moved back to California for a new and exciting job that he sees why he left California in the first place, as well as realising that he has been seeing his brother in the wrong light, he falls for the closeted Hayden, and then discovers that Hayden has a few homophobic a-holes for “friends”.

In terms of the audiobook, the narration was fantastic and probably one of my favourite things of the whole audio experience. I feel that this is one of those books that I would enjoy more listening to the audio than if I had actually read the book. I’ll get to the reasons why soon enough. Overall, there wasn’t anything that I didn’t like about the performance of the book, although I felt that it was held back (I can’t think of a better word) by my feelings about the plot of the book.

I liked the book for the most part. The closeted firefighter was an interesting, I loved getting to know Hayden. Jez was also interesting because this is a man who has clawed his way back from adversity and is someone that he wants to be and loves himself as a person. My biggest issue, however, was some of the threads of the plot seemed rather weak. I don’t want to give spoilers, but the men that surround Hayden, in particular, Jez’s brother and his motivations, aren’t particularly strong. Which wouldn’t normally matter for many minor characters. But these guys influence everything in how Hayden sees himself and his place in life and for that reason they needed to be stronger, or at least they needed to make more sense a lot quicker. Yet, in saying that I like how the story arc went and it was, overall, enjoyable.

If you’re into an angsty, closet case type of story, this is probably a good one for you.