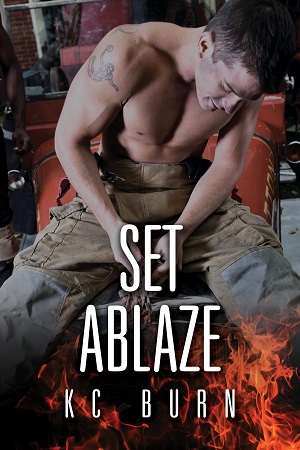 Blurb: California firefighter Hayden Hurst is starting to realize there’s more to life than fighting fires and drinking with his buddies. He has room in his home and his life for someone special, but no one has stood out among his hookups. And while he’s out at work, admitting he’s gay is very different from showing up at social functions with a man. He’s afraid that’ll be too much for his less-than-accepting “friends.”

Broadway dancer Jez Bouchet hasn’t been mistaken for straight since he was gay-bashed at seventeen. After getting a lucrative job offer in Hollywood, he uproots his life in New York and drives to Los Angeles. His brother, who is Hayden’s best friend, arranges for him to crash at Hayden’s place.

The attraction between Hayden and Jez is unexpected but fiery, and they succumb before they’re even sure they like each other. But Jez hates Hayden’s homophobic friends, and Hayden knows Jez is too flamboyant for him to fly under the radar. Then there’s the complication of Jez’s brother.

Despite those hurdles, they fling themselves into a relationship. But Jez has secrets: a tiny spoiled dog and a determined stalker. If he doesn’t come clean, he might torch their burgeoning relationship before it has a chance to bloom.

Review: Jez decided to move closer to his brother when his crazy ex got crazier. He had had a rough life growing up. His father was one nasty piece of work and his older brother got him away from it all. The problem was it also meant he hadn’t see his brother in quite some time. So the move to California was spur of the moment shock. Then his brother told him he had the best place to stay until he found one for himself. He just hadn’t expected, Hayden.

Hayden wasn’t in the closet so to speak but he kept his mouth shut around some of his so called friends. Letting his best friends little brother stay would not be so bad. Well that is until he caught site of little brother, and damn if his heart didn’t stutter.

It would seem Jez had man secrets although one of the tickled Hayden quite a bit. A pug named Fang was quite adorable. However the stalker was not. I had not had a chance to read to many stories by this author and wasn’t to sure what to expect. In fact I had previously read one that didn’t work with me, so when I started reading this story lets just say my surprise was there. Excitement, danger, and some hot sexy times are just a bit of what you get in this book. I absolutely loved Jez. He was a sweetie with a hard past. I couldn’t put the book down until I finished. I can tell you that this one will be read more than once.

I got a big kick out of this story and shed some tears as well. I loved this book and would definitely recommend it.