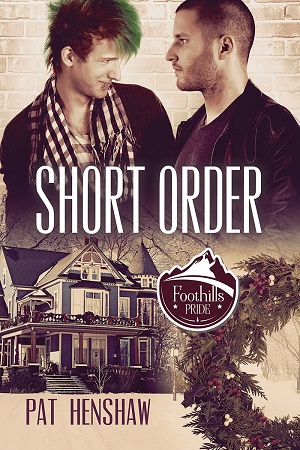 Blurb: When recent horticulture graduate Dr. Fenton Miller arrives in Stone Acres, California, he thinks his only concern is which job offer to accept after spending the holidays working at his cousin’s plant nursery. But after he rents a room from another shorter-than-average man, sous-chef John Barton, Fen falls in lust.

While he’s attracted to Fen, John’s got bigger concerns when two men from his past arrive in town and pressure him to return to San Francisco. Although John tries to stop Fen from getting involved, Fen realizes his lover is in trouble and is determined to protect him.

As the holidays get closer and Fen makes his own enemy, the joy of the season gets lost in the ill will around them. To ensure love triumphs, Fen and John must stand tall to show that short, dark, and handsome is a recipe for love.

Review: For those that have been reading Pat Henshaw’s Foothills Pride series, you won’t be disappoint. Just as I had expected, this was a sweet and lovely story that was exactly to the standard that I have come to expect from the world that Henshaw has created. For new comers to the series, you don’t necessarily need to read the series in order, but I would recommend it. I still think that this series in comparable to Carol Lynne’s Cattle Valley series.

The story follows Fenton Miller, he’s recently graduated after completing his PhD. Unlike many PhD graduates, Fen is going to relax and work at his cousin’s plant nursery over the holidays while he decides which job offer he is going to choose. However, all that is shot to hell when he meets local sous chef, John Barton and there is an instant attraction between the two men. The chemistry is off the charts amazing and the two characters not only develop well throughout the story.

Other than really liking the book, I have to say that Fen at first was hard for me to relate to and being that I have a PhD in marine microbial ecology, that’s just weird. It’s mostly because he is repeatedly introduced as Dr Fenton Miller. Yes, it is true, he is a doctor being that he has completed his PhD. However, in the real world it is normally insufferable people that do this. There’re a couple other things that I didn’t really get on board with immediately with Fen, yet in the end he grew up a lot throughout the book and I absolutely loved him. Yet he compliments John, who is wonderful character that I fell in love with and was able to relate to immediately. John makes Fen a better person and I’m glad they got their happily ever after.