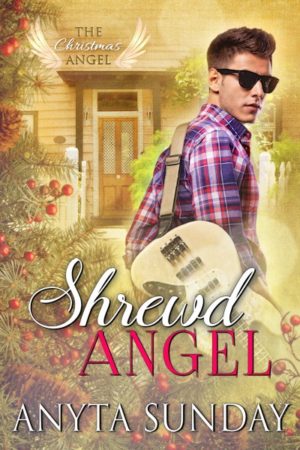 Blurb: Pax Polo is the swashbuckling guitarist for Serenity Free.

Correction: Was the swashbuckling guitarist for Serenity Free.

Now he sports a black eye and his bros have kicked him out of their band—three weeks before Christmas. It’s an unfamiliar kick to his over-inflated ego, but . . . whatever.

Thanks to some stellar eavesdropping, an unexpected angel ornament, and a bribe to open for his favorite band ever, Pax will weasel his way back into his mates’ good graces.

All he has to do is friend Clifford, the neighborhood man-shrew, for the summer. Distract him a bit so Clifford’s younger sister can sneak around.

It sounds like a piece of beginners Beethoven. Jolly good fun.

Because, Pax totally knows how to friend people. He has heaps of friends. This shrew’s no match for his shrewd ways. Or is he?

Review: Pax pretty much looses everything just right before Christmas, including the one job he loved. Playing the guitar is not really a job but an enjoyment I would say. He has to figure out how to get back in with his buddies. He is the ultimate medlor for one and he has a plan. He just hadn’t planned on Clifford.

Clifford has his own problems. Two that have their eyes on his sister, not going to happen. Where as Pax is trouble and kind of a mess, Cliff it the exact opposite. He is a bit grumpy and well you will see. Now Pax has his eye on Luca getting Cliff’s sister, however Henry would get Pax what he wants.

What is Christmas without a bit of magic, a boring Christmas is what I would say. However not so with this story. Although the first half of the story, I wasn’t really seeing to much of a romance between our two guys. The pace to this story was a too slow in my eyes and didn’t really keep my attention like it should have. However the romance was just a bit slower than that. It made the book feel much longer than it was. I am afraid that my attention wavered quite a bit and didn’t entertain me like I had hoped. Now after the first half, the heat between the two did get intense. The angst that Cliff had when he found out the reason for Pax’s attention was a bit more expected but then again what does one expect. If I had to pick my favorite character in this story, I would probably pick Cliff. He is a grumpy young man who has had a sad past. He just pulls you in a bit more than Pax. Pax just could piss a saint off. He is very quirky. Although I didn’t much care for tricking one so that the guys could get to know an underage girl was a good sign. Also the bribe was a bit much. So there were parts I liked and parts that I could have done without.

Overall I would say it is an enjoyable read but I find that I didn’t really care for it. The author does have an amazing gift at telling a story. However it felt like things were added in that could have been done without. It didn’t really have that much of a Christmas element to it, except for the magical ornament or what ever it was suppose to be. I also didn’t care for the Shakespeare theme that I felt was going on.